Petitions for elective positions on the October 3rd city of Memphis ballot continue to be pulled, and there has been one major surprise of late — a switch of intent on the part of city council candidate Cody Fletcher, who has withdrawn his petition for the Super-District 9, Position 1 council seat and has picked up another petition for the Super-District 9, Position 3 seat.

The change does not alter the geographical location that Fletcher, a University of Memphis development specialist, hopes to represent, but it certainly shakes up the dynamics of races for the two council positions. 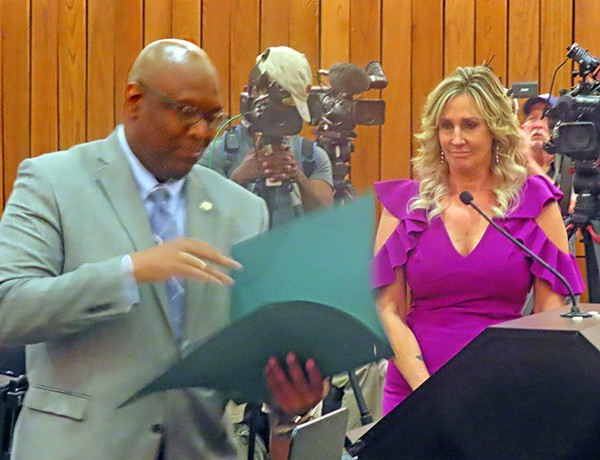 Fletcher now finds himself essentially in a mano-a-mano battle for the Position 3 seat with Jeff Warren. It remains to be seen whether the shift, recommended by consultant Brian Stephens, who advises both Fletcher and Carlisle, actually increases Fletcher's chances since he and Warren, an early and well-established entry in this year's election, also draw upon similar bases of support.

,
• As previously noted in this space, the Shelby County Commission managed last week to approve both a budget and a tax rate, thereby beating the timetable of preceding commissions, which generally were still wrangling well past July 1st, the traditional beginning of a new fiscal year.

One longtime observer of county government isn't so sure that such promptness was called for or even desirable. Jimmie Covington, longtime reporter on Shelby County government for The Commercial Appeal, before his retirement some years back, still keeps a close watch on county affairs.

In a Facebook post, Covington wrote: "Did the Shelby County Commission act contrary to state law when it approved this year's county property tax rate on third and final reading on Monday, June 24? For 30 years or so, the commission has been setting the tax rate after July 1 of each year.

"Every year since then, the county has been holding third reading on the rate after July 1. Last year, the rate was set on July 9. ... With a new county mayor, new county attorney, and eight new commissioners in office this year, did a mistake occur?"

"Establishment of county tax rate: It is the duty of the county legislative bodies, on the first Monday in July, or as soon thereafter as practicable, to fix the tax rates on all properties within their respective jurisdictions for all county purposes, except that in any county having a population in excess of seven hundred thousand (700,000) ... establishing tax due dates other than the first Monday in October each year, in accordance with §67-1-701(a), shall have the authority to fix tax rates for all county purposes at dates prior to the first Monday in July."

Apropos the seeming loophole of that last clause, Covington notes, "The due date for collecting taxes in Shelby County has not been changed from the first Monday in October."

Hmmm. "No foul, no penalty" is our guess.