Hidden cameras have been placed at certain spots around Shelby County to help catch and prosecute some of the trashiest criminals — illegal dumpers.

The cameras are trained on sites around the county that have long been hot spots for illegal dumping. The first camera went up early last week, and it has already aided in the arrest of an illegal dumper in Northaven. 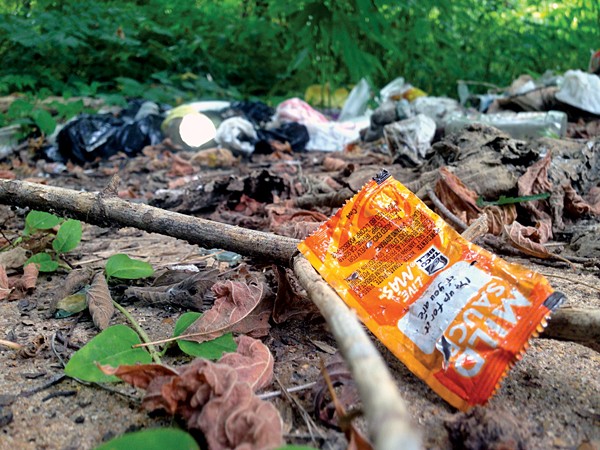 Shelby County Public Works Director Tom Needham applauded the work of the cameras and the Shelby County Sheriff's Office's arrest but said, "my goal is not necessarily to have [dumpers] caught in the act. My goal is to get them to quit dumping."

The county spends about $100,000 each year cleaning up illegal dump sites, Needham said. Three sanitation crews — each comprised of a county employee and inmates from the Shelby County Division of Correction — are dedicated to picking up litter and trash. That work includes checking on and cleaning up about 50 dump sites each month.

Needham explained that putting a stop to illegal dumping is about more than money. Dumping and litter are the beginnings of a cycle that could lead to rodents, health hazards, decreased land values, vacant houses, blight, and increased crime.

Southeast Memphis resident Willie Banks said about 50 to 75 tires lay in the backyard of the vacant house behind his. He said it would be hard to find out who put them there and that it would probably take the city "forever to correct the problem."

Banks is a member of the Tamble Terrace Neighborhood Watch program. Cutting back on littering and dumping are high on his priority list because he's seen the cycle in action: litter becomes blight, people move away, and then the vacant houses bring criminal activity. He wants an anti-litter program in Shelby County Schools but said the cameras "are a good start."

"We'll take any help we can get," Banks said. "If we can get everybody on the same page, we can make a big difference. [Litter and dumping] are a bigger problem than people think."

The idea to install hidden cameras came from a citizen at a public meeting in 2012, Needham said, as the county was weighing the option to begin countywide trash collection. Shelby County commissioners passed on trash collection, but Needham and his team remembered the camera idea.

At first, they put up game cameras, which are used around tree stands or other hunting sites to let hunters know what kinds of animals are in an area. But those cameras did not offer the level of detail needed to aid in a criminal investigation, Needham said.

The cameras installed now are from California-based Q-Star Technology and are rugged, solar-powered, and produce high-quality images that can clearly show faces and vehicle license plates.

Last week's dumping arrest came after an eyewitness told police that people in a burgundy truck dumped 12 bags of trash at the entrance of Meeman Shelby Forest. That same truck showed up in pictures from the hidden camera at the illegal Northaven dump site.

Amy Bazarte admitted to both illegal trash dumps after she was interviewed by police and shown the pictures of her truck. She was charged with two counts of aggravated criminal littering.

The charge could come with fines or up to 160 hours of community service (either picking up litter or working in a recycling center) and picking up the trash she dumped.

More cameras are on the way, Needham said, but he wouldn't say how many or where they will be posted.