Hi, my name's Chris, and I'm an authentic hillbilly. I grew up on a farm in the Appalachian foothills of Tennessee. I watched Hillbilly Elegy on Netflix so you don't have to.

The film is based on the book by J. D. Vance, which is subtitled A Memoir of a Family and Culture in Crisis. The book became a bestseller during the run-up to the 2016 election, and became a political touchstone for pundits trying to explain the appeal of He Who Must Not Be Named to the white, rural voters who put the Orange Menace in the White House and the country on what we now know was the road to ruin.

The story begins in Jackson, Kentucky, in 1997, with a tinny voice on the radio declaring: "In an age of prosperity, the American dream seems out of reach." But here's the thing: Vance is an Iraq War veteran and graduate of Yale Law School whose Wikipedia entry lists his occupation as "venture capitalist." He was born into a working-class family, but he's not exactly someone for whom the American dream was "out of reach." He succeeded! 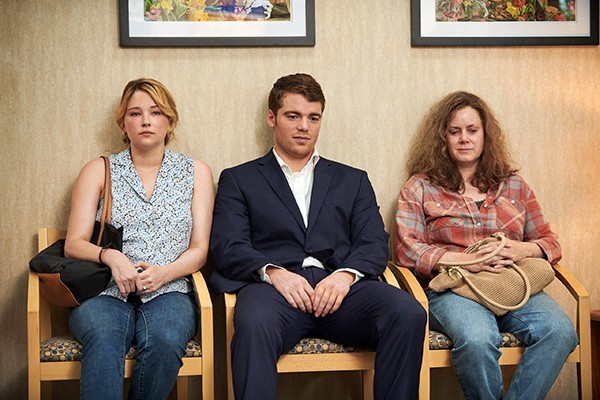 Maybe that's why Hillbilly Elegy seems so vacant and shallow. It wants you to have sympathy for the hard lives of these characters, who are all based on Vance's real family, but it cannot bear to turn its gaze on the deeper question begged by all the scenes of violence, drugs, and squalor — what has gone wrong here? Why are these people so screwed up?

From the start, the dialogue reveals a tin-eared writer. "Where you goin'?" asks the grizzled old redneck.

"Don't get bit by a cottonmouth!"

The Grapes of Wrath this ain't.

A few minutes later, J.D. is getting bullied by three local boys who hold him under the water until he almost drowns. Now this looks more like the hillbilly life I remember! Turns out, J.D. Vance isn't even from the mountains of Kentucky — he's from suburban Middletown, Ohio, and the actual hillbillies hate him. His grandparents moved from Kentucky to get jobs in the Ohio steel mills, which are closed now.

There's Mamaw (Glenn Close), J.D.'s mom Bev (Amy Adams), and sister Lindsay (Haley Bennett). A nostalgic sense of loss hangs over the family. Two generations ago, they were peasants pursuing opportunity in the big city. Now, they're the suburban poor with nowhere else to go. Mom did well in school, but got pregnant young and found herself stuck in a cycle of failed relationships, struggling to keep food on the table for her two kids while she's slowly being eaten away by the opioids she pops for stress. "We were all different in Middletown," J.D.'s voiceover intones. "Something was missing. Maybe hope."

And yet, there are no scenes in this two-hour film showing us the good things about rural life. It can be very beautiful, and the rhythms of the farm can be peaceful. Least authentically of all, not once does anyone step foot inside a church.

The plot, such as it is, revolves around grown-up J.D. (Gabriel Basso) trying to juggle career weekend at Yale with his mother's latest addiction crisis back in Ohio. Much of the actual conflict involves Mom and Mamaw's access to healthcare, which is the film's most authentic and relatable aspect.

In The Grapes of Wrath, John Steinbeck doesn't shy away from the causes of his Okies' miseries. It's the banks that foreclose on the family farm during the Depression, the orchard owners who pay starvation wages for backbreaking work, and the thugs who beat the union organizers into submission. When Bev, fresh off an OD, is kicked out of the hospital because she doesn't have health insurance, it's treated as another example of her moral failure, and an inconvenience for J.D., who has to be back in New Haven, Connecticut, for a job interview at a corporate law firm the next day. The real bad guys — the pharmaceutical companies who knowingly marketed highly addictive opioids to a population who are being worked to death by rapacious capitalists — are nowhere to be seen.

Directed by Ron Howard, Hillbilly Elegy is a deeply unpleasant watch. Everyone professes that "family is the only thing that means a goddamn thing," but they only seem to communicate by shouted insult. The cinematography is indifferent at best, except for the close-up of the heroin needle circling the toilet bowl. The pacing veers between leaden and excruciating.

But it's the film's attitude toward its characters that makes it truly odious. It's always been hard to be poor, but other chroniclers of poverty, such as Steinbeck, Charles Dickens, and Victor Hugo, left you with an understanding of the systems and people who oppressed the peasants. Hillbilly Elegy's ideology prevents it from looking at America that deeply. J.D. saves his mom and gets the job because he's just better than everyone else. For the people and the way of life he's supposed to be elegizing, life sucks, and it's all their fault.

Hillbilly Elegy is showing on Netflix.