Curb Market introduced its new deli, formerly a butcher, on November 18th. The change includes the introduction of several new sandwich options, each named after streets in Memphis, like Watkins and Cleveland, as well as a selection of meats and cheeses sold by the pound.

"It's just our way of celebrating this area," says Robert Humphreys, who has been the general manager of Curb Market since July.

The deli also includes a prepared foods section with items like chicken salad and spinach dip.

"There's not really a deli around in this area. So that was the biggest change that rolled out," Humphreys says.

The Garland, a chipotle chicken, bacon, and Swiss sandwich topped with spicy aioli, is the perfect mix of spicy and savory. Served on a fresh, soft ciabatta bun, it's the ideal option for those who want a little extra kick in their sandwich.

They also offer the option to build your own sandwich or get it as a combo with a side and a drink.

"I came up with the general ideas for all of them," Humphreys says of the new menu. "We brainstormed and tasted a lot of sandwiches and chose the ones we liked the most."

Curb Market has been a mainstay of Crosstown Concourse since it opened because it's the only place in the building for apartment tenants to grab basic grocery items like milk, cheese, and even some produce. It's also a go-to lunch option for a lot of people who work in the many offices at Crosstown. 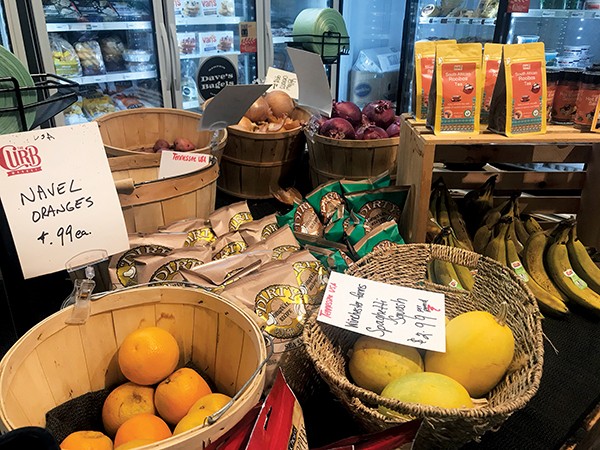 There's a freshly stocked salad bar and a hot bar that serves a rotating menu of soul food, Mexican food, Chinese food, and even some Italian — the lasagna is a personal favorite of mine. In the morning, the hot bar serves a mix of traditional breakfast items like bacon, eggs, biscuits, and more.

"The mac and cheese is the best in the city," says Humphreys.

Beyond the addition of the deli, Curb Market will remain mostly the same. So for those who, like me, have their own Curb favorites, there's nothing to fear.

"The biggest change is just that we're sort of trying to develop the groceries that fit for the area, the people who work here, and also for the people who live here," says Humphreys. "That's sort of been our concentration, as far as that area goes. The menu, or hot bar menu, also hasn't changed significantly."

"I really want to refocus on the groceries and just make this a place for not only people at work, but also the people in the neighborhood."

As Crosstown Concourse prepares for its holiday lighting celebration, Curb Market will also roll out some new sides and special items for the holidays in the coming weeks.

The new deli at Curb Market comes at a special time for them and the concourse at large because business is truly booming. Since the concourse reopened in 2017, more and more businesses, shops, and restaurants have moved to the area, bringing an immense amount of foot traffic as well as visitors from across the country and around the world.

Between the Green Room and Crosstown Theater, events and concerts regularly pull people into the building. As a result, many businesses in Crosstown Concourse, including Curb Market, have experienced tremendous growth in the short time they've been open.

"You know, people come from out of town," Humphreys says. "And they want to take their family to Crosstown."

Curb Market is located at 1350 Concourse, Suite 163, in the Central Atrium.