Cut to the Quick

Jed Jackson's show at the Dixon Gallery & Gardens, "Toujours l'Audace," runs the gamut — from propaganda and satire to masterwork and portraits of the best and worst of humanity.

Jackson is a tousled-haired tourist wearing a black sweatshirt and a day-old beard in Aides Memoires. Insets that float around the artist suggest that the memories of Europe that linger are not the grand palaces but encounters in coffee shops and crowds of French people on the boulevards. Saint Francis in Ecstasy, Bellini's 15th-century masterwork, is painted in a bubble on Jackson's chest at heart level at the center of this painting. Jackson has seen the world's best and worst.

What makes this accomplished painter's work most powerful is not his scathing satire but his ruthless, relentless drive to lay the soul bare, to get to the unsullied cores. U-Bahn ends the show on a note of hope in a painting in which Jackson's greens and reds read as vitality in a rumpled, sweaty bunch of Germans crowded into a subway. Look at the guy in the center wearing thick-rimmed glasses. The subway rider's eyes are closed, his face relaxed. In the midst of chaos, he seems calmed by some inner vision. U-Bahn is Jackson's portrait of a generation of young Germans who vie to rule not militarily but as one of the world's great centers for art. At the Dixon Gallery & Gardens through November 16th   Best known for his multimedia, collaborative community art projects, Richard Lou, art department chair at the University of Memphis, reveals a more poetic, personal side in his current installation, "Stories on My Back," at the Power House's Fuel Room Gallery. 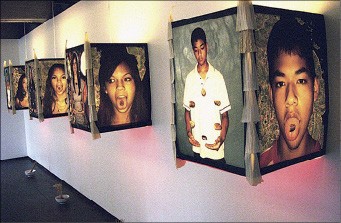 Fuel Room's crumbling stonework is a perfect venue for a show that is both personal and universal. At the back of the small room, incense sticks placed in bowls half-full of dried beans or rice honor Lou's Mexican mother and Chinese father. Cornhusks shaped around the entranceway bring to mind thatched huts and homes made out of materials at hand. The husks covering the long, lean light fixtures above the entrance and across the ceiling look like the scales or feathers of luminous creatures streaking over and through the modest home like Quetzalcoatl, the plumed serpent god of numerous Meso-American cultures or, perhaps, a Chinese dragon bringing good luck and long life.

The small home is lit by four lanterns, each of which contains an image of one of Lou's four children juggling small stones imprinted with a single word. With the fewest words possible — "grind," "smooth," "river," "sounds," "uttered" — the stones capture the pleasure, pain, and flow of life. They also tell the story of Lou's father who practiced speaking English with pebbles in his mouth and became a respected mediator who settled personal disputes and represented family and friends before the Board of Immigration.

On the left side of the lanterns, Lou's daughters, Gloria, Maricela, and Magda, and his son, Ming, are back-dropped by aerial views of the world. A small stone inscribed with the family name rests on each of their tongues. The stones are deep red — red like the fiery temperament of Lou's Latin-American mother, red like the Chinese symbol for good fortune, and red, perhaps, like the blood that flows through generations of Mexicans and Chinese who successfully raised families, no easy task when living in poverty or near-poverty with little medical care.

As professor, mentor, and member of multiple groups encouraging dialogue among Memphis' Mexican, Asian, black, and white populations, Lou honors his ancestors by continuing and expanding their role as mediators. And he creates powerful artwork that shows us how to navigate our increasingly complex multicultural city and world. At the Power House through November 29th