Just past the front doors of a Medical District Shell station sits Memphis' first Bitcoin ATM — only the third machine like it in Tennessee.

Young and achingly complex, Bitcoin is an electronic currency created in 2008 by a still-anonymous programmer operating under the alias Satoshi Nakamoto. Bitcoin operates on a peer-to-peer network with no banks serving as middlemen between transaction.

Decentralized, too, the currency sneaks past economic barriers around the world. The number of retailers accepting Bitcoin surpassed 100,000 in 2015, according to figures gathered by digital payment processor BitPay.

With the assistance of ATMs, exchanging traditional currency for electronic cash is easier than ever. The machines, built by leading U.S. Bitcoin ATM network Coinsource, are the company's answer to naturalizing the buying and selling of the currency. Located at 967 Linden, Memphis' lone ATM joins 60 other machines spread across seven other states including California and New York. 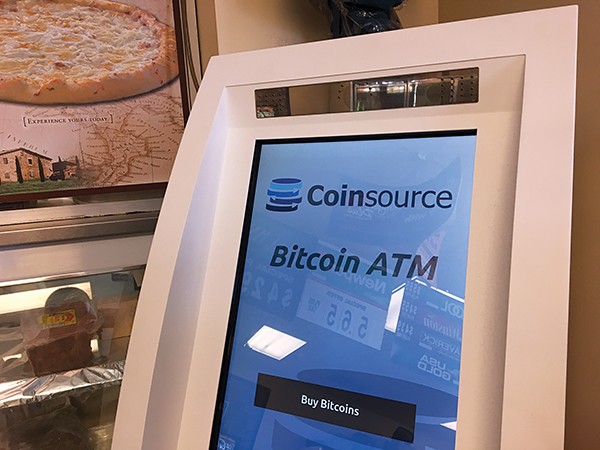 "Our reach in the South is growing," said Coinsource CEO and co-founder Sheffield Clark. "Many thousands of Americans have begun to realize that Bitcoin is becoming a stable payment option and a lucrative form of investment as well."

Understanding the currency's design is vital to using a Bitcoin ATM. At the machine, you'll select an amount to transfer. For larger amounts, you're required to scan valid identification. Coinsource will then send a code to your cellphone to verify the transaction. Finally, for first-timers, you'll need to create a Bitcoin wallet, where the currency is stored, to receive an electronic address. Rather than using your name, Bitcoins are exchanged anonymously from there.

Because it is still growing, Bitcoin's unpredictability garners a lack of trust from those who know little about the currency, said Max Garzon, a computer science professor at the University of Memphis. Each coin, broken down, is a growing file that carries a transaction history from its original owner. They're difficult to trace, though, and while they're even more difficult to counterfeit or steal, it is possible.

"To store a million dollars in cash takes a lot of space," Garzon said. "With cyber cash, there's no limit to how much you can store. But there's also no limit to how fast someone could take your money away. That's a security challenge."

The nearest Bitcoin ATM to Daniel Schirmer, a Chicagoan by way of Memphis, is a 10-minute walk from his apartment. While Bitcoin makes sense for the online marketplace, Schirmer said he doesn't see the currency finding a wider audience.

"I don't think there is a way one can simplify it to make it universally appealing," Schirmer said. "Bitcoin is not a simple currency. It is in fact very complicated and requires at least some personal research."

Memphian Gabe Esgro, however, looks forward to Bitcoin ATMs as a faster avenue to exchange between currencies. Esgro learned about Bitcoin six years ago and uses it for online gambling.

"So far the only way to get money I've won gambling has been to have a check mailed to me, which can take up to three weeks," Esgro said. "With Bitcoin ATMs, I could have my cash in 10 minutes."