A look at Dave’s Bagels and Benefizz.

Dave Scott of Dave's Bagels knows a good bagel when he tastes one.

The breakfast food to this Pennsylvania-by-way-of-New Jersey native is like grits are to many a Southerner.

"They are a staple breakfast food, and they've always been my favorite," Scott says.

A backpacking trip across the country that landed him in Portland, Oregon, left Scott feeling a little malnourished in the boiled bread department, so he decided to just make his own.

"Portland has a lot going on, but their bread game leaves something to be desired," Scott says.

Luckily for him, his best friend was a Jewish girl from Brooklyn.

"She was my best critic," Scott says. "It took me a year or two of messing with recipes until she said I should sell them." 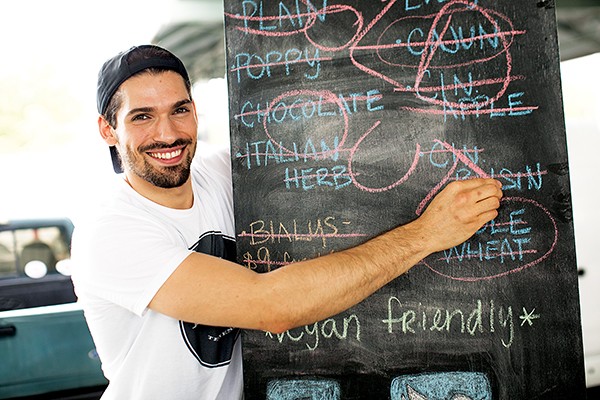 Bagel-making remained a hobby to the property manager and event coordinator, until he followed a girl to Memphis and needed something to do.

He got a similar response from his Memphis friends that he did in Portland — he should sell his handmade bagels.

He first took his breakfast breads to Curb Market on Cooper, where he would sell out of four to six dozen bagels every Sunday. He worked up to quadrupling his products and would sell out in under two hours.

The bagel guru has since moved to a bigger commercial kitchen in the Edge and hired a part-time employee, and he has gone from producing 500 bagels a week to 800.

He should receive a bagel former machine any day now, which will kick up production to 500 a day.

Then devotees can look to find him in more grocery stores across the city.

Right now his bagels are served at Otherlands, Strano!, the Bayou, Coffee Central in Southaven, and Broken Cup Cafe in Senatobia as well as at the Memphis Farmers Market on Saturdays.

"I use all natural ingredients and no preservatives," he says.

What makes his bagels so yummy?

"I use the boil-then-bake method. I don't do steam. I like delicious, chewy bagels. I don't like the cakey stuff," he says.

For more information, find him on Facebook at Dave's Bagels.

Steve Cantor has always been a software guy, since age 19, as a matter of fact.

Fast forward a few decades, and who knew he would be talking about bacterial mothers, probiotics, and second brains?

"I've been perfectly happy doing software," Cantor says. "I never considered doing anything else until now."

Cantor is the brewer/scientist behind the probiotic water kefir drink Benefizz, formerly Memfizz, which can now be found in more than 30 locations in both Memphis and Nashville.

It started with Memphis' favorite pastime — porch-sittin', with a friend from Arkansas who was bemoaning the fact that she didn't have the time her water kefir drinks deserved as far as meeting the requests from her Arkansas clients.

"Two days later, I woke up and thought wait a minute, I can do something with this, so I emailed [my friend]," Cantor says.

At first he sold bottles at his wife, Karen Lebovitz' coffee shop, Otherlands, under the name Memfizz. The popularity of the naturally carbonated, healthy beverage garnered him a business partner in the form of Southern Growth Studio.

Benefizz comes in three flavors — ginger, cranberry, and lemon. He hopes to offer grapefruit soon, but not until he can meet those demands with time and labor.

Changing the name to Benefizz not only creates a more globally marketable product, but it also celebrates the ultimate purpose of drinking something that's made from bacteria that likes to eat sugar.

"I don't make any health-care claims, but through all of my questioning and searching, I've come to accept that we are just hosts for bacteria," he says. "There's good and bad, and if you put more good bacteria in [i.e. probiotics], you can fight off the bad. There's only so much space and energy for bacteria to live in."

"They say the second brain is the gut," Cantor says. "I like to think that we offer something that tastes good that's good for lots of different things."

For a list of where Benefizz is offered, visit drinkbenefizz.com.