Dining With Myself: Dinner for One During Quarantine

Dining With Myself is a Facebook group for people who are dining by themselves during the quarantine. And they're coming up with strange dishes.

The group was designed to "bring people together" by sharing whatever crazy concoctions they come up with, says founder Emily Brown.

The group's tagline is "What do you eat when nobody's watching?"

"I want to see the bad side of what you're cooking," Brown says. "I don't want to see your pretty food. Show me what you actually eat."

The group primarily is for people who live by themselves so they'll "just not feel alone," says Brown.

She got the idea for the group after wondering what her friend who lives by herself in Fayetteville was eating. She was worried about her.

The group name was inspired by Billy Idol's song, "Dancing With Myself." Brown had asked a friend to photoshop Idol holding a fork, which became the perfect image for the group.

Dining With Myself now has 750 members, according to Brown. She's been getting about 20 new members a day.

People send positive comments even if the dish doesn't sound or look so great. "Everybody compliments everybody. It's hard to be offensive with food," Brown says.

"Somebody posted a slice of American cheese and Vienna sausage, and it probably got 20 comments."

The group gets lots of posts of salads and pasta dishes. "Comfort food."

People also share recipes. Brown recently got feedback from a chef friend in England, who shared fancy dishes as well as his "junk food." 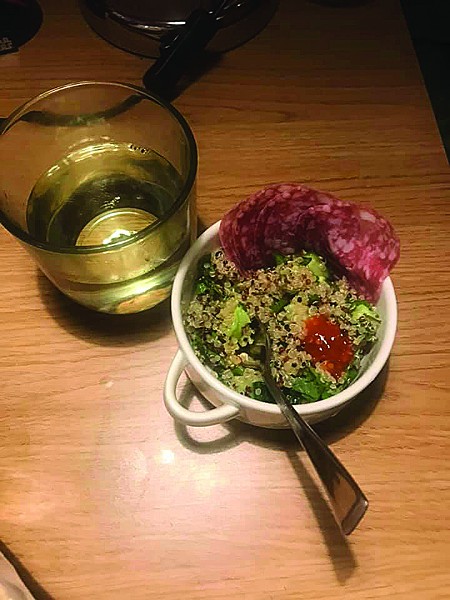 Dining With Myself isn't a political forum, Brown says. "We don't talk about anything else except what goes on in the kitchen."

Brown, who is on furlough from her job as a server at Amerigo, cooks for herself. "I can do fancy. I can make scrambled eggs. I can go across the board. It depends on the kind of effort I want to make," she says.

She's made Crabmeat Justine from the legendary Memphis restaurant, Justine's. Her favorite go-to dish is "roasted salmon and asparagus."

She has a large pantry. "It's the only big closet in my house."

As for her friend in Fayetteville, she's doing fine. She told Brown she recently prepared a dinner consisting of "fake crab, olives, Ritz crackers, and a glass of wine."