I want my MTV! The sentiment may seem dated, but many of us feel the same tug: to regain that sense of discovery we had when new music cascaded out of the screen, all day. Yet the network's concept, which seemed so revolutionary at lift-off in the 1980s, had difficulty profiting from its innovation, and phased out most of its music-only content more than a decade ago. And honestly, by then we were tired of all the hair metal anyway.

Still, the desire for that viewing-as-discovery experience has remained, and that's what the Memphis-based DittyTV network is targeting. Since 2014, the storefront studio on South Main has been plying the web-waves with new music, slowly amassing a global reach that most Memphians are oblivious to. And to top it all off, there's not a trace of hair metal. 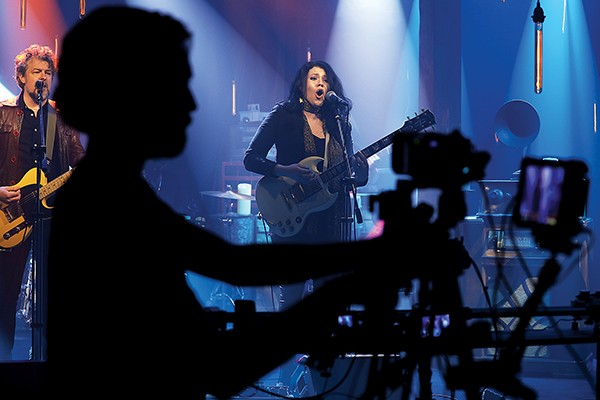 I first met Ronnie and Amy Wright soon after they relocated here from Washington, D.C., in 2010, looking for something beyond the Beltway life. Within a couple of years, they had fashioned the studio space that's still their headquarters, and were shooting professional live performance videos of bands. And they let bands keep the footage and the multitrack audio masters to use however they saw fit. It seemed too good to be true.

But their labor of love, DittyTV, had legs, especially when they refined their operation with a stronger identity. Being roots music buffs, framing DittyTV as an Americana network was a natural fit. For one thing, the term is increasingly inclusive. "Americana is a wide net, but you're not going to extremes like EDM or metal," Ronnie says. "It's not really a genre, it's a collection of genres that people seem to love from their 20s into their 60s and 70s. And our viewership bears that out. People write in and say, 'I put it on for hours and hours.' That's what I did in the MTV days. You just let it roll and use it as a soundtrack."

A major turning point was being invited to broadcast the last Folk Alliance conference held in Memphis before that organization's move to Kansas City. Ronnie recalls, "The first Folk Alliance we did was in 2012. We slowly grew, and now we're up to more than five million viewers every month."

"One of the things we're trying to do is expand onto other platforms," Amy adds. "Like streaming apps with their own channel lineups, or 'skinny bundles.' We're at an advantage, because we're already a digital network. A lot of the traditional channels have to convert their signal to a digital stream, and that's caused problems. But we're already digital."

And they've smoothed out the wrinkles of their operation into 12 programs of music videos, ranging from the earthy R&B of Soul Side to the solo songwriters of Campfire. Their 12-hour cycle is further peppered with music news and interviews, and at the heart of it are the live in-studio concerts that DittyTV started with. The live coverage of music festivals has only grown, now including Nashville's Americana Fest and Memphis' own Ameripolitan Music Awards, coming up next week.

Soon they'll be opening the space next door as a retail shop, Vibe and Dime, featuring LPs, musical instruments, and Ditty bling. "We'll have live music on the weekends," says Ronnie. "It's sort of a Swiss Army Knife. We can shoot interviews in the window." The Wrights hope the shop raises their local profile, which has not matched their exponential growth in other markets.

"Thirty percent of our audience watches from outside the United States. The network definitely has an international feel to it, but most people love the fact that it's in Memphis, including artists that aren't from here." And DittyTV has emulated the same independent spirit that animated other Memphis operations like Sun or Stax. "We can change and adapt," says Ronnie." Our programming is more fresh and organic. We're open to anybody that wants to submit a video."