Ewan McGregor stars in this fitting sequel to The Shining.

Stephen King famously hates The Shining. To be clear, he hates the 1980 Stanley Kubrick adaptation of his 1977 novel, despite the fact that it is widely considered to be one of the greatest movies ever made. I've never really understood why. I've read The Shining, and sure, it's a lot different from the movie. But different things work onscreen than work in print. That's just the way of the world. Both the film and the book work great for the medium they're presented in.

Maybe that's the gist of King's distaste. Writing is such an intimate medium. A writer can literally make you hear voices in your head. I'm doing it right now. King's book wasn't just a Psycho-type horror potboiler, it was about his own struggles with alcoholism. Seeing it abstracted into the third person had to be uncomfortable, especially given Kubrick's cold, analytical style. 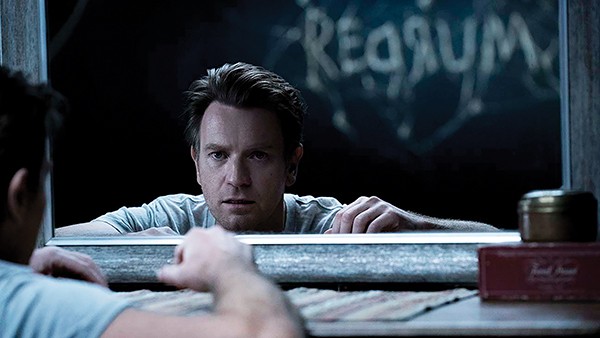 In the sequel, Doctor Sleep, which King released in 2013, the writer explored the implications of the end of The Shining. Jack Torrance, the alcoholic writer driven murderously mad by the spirits of the Overlook Hotel, has frozen to death, leaving his wife Wendy and son Danny alone. They move to Florida, and Danny tries to come to terms with his psychic powers and PTSD. Thanks to the help of the ghost of the ill-fated Overlook Hotel employee Dick Hallorann, Danny gets a handle on his shining. Not so much on the PTSD.

The film adaptation of Doctor Sleep is something unusual in the world of the Hollywood studio: an auteurist work. Mike Flanagan scores the remarkable triple bill of writer, director, and editor, something rarely seen outside the low-budget indie world. The older I get, the more skeptical I become of auteur theory, the notion that the director always puts his personal stamp on a picture. I think the interplay of talent on the production team is more important in the long run. But with Doctor Sleep, Flanagan makes a good argument, at least for the notion that he knows what he's doing.

Kubrick's work on The Shining was transformative, while Flanagan seems content to be translative to the text. And that's okay. His visual style is attractive and well designed, but not flashy. King's strengths in plotting really shine through. Every action is motivated and logical, even to a fault. Danny is played as a child by Roger Dale Floyd, who bears an uncanny resemblance to Danny Lloyd, Kubrick's Danny, and then as an adult by Ewan McGregor, who brings a satisfying depth to the performance.

The film's second act takes place in 2011, when Danny is taking after his alcoholic father, drifting from job to job, pounding shots and running lines on a weeknight. When he is drawn to a small New Hampshire town that seems to be perpetually bathed in autumnal night, an act of kindness by Billy (Cliff Curtis) convinces him to go to AA and clean up. He takes up residence in the town, and gets a psychic pen pal, a tween girl named Abra (Kyliegh Curran). But the pair discover that they're being stalked by a clan of psychic vampires called The True Knot, led by Rose the Hat (Rebecca Ferguson).

The funny thing about Doctor Sleep is that it is not so much a horror movie as a good, old-fashioned supernatural thriller. It's more Dark Shadows than Halloween. It's also pleasingly retro in its structure. Flanagan takes his time introducing all the players before they start bouncing off each other. Its three acts take place in three different time periods, but within the acts, there's a lot of craziness.

King has always excelled at bringing supernatural-tinged horror down to Earth by setting the action in the most mundane of places. Hitchcock liked to set the climax of his films in recognizable landmarks, like Mount Rushmore and the Statue of Liberty. King puts a climactic set piece in a crappy little New England state park. He has a knack for finding the haunted spaces in our collective imaginations: lonely highways, abandoned factories, musty attics. Flanagan is at his best when his characters are digging up bodies in a dusty wilderness, lit by truck headlights.

Doctor Sleep is not an all-time classic, but it is a solid genre piece for horror fans that will hold up to repeat viewings. At 152 minutes, it's long, but it doesn't feel self-indulgent. Flanagan adds to King's legacy and does no damage to Kubrick's masterwork by not slavishly imitating it. Yes, during the climactic scene in the crumbling Overlook Hotel, he recreates the elevator blood-flood gag. But come on, given the opportunity, would you be able to resist such temptation?