How many mass shootings will it take? Is one a week not enough? 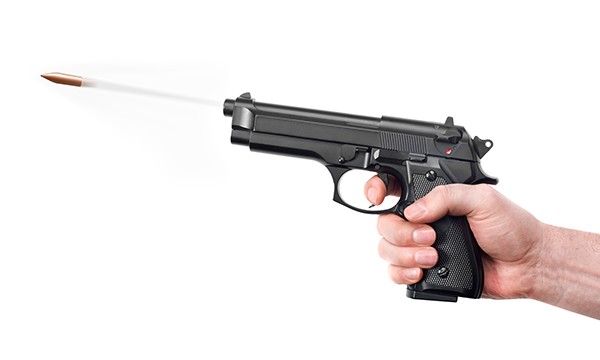 I'm ready for this summer to end. It's got nothing to do with the heat or school or the lack of interesting sports on TV. I'm just exhausted. I'm angry. I'm sick of reading, hearing, seeing news of people getting shot.

At the time I started writing this, if the United States put up a sign that says "__ Days without a Mass Shooting," the number would be zero. Hopefully it will have increased by the time anyone reads this, but I'm not holding my breath. (Finally, something more depressing than that sign on Union that tells us how long it's been since somebody died in a fire.)

First it was the white supremacist kid, with guns he wasn't supposed to be able to purchase. So we took down all the Confederate flags. Look everyone: progress! It only took 150 years!

Then it was a guy named Mohammad, who was either a depressed suicidal alcoholic or a freedom-hatin' Moozlim, depending on whom you ask.

Then a 57-year-old man shot up a movie theater in Louisiana, and he is being described as a "drifter." I can't wait to see the anti-drifting legislation no doubt being drafted this very moment.

What happens next week? What explanation? Which victims will we mark on our quickly filling Gun Violence Bingo cards? How many more people have to get shot before someone acknowledges that thoughts and prayers aren't going to make this problem go away? When is it going to happen here?

The N.R.A. has our redneck uncles convinced that the president is gunna take away our guns!!!!!!! — yet here we are — and it turns out, more guns does not equal more safety. Thanks, Obama.

But this isn't on the president. He's just as frustrated as I am. Truth is, our redneck uncles aren't the only ones the N.R.A.'s gotten to. Millions upon millions of dollars are being spent to influence gun policy, and it is working. But even that's only one facet of the problem.

So is racism. Untreated mental illness is a problem, too. Radicalization is a problem, as is sexism, and so on. Drifters might be a problem, I guess? But none of these things are THE problem. Guns are.

Guns are the bloody thread tying this miserable summer together. Weekly mass shootings should be unacceptable in a developed and civilized society, and it is the duty of those elected to represent us to do something about it. Or at the very least, act like they care.

Want to "put an end to these senseless tragedies"? Acknowledge the problem, and do something to make it stop. Say it by name. Say it with me: Guns. Are. The Problem.

Stop saying "guns don't kill people, people do." Would you say "Hammers don't put nails in walls, people do?" A gun's explicit purpose is to kill or wound. That's it. It doesn't cut vegetables or open mail or hit baseballs. It has one job. It is a problem, then, that the United States comprises four percent of the world's population but owns 42 percent of the world's civilian guns.

It's a problem that clerical errors and loopholes in the background check process cost lives and have ruined countless others. It's a problem that a felon can take his grandma to a gun store to buy him a gun "for being a good boy" (which he then used to kill his 8-year-old son and then himself).

It is a problem that, in some places, it's more difficult to purchase Sudafed or spray paint than it is a firearm.

It is a problem that these acts of violence are making people afraid, and their response is to buy guns. That's like sitting out in the sun to get rid of a sunburn.

It is a problem that people interpret the Second Amendment to mean they can and should walk around Target with assault rifles.

How can anybody say with a straight face that is what the "Founding Fathers" intended? I think there's a pretty good chance James Madison, if asked, would say "My bad, you guys, we totally left out a word. Why on earth do you need all these killing machines? This isn't what we intended at all. The future sucks."

It does indeed. And the worst part is, nobody's doing anything to fix it.