The event features a dog costume contest, a crawfish boil, and a dog parade through the woods.

Overton Park Conservancy and one of its partners, Hollywood Feed, hosts its inaugural Mardi Growl event this Saturday, featuring a Mardi Gras-themed dog costume contest, a crawfish boil with Local Gastropub, and a dog parade through the woods.

Melissa McMasters, director of communications for Overton Park, says the event was inspired in part by the conservancy's Halloween dog costume event in October and that she hopes to see creative costumes like she saw at that event, such as two "hot dogs" in a hot dog cart accompanied by humans dressed up as ketchup and mustard bottles.

"The costume contests always seem to attract a lot of extremely creative people," says McMasters. "So they're really fun." 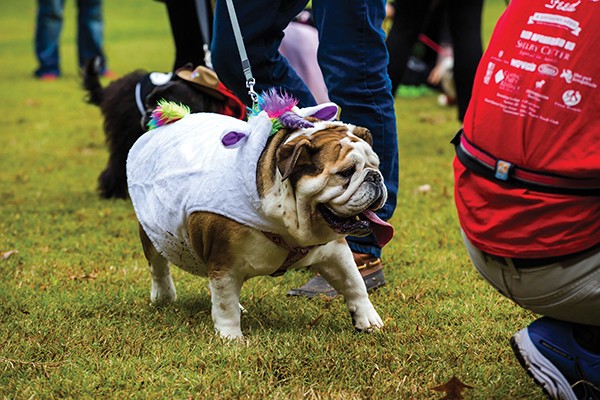 The conservancy will bring on three celebrity judges (Markova Reed, former WREG anchor; David Scott of Dave's Bagels; and Lucy Furr, graphic designer for Hollywood Feed) to determine the winners, who will receive prize packs from Hollywood Feed and a gift card from Second Line.

McMasters says that the members of the park are looking forward to thanking Hollywood Feed, who sponsored the construction of Overton Bark in 2012, and the dog lovers who enjoy the dog play area every day.

"We really want to engage the community that uses Overton Bark and give them something fun and a thank you for being such great supporters — and also to bring in some new folks who may not have visited before," says McMasters. "And it's also a great opportunity for us to work with Hollywood Feed. We always enjoy hanging out with them."