Judging from this year's crop of horror films, Americans must be longing for escape from something. I would say three films is officially a trend, and the three best horror movies of 2016 are all about being trapped in a claustrophobic space with someone — perhaps several someones — up to no good. First we were locked in a bomb shelter with John Goodman in 10 Cloverfield Lane, then neo-Nazi Captain Picard wanted to burn down our punk rock party in Green Room, and now we're trapped in a house with a psychotic blind man in Don't Breathe.

To be fair, the three "heroes" in Fede Alvarez's new horror film pretty much deserve what's coming to them. Rocky (Jane Levy), Money (Daniel Zovatto), and Alex (Dylan Minnette) are a trio of burglars, kind of like a Detroit version of The Bling Ring, enabled by Alex's access to keys and info from his father's security service. Alvarez, an Uruguayan filmmaker whose last project was a remake of Sam Raimi's classic Evil Dead, concentrates on building sympathy for Rocky, who lives in an abusive situation with her alcoholic mother and longs to buy her and her little sister passage to California. After a less-than-successful job, they learn of a sure thing: the last inhabited house in a dying neighborhood, where a blind Gulf War veteran (nameless, but played by Stephen Lang) is believed to be sitting on a huge stash of cash from an insurance settlement. After a little persuading, Alex agrees to help with one last job. 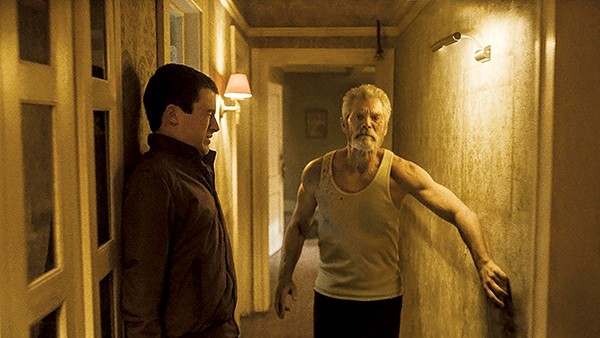 From the slavering Rottweiler guarding the house to the four locks on every door, the signs are that there's something worth guarding in this home, a relic of Detroit's better days. Once they're inside, our sneak thieves discover that the Blind Man is hiding more than just a stack of bills.

Alvarez's greatest strength lies in his eye for moody photography. He uses strategically placed light sources to paint Rocky and the Blind Man in chiaroscuro tones. When Alex and Rocky are trapped in a darkened basement, Alvarez uses the opportunity to crank the image contrast down as low as it will go, evoking claustrophobic feelings with only vague, moving gray shapes. He is also a master of timing, getting a lot of mileage out of opening doors at the perfect moment.

Don't Breathe can best be described as a series of steadily escalating variations on a theme. From being trapped in a ventilation duct with a rabid dog to slowly inching across broken glass, Alvarez is evoking the feeling of wanting to flee, but seeing your options for escape slowly dwindling. The effect is chilling enough to overcome a late-film flurry of false endings and the occasional disbelief-killing logical stretch. You may find the feeling of getting squeezed strikes an unexpectedly familiar chord.