Neck-and-neck races and a New Poll make for extra drama at the wire in next week's election.

Cutting to the chase (and never was a metaphor more appropriate), the city election of 2007 is generating both excitement and suspense as early voting proceeds toward its end this weekend and scarcely a week remains before Election Day itself on Thursday, October 4th.

Overshadowing the other races is that for mayor, which sees four-term incumbent Willie Herenton struggling to hold off major challenges by city councilwoman Carol Chumney and former MLGW head Herman Morris. A new poll by veteran pollster Berje Yacoubian shows just how tight the race has become.

Though issues are approached differently by candidates in the various races, there is a certain sameness in approaches being advanced to resolve key matters like crime and education and economic development. The key battles may be decided on other, more intangible grounds.

How much, for example, are voters influenced by cosmetic factors, like the fact that Herenton — part executive, part Marlboro Man, part street heavy — always photographs well, while Chumney's visage ranges unpredictably from bland to radiant, and Morris tends always to look like some African-American version of Mr. Monopoly in the board game?

How important are the candidates' presumed voter bases? When Herenton ran the first time, in 1991, he had the black vote — period. As it turned out, that was enough to overcome then incumbent Dick Hackett, who was likewise restricted to the white vote. The difference in a race that was won by 142 votes probably came down to the few hundred votes, almost exclusively white, siphoned off by professional eccentric Prince Mongo.

This time around, Herenton's base is again almost exclusively black, but — if a variety of extant polls can be trusted — he doesn't command the African-American vote with anything like the unanimity of 16 years ago.

Chumney has managed to claim a significant fraction; Morris may finally be making inroads with his fellow blacks; and even former Shelby County commissioner John Willingham insists that he has something in the neighborhood of 13,000 black votes committed to him. Indeed, Willingham has insisted in a variety of forums that Memphis' African-American population, along with the local Republican Party's endorsement, together constitute his main base and provide enough votes to win.

That claim is generally regarded as extravagant, considering that the former commissioner has never emerged from the lower single digits in anybody's poll results — a fact that in most estimations situates Willingham in the role of Mongo this year. If the three-way battle between Herenton, Chumney, and Morris is as tight as it seems to be, even one or two percentage points taken out of play could determine which of the three ends up on top.

To some extent, the reputation of the various candidates — deserved or not — will play a major part. Herenton still has credibility here and there in establishment circles, though his half-million-dollar war chest dates from earlier, more auspicious times.

Given that, in a time of widespread indictments of public officials for corruption, the mayor has been charged with no illegalities and that no one aspect of the city's government is in irremediable crisis, Herenton's decline in popularity is something of a mystery.

Perhaps, after an unprecedented 16-year tenure, he is merely seen by widening circles of the population as having overstayed his welcome. Whatever the case, the mayor's own actions have created the impression of desperation in his campaign.

That was how many saw his disclosure back in June of a still uncorroborated blackmail plot allegedly orchestrated by lawyer Richard Fields and other conspirators characterized by Herenton as "snakes." Tellingly, the mayor invoked racial solidarity on that occasion and did so again last week when, along with city attorney Elbert Jefferson, he sought to halt early voting on grounds of defects in the Diebold machines being used. 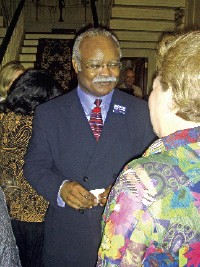 The claims reported by Herenton and Jefferson were minimal and anecdotal, and the mayor demurred when asked if he thought he or any other candidate was being targeted. When Jefferson met with the county Election Commission, he sought no longer to halt the voting but merely to reprogram the machines to minimize the possibility of error.

Not even Commissioner Shep Wilbun, whose own legal claims of machine error were a feature of the 2006 election, would buy the argument whole, however, and the commission ultimately employed some future-tense palliatives that left the current situation and the ongoing early-voting methodology essentially unchanged.

Several days later, Shelby County commissioner Steve Mulroy, who was an early exponent of voting-machine reform, sat in the commission auditorium and ticked off the various safeguards already available to voters, including the wherewithal to enlarge the image on the Diebold screen and to review and alter one's votes on a final screen.

Mused Mulroy about the mayor's actions: "It's hard to imagine that his motive would have been actually to stop early voting, because he must have realized there was no real legal argument for doing that on the merits. So it's hard to know why we would do it, whether he was trying to mobilize his base."

At that point, another commissioner asked for his attention on another matter, and when Mulroy returned to the issue, he decided not to offer any further conjecture about Herenton's motives. Not for the record, anyhow. But he stated flatly:

"There was no valid basis for stopping the early vote." 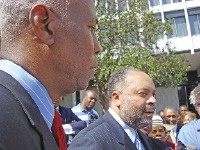 Since Herenton had specifically invoked the specter of alleged former machinations against black candidates — Harold Ford Sr. in vote counting for Congress in 1974 and himself in the tabulations of 1991 — Mulroy's one guess as to the mayor's motives — solidifying his base — seemed reasonable.

But the prospect of further erosion among white voters was all too possible, and there was above all else an air of desperation to the mayor's claim. Many who had wondered about Herenton's vulnerability now saw it apparently confirmed by his own action.

Chumney, a vocal critic of the mayor's (and of her own council-mates) from the very first year of her tenure on the City Council, had proved her credibility as a candidate in a variety of polls, taken over a period of months, in which she either led or was tied with Herenton. The most recent sampling, taken by pollster Yacoubian and featured in this edition of the Flyer, shows her well within striking distance of Herenton, with 28 percent to his 30 percent.

Meanwhile, Morris, who has spent months playing catch-up, despite significant support among influential Memphians and potential appeal across racial and political lines, would seem to have begun mounting a long-expected climb in the polls, with a 21 percent showing in the Yacoubian poll.

Making the most of their candidate's belated momentum, Morris' handlers put out a news release on Tuesday, maintaining that the former MLGW head was actually doing even better with potential voters.

Said the release: "The polls we have seen show Herman Morris, Jr. is in a statistical dead heat with Carol Chumney, who led in early polls. The Morris campaign's internal poll shows a slight lead over her but the numbers are statistically insignificant because of the margin for error.

"The polls also show both candidates within striking distance of incumbent W.W. Herenton. However, only Morris has shown any significant movement in recent weeks — he is moving up even as Herenton and Chumney numbers are flat, which means they are losing ground."

All that, of course, remains to be seen. The point is that the race for mayor is very likely a three-way affair, despite late contentions by both Chumney and Herenton — the former's claims understandable, the latter's possibly strategic and disingenuous — that it's a two-way battle.

In District 1, candidate Bill Morrison, freshly lifted by fund-raising provided by political brokers Karl Schledwitz and David Upton, along with an endorsement by the ambitious new political-action group New Path, saw his chances boosted of ending in a runoff with early favorite Stephanie Gatewood.

Not to be counted out, either, was firefighter Antonio "2 Shay" Parkinson, who could boast labor support and endorsements from a variety of other sources.

In District 2, the main battle still seemed to be between early leader Brian Stephens and longtime political pro Bill Boyd, but newcomer Scott Pearce, buoyed by support from such diverse sources as social conservative Marilyn Loeffel and the AFL-CIO, is making a late charge.

District 4 is all Wanda Halbert's.

District 5 would seem to be solid for lawyer Jim Strickland, though environmentalist Bob Schreiber and Libertyland activist Denise Parkinson still nurse hopes of landing in a runoff.

District 6 is a free-for-all, with the only certainty being that Edmund Ford Jr., son of the currently embattled incumbent, will end up in a runoff with somebody — Reginald Milton, Ed Vaughn, and James O. Catchings being the most likely prospects.

District 7 seems probably safe for incumbent Barbara Swearengen Holt-Ware, though all three of her challengers — Preston Poindexter, Derek Richardson, and, notably, Veronica Castillo, have run energetic campaigns and are hopeful of landing in a runoff.

Super-District 8, Position 1 looks to be safe for controversial incumbent Joe Brown, but a well-supported Ian Randolph still has hopes. (No runoff here, though, or in any of the other District 8 or 9 at-large races.)

District 8, Position 2 is an apparent three-way between Trennie Williams, incumbent Henry Hooper, and Janis Fullilove, with the latter two gaining momentum — Fullilove on the strength of her name as a broadcaster and former secret-service man Hooper via support from the aforementioned angels.

District 8, Position 3? It's incumbent Myron Lowery all the way.

District 9, Position 1 is equally sewed up for incumbent Scott McCormick.

District 9, Position 2 is an even more crowded, contested affair than the mayor's race, with Kemp Conrad, Shea Flinn, and Frank Langston all maintaining early strength, and with Joe Saino and Joe Baier both committing significant resources for a late charge.

District 9, Position 3 is another battle royale, with the well-respected Desi Franklin, the well-endorsed Mary Wilder, the well-signaged Lester Lit and Reid Hedgepeth, and hard-working Boris Combest, the only black in the race, all preparing for a late surge.