Dream Safaris: Savoring the Treasures of a Difficult Year

A couple of months after the lockdown last March, my dad was diagnosed with acute leukemia. He was gone by August. It left a hole in our family and uncovered a secret: My mom has dementia. My dad had covered for her to the point that my siblings and I had no idea. With my dad gone, I moved into my mom's home to care for her.

I always said that dad was my mom's oldest child. It was a description he relished and often bragged about. He was fun. He laughed at his own jokes, usually because no one else did. Mom, on the other hand, was a pragmatist. The two of them together were a living sitcom.

There was the time they accidentally left the video cam running while touring on vacation. When they queued up the VCR to show the family their tour on film, the tape rolled and mom's voice said sweetly, "There's the town square," while filming a nondescript government building. Things changed dramatically as the camera jostled on the seat and mom's shrill voice said, "Turn left! Turn left! I told you to turn left. You ruin everything!" The camera slid back and forth on the seat filming the dashboard as the screeching U-turn was heard, followed by a single word from my dad, "Goddammit!"

You could hear a pin drop as mom shut off the VCR saying demurely, "I guess we left the camera on."

Everyone in the room simultaneously burst into laughter because those few seconds of video evidence encapsulated every single car ride with those two. Bar none.

Now, dad's gone, and when I moved in with mom, it was strange at first. She was my mom. But she wasn't my mom. She forgets what happened five minutes ago but remembers details from decades ago. When we made our traditional ravioli at Christmas, mom insisted that we could only use Italian sausage from Barzizza's Italian Meat Market. A Google search told me that the market hadn't been open for business in 50 years. I did find Dino's Meat Market off Chelsea on North Willett, thanks to Google. We went on an Italian sausage adventure. The meat market was not as mom remembered. It was the kind of place where you bring a deer you just shot to be processed. Not really a storefront, though they did sell us some sausage.

Mom asked, "Where are the meat cases?"

To which I replied, "Mom, they don't really do that anymore."

"Then where do people buy their Italian sausage?" 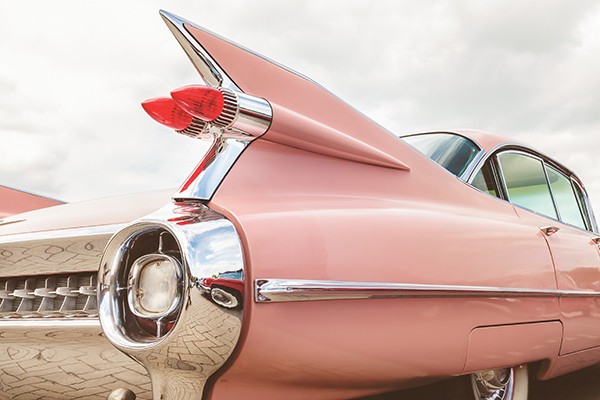 Then I realized we were near Tad Pierson's new digs. Y'all know Tad with American Dream Safari. He drives the pink Cadillac tours around town. He honks and waves while he's entertaining guests to our city. I turned the corner. His truck was a signal that he was home. We spent the day with Tad telling us stories and giving the nickel tour of his place. He showed us some weathered wood he'd found from a felled tree that resembled Trump's hair. It was fun. Mom's quest for bygone days turned into a magical adventure.

One activity she really likes is curb shopping. She calls the items she picks up from the curb "treasures." Recently, she hit a new low with this activity. While we were cruising for treasures, she said, "Oh, look. There's something red on the curb. What is that?"

I said, "A riding lawnmower."

"Mom. The guy is sitting on it and cutting his lawn with it."

"Let me get this straight. We are going to pull over, knock the guy off his mower, and load it in your minivan. Is that what you are proposing?"

"I guess we better leave it."

Even though the past year has been in the crapper, sometimes the best treasures are the ones you already have — like this extra special time with my mom.