At this point, Christopher Nolan is a lot like Led Zeppelin. Both the English director of brainy blockbusters and the deans of English classic rock had a talent for big, crowd-pleasing riffs. Nolan dominated the multiplex box office of the aughts and early teens the same way Led Zeppelin dominated album-oriented rock radio in the 1970s. And both Nolan and Zep are taken very seriously by both their fans and themselves.

Nolan and Zeppelin's technical mastery of their respective forms turned out to be mixed blessings. Jimmy Page had an idiosyncratic style that worked extremely well for him, but as the '70s gave way to the '80s, the audience was bombarded by mediocre imitators. Zep was great, but those who came after were not so great, and there were so many of them. Nolan likewise constructed a unique style combining classical technique with modern digital technology. It was great in Inception but not so great when it was regurgitated in The Maze Runner.

Nolan-itis hit the superhero genre especially hard. Somewhere on the backside of the two-hour mark in The Dark Knight Rises, watching a hyper-realistic depiction of a guy dressed like a bat punching out masked terrorists started to get old. But the grimdark wouldn't die. From Hunger Games to Man of Steel, assaultive mirthlessness was the order of the day. After Nolan hung up the batarang, Warner Brothers wouldn't make another watchable superhero movie until this year's Wonder Woman, and even Patty Jenkins' instant classic lifts the ending from The Dark Knight Rises. 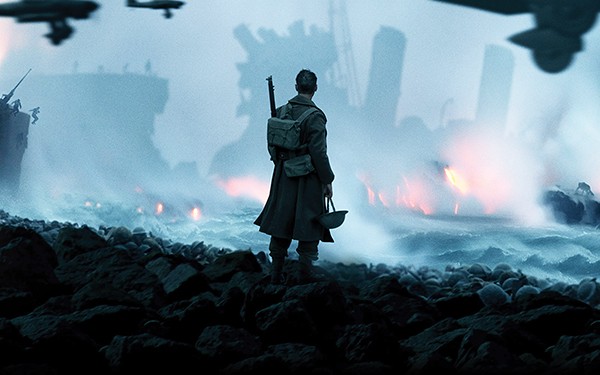 Rather than weeping because he had no more worlds to conquer after Interstellar, Nolan decided to go small — only small for Nolan means recreating the Battle of Dunkirk, IMAX-size, with as little CGI as possible. Artistically, it was a good decision. By bringing Dunkirk in at a brisk (for him) 106 minutes, Nolan rediscovers his gift for concision that made his early gems like Memento so pleasing.

Nolan sets up the situation swiftly and nearly wordlessly. It's May 1940, and Tommy (Fionn Whitehead) is a British soldier retreating from the Nazis in northern France. When his squad is attacked while looting for food and water in the abandoned French port town, he is left as the only survivor. Looking to find a place to relieve himself, he stumbles onto the vast beach where tens of thousands of British troops are waiting for rescue from the German blitzkrieg. For a moment, the assembled might of an army waiting to go home looks imposing, but once the German dive bombers arrive, their true vulnerability is revealed.

In real life, 400,000 British and French soldiers were trapped on the beach until an ad hoc flotilla comprised of practically every seaworthy vessel in the British Isles sailed to the rescue. Nolan's cast isn't quite that big, but I don't envy the extras wranglers who had to find places for everyone to relieve themselves on the French beach. Like Spielberg, Nolan has an almost Soviet talent for visualizing great movements of people. There is no lead actor, per se, in this film. Nolan's screenplay follows three groups: Tommy and his mysterious comrade Gibson, who repeatedly try and fail to get off the beach; the crew of the Moonstone, a modest pleasure vessel captained by Mr. Dawson (Mark Rylance) who volunteers to ferry soldiers across the channel; and a flight of Spitfires, led by Tom Hardy, whose numbers dwindle as they try to keep the Luftwaffe busy while the evacuation proceeds. The three storylines proceed linearly but at radically different paces until they all come together for a finale above, on, and below the English Channel.

Aside from Rylance's warm humanity and Cillian Murphy as a shivering PTSD case, the characterization is paper thin, but the plotting and editing is as tight as is expected from Nolan. From balletic dogfight sequences shot with IMAX cameras and real airplanes, to the horror inside a capsizing troop ship, the images he conjures are among the best of his career. There are also moments of almost accidental political relevance, such as when a squad of soldiers in a leaky boat has a miniature version of the Brexit debate, only with guns. Nolan's vision of war is not sweeping, heroic action and sacrifice. It's fear, foggy goggles, and ratty comms. The victors are the ones who make it home alive.