Let's hear it for chicken and waffles.

Chicken and waffles. Say it. Okay, so it doesn't flow from the tongue as trippingly as other dynamic duos like Batman and Robin or chocolate and peanut butter. But the two unlikely items have lots of fans and share a history featuring a cast of characters as diverse as Thomas Jefferson, Gladys Knight, and two Southern ladies named Alcenia.

Jefferson, it turns out, brought the waffle iron back from France, and documented cases of chicken and waffles in America appear shortly after. In the days after slavery, chicken and waffles were served on special occasions. Poultry was rare, and the poor, unable to afford a waffle iron, tended to eat pancakes. The dish entered the mainstream at Harlem's Wells Supper Club in the late 1930s, where it was served to late-performing musicians who missed dinner and weren't ready for breakfast.

Herb Hudson later took the idea to Hollywood, where he opened Roscoe's House of Chicken 'n' Waffles in 1976. The Wells Supper Club closed in 1999, but Roscoe's is still open with five locations.

Gladys Knight (sans Pips) kept the musical connection alive in 1997 by starting the modest franchise Gladys Knight and Ron Winans' Chicken and Waffles, which you can enjoy for yourself by taking a midnight train to Georgia (Lithonia and Atlanta locations, as well as Washington, D.C.). In fact, the main attraction, four Southern-fried jumbo wings atop a waffle, is called the "Midnight Train." Woo woo!

Memphis diners, do not despair. There are two chicken and waffles hotspots in our very own downtown. (A third, chicken-and-waffle purveyor, Onix, located at 412 S. Main, opened after this story's deadline.)

"Come in 7 to 9 a.m.," manager Sarah Hutchinson advises. "That's when you hear the best stories over Bloody Marys."

Sarah and Grace are a mother/daughter serving team. "All the guys on the street come by for Grace," Sarah notes. "Good thing you're here to keep an eye," I reply. "Oh, I'll cut them," she offers back. "And they know it." She smiles but is dead serious. 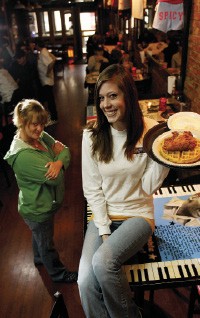 The dish arrives: a fried leg and thigh, with eggs and waffle to the side. The chicken flirts on the spicy side, while the perfectly round waffle is heaped with a golf ball serving of butter.

A few blocks to the north, chicken and waffles can be found at Alcenia's Desserts and Preserves. An unpretentious yet whimsically eclectic café awaits the customer here as does a hug, which I received from owner B.J. Chester-Tamayo.

The menu is all soul, including fried cucumbers, sweet-potato fries, and Ghetto-Aid (billed ominously as "very sweet Kool-Aid"). Saturdays feature a $10 brunch with a choice between, among other items, salmon croquettes and, yes, chicken and waffles. I was given my choice of a thigh and leg, and two sides — for me, grits and fried green tomatoes. The latter were sliced thin and as sweet as they were sour.

Alcenia's is a real treat, not just for the tasty brunch but for the homey atmosphere and proprietor Chester-Tamayo's good company. She sat down with me for a lovely 45-minute chat about the challenges of small-business ownership, her mother Alcenia's great recipes, which she uses in her own cooking, and her beloved baby granddaughter — also Alcenia. This place feels like a family kitchen.

Chester-Tamayo points out Alcenia's motto: "Feeding the heart, the head, and the stomach!" And as she explains: "If I feed your heart and your head, your stomach will be okay."