My back's killing me. I've had a pinched nerve in my lower back for over two weeks now. I really don't know how it happened. I think someone called my name and I turned around funny. I'm sure that dancing at my stepdaughter's wedding only exacerbated the problem.

We knew the day was coming. We met the young man, they set the date, and we began our ever-growing neurosis about flying to California for the ceremony. The wedding itself was beautiful, but it was an endurance test to just get there. The airlines have stripped customer service to the marrow and just about everything surrounding the industry, from air fares to the sadists who populate the TSA, tests your tolerance and tries your patience. 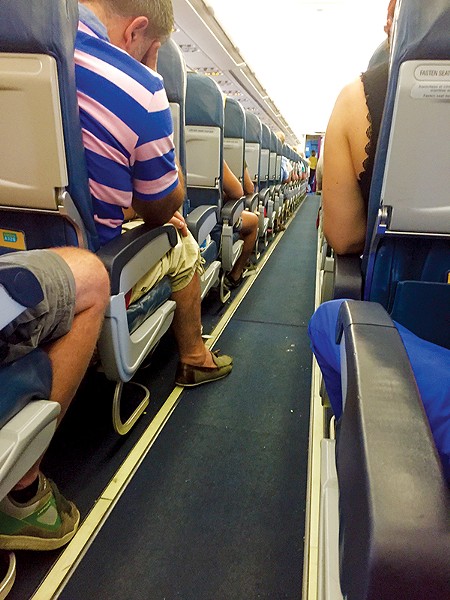 Once an adventure, today's air travel more closely resembles flying Trailways buses that were decommissioned in the '70s. In order to maximize shareholder profits, seats are smaller in both width and legroom and an overweight person might have to slide into the tiny bathroom sideways. And the seats don't tilt back anymore. Now I know how those prisoners who were tortured at Abu Ghraib felt.

For years after a particularly harassing and humiliating flight, we have tried to avoid air travel and drive whenever possible. But then we drove to Atlanta, and I took the wrong turn-off in Nashville and ended up driving around the city lost for an hour or so — and I lived there for nine years. So, Amtrak and Greyhound aside, if you have a long distance to travel, you're pretty much captive to the airlines and you will obey the rules or else.

And they keep changing the rules. One fool tries to light his sneakers on fire and for the rest of our lives we have to tiptoe through security in our stocking feet. This trip, we were allowed to keep our shoes on but had to stand in that scanner that exposes your ass to some letch monitoring a flat-screen. I thought I saw him pocketing a printout. A necklace I was wearing set off the metal detector, and I was told to step to one side and wait for a uniformed pencil-neck to come over and pat me down. Melody said I was supposed to put my wallet and phone in a container instead of shoving my whole jacket through the X-ray device with all the stuff in the pockets. I was merely trying to be efficient.

We had an early flight to San Francisco with a layover in Phoenix, and I was surprised to find the gate was packed. The boarding process is totally stupid except no one's bothered to tell them. Wouldn't it make more sense to fill the plane back-end first? Then no one would be stuck in the aisle waiting on those passengers attempting to cram an overstuffed valise into an undersized overhead compartment. We brought wedding attire, which meant we had to check two bags at $30 a pop, and we still had carry-ons. Naturally, I drew the middle seat, which meant I had to jockey for the armrest with a stranger for several hours while sitting in a seat more suited for an anorexic aficionado of Deep Vein Thrombosis.

A Columbia School of Law professor has called these airline practices "calculated misery." With only four airlines controlling 80 percent of air traffic, a wink and a nod translates into every flight slashing comforts to prod customers into paying extra for additional services, like legroom. We did get a small bag of pretzels and a coke, only not the full can. I asked Melody if she would call the stewardess over for a refill, but she told me that the proper term now was flight attendant. I said that, actually, they were air waitresses, to which Melody informed me that the acceptable term now was server. I implored, "Just please ask the soft-drink Nazi if I can have some more cola."

The American Eagle airplane is the Ford Pinto of the air in that it should be discontinued for commercial use. Melody had insisted that I stop singing "By the Time I Get to Phoenix" by the time we actually got there, and the Xanax was wearing off. The walk to our connecting gate was like the Bataan Death March with a pinched nerve thrown in for laughs. No zippy little trams or golf carts, just us trudging along with grim reserve and bruised knees from lack of legroom.

Arriving in California was like being discharged from the Army. When we reached the hotel, both of us were drained and ready to collapse only to find our room directly above the hotel's ballroom where a wedding disc jockey was spinning hip-hop music so loudly he may as well have been set up in the bathroom.

I might have copped an attitude had our wedding not been so beautiful. The bride looked so gorgeous that I had to shed a tear. I think I must have snorted a little bit too because my future in-laws were patting my back and comforting me. The band at the reception was so good, I got up and danced, despite myself. My new son-in-law's father is a minister, and we were told he was very reserved. But by night's end, Melody had the reverend up and dancing while the band sang, "We're up all night to get lucky."

When we returned exhausted to our room, another wedding DJ was blasting away in the ballroom below, and it was all about that bass. Our flights returning to Memphis were the same misery, only in reverse — and I got singled out by security again. We arrived exhausted and grouchy, collected our luggage, and walked an additional mile in the freezing cold to the long-term parking lot.

I wouldn't have missed it for the world.