Escape to the Natural State

It's late afternoon when we pull into Ponca, Arkansas (Pop. 9). We've been winding north along Highway 21 through the Ozark National Forest for an hour or so, trusting Siri, even when Siri seems untrustworthy. Finally, here it is, our destination, a wide spot on a narrow road along the Buffalo River, home to a canoe-and-cabin-rental operation and little else, it appears.

"But they're famous for their music here," I respond.

"What, you never heard of Ponca-rock?"

"Shut up," she explains.

It had been a long drive. 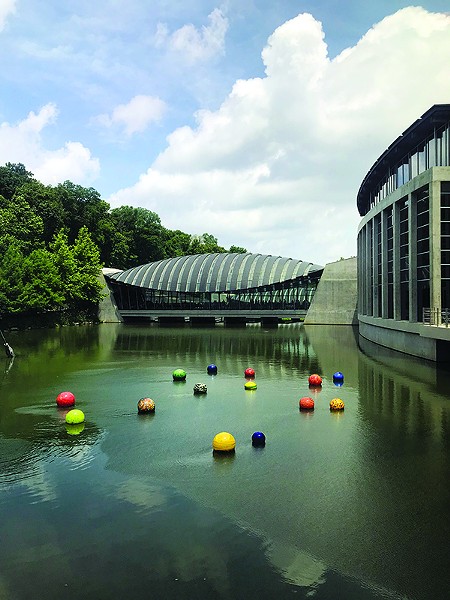 Last week we did an Arkansas getaway: two days canoeing the Buffalo, followed by a trip to Bentonville to see the Crystal Bridges Museum, then wrapping it up with a day and night in Eureka Springs. Since I still had to turn in a column this week when I got back, you're going to get a play-by-play of the trip. Fair warning.

After a night in a rustic cabin, we left Ponca and drove to the designated put-in spot, where we loaded our 17-foot rental canoe with a cooler and dry bags holding our tent, sleeping bags, air mattresses, and food, and headed downstream. If a canoe had gills, we'd have been loaded to them.

The water was a bit low, making for a few tricky riffles and the occasional skinny water bump-and-grind, but it was mostly smooth paddling — like gliding across the surface of an aquarium, with smallmouth, gar, suckers, sculpins, sunfish, and various turtles easily visible below. The bluffs were high, the sky was blue, birds were everywhere — and the day got warm, meaning lots of dips into the water to cool off. As evening fell, we pitched our tent on a gravel bar, built a little fire, and went to bed before the sun went down on the shortest night of the year.

Late in the night, we scared off a few curious deer who were huffing and puffing and inspecting the tent, but they weren't bears, which we counted as a victory. By noon the next day, we were back in the car and on our way to Bentonville, tired and happy and ready for a soft bed.

If you haven't been to the Crystal Bridges Museum of American Art, I enthusiastically recommend it, as much for the grounds and museum buildings — which are remarkable — as for the formidable collection. And it's free, unless you opt to tour certain temporary exhibits. It's funded with Walmart money, of course, which made our consciences twitch a bit, but like I said, it's free and a phenomenal resource and tourist draw for the area. Bentonville itself is a bit like Seaside, Florida, with lots of precious faux-traditional houses, tons of running and bike trails, plus a lovely, thriving town square straight out of a Norman Rockwell painting. Anyway, go. You won't be sorry.

The final leg of our Natural State Triathlon was Eureka Springs, home to the "Gumby Jesus" statue (google it) and a dinosaur museum that claims "immature dinosaurs" were on Noah's Ark. Of course. There are also lots of bars, hippie paraphernalia shops, souvenir joints, and New Age boutiques crammed onto vertical streets that resemble paved goat paths. Think Myrtle Beach with hills. We stayed at the "haunted" 1905 Basin Park Hotel, but opted not to buy one of the "ghost detectors" for sale in the lobby, because we don't scare easy.

I wandered off in the late afternoon to find a watering hole, finally settling on a balcony bar overlooking the main drag. I ordered a margarita and listened for 15 minutes, fascinated, as a couple from Kansas and a couple from Ontario at adjoining tables chatted about their dogs, which were waiting back in their RVs. It was the nicest, least ironic, least cynical conversation I've ever heard. Sadly, I had to push them off the balcony to their deaths.

The street below was filled with an endless stream of loud, rumbling Harleys, each occupied by an older couple with gray ponytails flying. Whether this was a standard weekend activity or there was a convention of the AARP chapter of Hell's Angels in town, I can't say. I also witnessed perhaps the bravest two men in Arkansas — one black, one white, each wearing gaudy gym shorts, walking down the street holding hands. Or maybe that's just how Eureka Springs swings. Who knows? I'm just a simple tourist.