Playhouse goes for nothing less than The Full Monty.

I've heard rumors and rumblings that Playhouse on the Square is planning a bold, controversial season for 2007-'08. If my sources can be trusted, there's a real chance Memphis' only resident professional troupe will perform an entire season's worth of plays and musicals with all of their clothes on! That's right, folks, you heard it here first: The rapidly expanding theatrical company, which most recently showcased MILF boobs in the Mid-South premiere of The Graduate and an all-you-care to-watch buffet of wet, soapy willies in the gay baseball play Take Me Out, will act on stage for a whole 365 days without the benefit of nipples, nads, or derrieres!

Actually, none of that's true. I just made it up. But it does seem as though the Playhouse family of theaters has been particularly raw over the past several seasons, offering up a skinful array of tasteful titillations and artistic nudes accompanied by steady doses of good old-fashioned burlesque. And now for the next few weeks, Playhouse continues in that naked tradition by treating audiences to The Full Monty, a heartfelt musical about real guys with real problems climaxing with the full exposure of a half-dozen swinging ding-a-lings representing every wrinkled facet of the ordinary average Joe. It shouldn't be a pretty sight, but thanks to the skillful, upbeat direction of Dave Landis and some exceptional lighting by Ken Friedhoff, it is.

Tony Award-winning playwright Terrence McNally's two-and-a-half hour musical adaptation of The Full Monty is no improvement over the original 90-minute film, which was a surprise hit in 1997. If anything, the stereotypical characters have become even more cartoonish and the storyline more brazenly motivational. Both the film's brevity and its nuanced character development have been sacrificed in order to make room for a dozen witty, well-crafted show tunes that are so self-consciously blue-collar you'd swear Larry the Cable Guy was called in as a script consultant. Most troubling, McNally, who has distinguished himself as an honest, myth-shattering chronicler of the modern gay experience, has written a homosexual subplot into The Full Monty that's so clichéd he might as well have specified that both characters wear a dress. Let's face it: When two men bond over their mothers and their mutual love of The Sound of Music at their first dance rehearsal, you don't need Nostradamus to tell you where things are going. And for all of this silliness, The Full Monty is still a winner and a reasonably successful attempt to explore the tropes of masculinity using hackneyed plot devices stolen from a vast canon of chick flicks.

Though the action of the story has been moved from working-class Wales to Buffalo, The Full Monty's plot has been kept intact: The steel mill closes, and the menfolk are emasculated, forced to choose between the domestic drudgery of a housewife or working at Wal-Mart. At the center of the story is Jerry Lukowski, a poor slob with a criminal record, a pile of debt, and a son he's going to lose if he can't come up with his child-support payments. 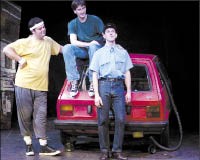 Inspired by a troupe of male strippers and certain he can make 50-G in one night, Jerry assembles Hot Metal, a troupe of exotic dancers composed of old guys, fat guys, skinny guys, geeks, and dudes. Think Rocky but with G-strings instead of boxing trunks, and you've pretty much got the picture.

Aaron Lamb is an energetic charmer as Jerry, although he has trouble establishing believable relationships with his ex-wife Pam (played by Claire Hayner) and his son Nathan (played by William Thornton-Leonard). It's impossible to imagine what these characters would ever talk about if they didn't have a script to go by, and it's difficult to imagine that they could have ever been a family, dysfunctional or otherwise. But that's okay because this feel-good musical is propped up by an extraordinary supporting cast, including Ostrander winners George Dudley, David Foster, and Irene Crist at her cranky best. It also showcases the soulful talent of Five Guys Named Moe vet Rod O'Neal and Dan Zakarija, who nearly stops the show by singing a bittersweet love song to his sagging gut.

Playhouse has been on a roll lately with innovative musicals like Urinetown and edgy thrillers like Frozen. All of these shows have succeeded thanks to the actors' fearless performances. The Full Monty follows in that fine tradition. It's not perfect, but it's balls-out.