Fantastic Beasts: The Crimes Of Grindelwald

Prequel-itis has struck down franchises of all kinds. It seems so innocent and wondrous at first. Here are characters we love, having great adventures in a fantastic — dare I say, magical — universe. But once the main story has come to a satisfying conclusion, we still want to live in our imaginary friends' world. So why not take a loose end from one of the many threads left lying around from the epic tapestry? Our creators spun a good story before, why can't they do it again? After all, the hard work of world building is already done. We know the rules, we just need a new cast of characters for another fun romp. So why not go back in time to see how the world was made in the first place? We can meet some of our friends when they were young, and see things only spoken of before. 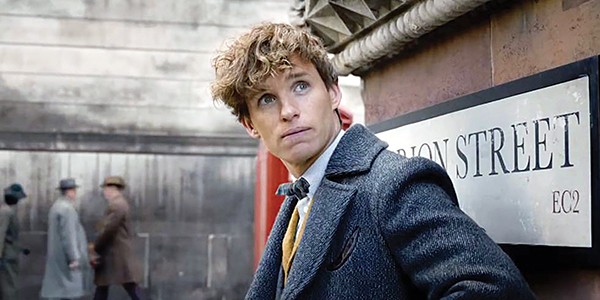 The rub is the "new cast of characters" bit. Especially for the Harry Potter franchise, which has now been rebranded the Wizarding World, so you can know which part of the Universal theme park you need to go to. J. K. Rowling's extraordinarily successful series of young adult, urban fantasy novels formed as rich a tapestry as you could possibly ask for. But what has become obvious with the second installment in the Wizarding World prequel series, Fantastic Beasts: The Crimes of Grindelwald, is how much the success of the eight Warner Bros. films depended on the core cast of Daniel Radcliffe as Harry, Emma Watson as Hermione, and Rupert Grint as Ron.

(Why "Wizarding World," by the way? Why not just "Wizard World" or "Magical World"?)

On paper, the cast of The Crimes of Grindelwald looks great. There's 2014 Best Actor Oscar winner Eddie Redmayne as Newt Scamander, xeno-maji-zoologist and author of the seminal magic tome Fantastic Beasts and Where to Find Them. Katherine Waterston, who was so compelling as Shasta in Paul Thomas Anderson's Inherent Vice, is Tina Goldstein, a crack Auror, or secret agent, for the American branch of the Ministry of Magic and Newt's star-crossed, almost-lover. Zoë Kravitz, showbiz royalty who acquitted herself so well in Mad Max: Fury Road, as the oh-so-magically named Leta Lestrange, a lost soul from Newt's past who is currently engaged to his estranged brother Theseus (Callum Turner). The always nimble Jude Law as young Albus Dumbledore, the powerful wizard who has acted as puppet master for generations of young wizards fighting evil. And of course, Johnny Depp, the epitome of the loved-and-hated, 21st-century movie superstar, playing against type as the evil Grindelwald, who is basically Voldemort, except he has a nose. How can you go wrong with a powerhouse cast like this?

The first way The Crimes of Grindelwald goes wrong is by spinning its wheels for about an hour. The opening sequence, where Grindelwald, whom the Ministry of Magic treats like a sorcerous Hannibal Lecter, escapes from captivity while being extradited from the U.S. to England via a black carriage drawn by winged demon horses, is spectacular. Then, we go to Newt appealing an international travel ban imposed by the Ministry after the events of the last movie, where he almost leveled half of New York, and it's just as dull as it sounds. We're talking Phantom Menace dull.

For most of Crimes, Rowling, who wrote the screenplay, and director David Yates, who brought the original Potter film octalogy to its conclusion, chase one subplot after another and end up nowhere. The ostensible goal that Dumbledore sends Newt off on a secret mission to accomplish is to keep Credence (Ezra Miller), the anti-Harry Potter who only looked like he died in the last movie, out of the hands of Grindelwald. But we are quickly assaulted by the presence of Jacob (Dan Fogler) and Queenie (Alison Sudol), the muggle/magical comic relief couple who grate on the nerves even more than last time. Then the ever expanding yet under developed cast meander through Magical Paris until they stumble onto a Trumpian rally of fascist wizards led by Grindelwald. It may be heresy to the fans who cried foul when he was cast, but Depp's big scene is the best thing about this movie.

Like the Star Wars prequels, the design and execution of the CGI effects are top notch, but everything else seems like padding until we get to the two or three scenes designed to advance the bigger plot, which the writer actually cares about. Prequel-itis strikes again.