City leaders say they prefer a "toned down" response.

Military fighting gear has made its way from the Department of Defense to the Memphis Police Department (MPD) over the past decade. But Mayor A C Wharton said the city has only "what we need" with access to more gear if a situation arises.

When officers from the Ferguson Police Department in Missouri clashed with protesters there earlier this month, the nation got a good look at some of the gear that has flowed from the military to local police agencies over the past decade. Police in Ferguson drove armored vehicles, wore body armor, and pointed high-powered rifles at crowds of protestors. The sights made federal leaders uncomfortable, and they are promising action.

U.S. Rep. Steve Cohen, of Memphis, demanded a House hearing on the militarization of police forces two weeks ago. U.S. Sen. Claire McCaskill, of Missouri, promised a similar Senate hearing next month. Obama administration officials said they will review the federal military surplus program and training programs that go with them.

Since 2004, MPD has received five automatic rifles, two boats, and two armored personnel carriers from the Defense Department's 1033 surplus program, according to the Tennessee Department of General Services. 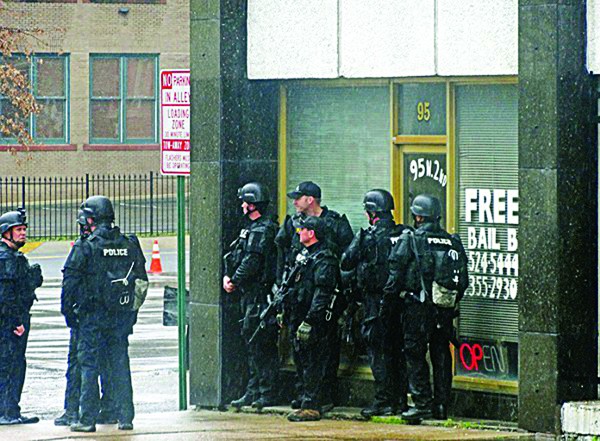 MPD public information officer Sgt. Karen Rudolph said the M14 rifles are kept in storage and have never been used.

The two bridge erection boats, she said, are "basic, flat-bottom, metal boats" that would be used to patrol the Mississippi River, the Port of Memphis, or to rescue passengers from a river boat. But the boats sit in surplus storage, she said.

The MPD's two armored personnel carriers, which look basically like Army tanks, were built in 1979, Rudolph said, but the department has never used them since they arrived here in 2004. MPD has them, she said, if the need arose to carry officers into a dangerous zone with an active shooter. Also, the carriers' tracks can travel over terrain too rough for trucks or ATVs.

Wharton said he oversaw the acquisition of all of the surplus military gear here when he served as the district chair of the Tennessee Homeland Security Council. Though he said he "was a bit concerned about it" at the time, he didn't see "what I would call excesses."

"Perhaps [using military gear] ratchets things up, things that wouldn't reach such a fever pitch if it weren't for the introduction of that kind of foreboding, frightening equipment that makes folks want to take you on, quite frankly," Wharton said.

He preferred to keep police responses "toned down," he said, but noted that the city could get more heavy response gear from neighboring communities if it was needed.

But the show of force displayed last year during the Ku Klux Klan's protest at the Shelby County Courthouse was anything but toned down. It was "overwhelming," according to an on-the-scene report from Memphis Flyer reporter John Branston.

Rudolph said she would not compare MPD officers to those in Fergurson but defended last year's response.

"However, as seen during the KKK rally, the Memphis Police Department is adequately equipped with the personnel, equipment, and training needed to address any incident that may occur within our city," she said. "Our primary goal is to keep our citizens safe."