Fidgeting Through the Spin Zone

The herky-jerky pace of activity of our current news environment has blessed me in an unexpected way: I have given up on writing about it, at least for now. Each time I've tried, I've gotten as far as jotting notes and organizing a loose outline, only to be interrupted by a notification from CNN or The Washington Post signaling that the rest of the world has moved on to some fresh new confusion. An evergreen piece would be only eight words long: "Please slow down while I process this information."

At first, it was frustrating, but now I feel liberated. I have more time to listen and absorb. I'm free to devote my creative energy to other topics, such as a cultural phenomenon that has piqued my curiosity. So, at the risk of going full Andy Rooney, can someone explain to me how fidgeting became cool all of a sudden?

Fidget spinners — and their more complicated cousin, the fidget cube — appear to be this year's Pokémon Go. As with most trends, the movement started with kids and quickly ballooned to become Fun for Everyone. Now, we're at the Thinkpiece Phase, during which the trend is over analyzed as a sure sign of the times and indicator of society's progress or decay, depending on whom you ask. Soon, someone will walk into oncoming traffic or commit some other reckless behavior while participating in the trend. TV news will follow with dramatic warnings that This Hot New Trend Might Be Deadly, and the life cycle will be complete.

For those unfamiliar with the phenomenon, the spinner is a gadget that operates like a handheld top or pinwheel. Each has a bearing at the center and three rounded "blades." While holding the bearing, the user flicks one of the blades and the gizmo starts spinning. And spinning. That's it.

"Oh, those things," you might be thinking. Yep. Those things come in every color. Some glow in the dark. Some have LED lights. A sleek carrying case can keep your spinner safe and dust-free. Some kind of heavily branded luxury spinner will hit the market any day now, so keep an eye on Kendall Jenner's Instagram feed for that. Or a $1,000 limited-edition model will come preloaded with a U2 album or something. 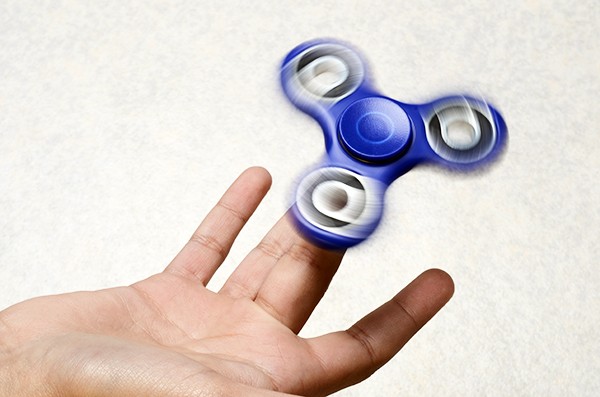 Are the spinners a salve for sensory issues and attention disorders? Are they the heir to the pointless toy trends of my childhood, say, slap bracelets and Pogs, or their more complicated predecessor, the Rubik's Cube? Or has society already devolved so much in the past 120 or so days, as one New Yorker writer implies, that "spinning one's wheels has been recast as a diverting recreation and embraced by a mass audience?"

Who knows! All I can tell you is that fidget spinners are So. Hot. Right. Now. At a gas station near my home, they're prominently displayed in front of the register next to the lighters, lottery tickets, and Lightning cables. In my Facebook feed, they're confiscated and adulated in equal measure by my teacher and parent friends. In pedicure chairs and doctors' offices, at tables at Gus's, in line for the restroom at FedExForum, people of all ages are letting their fidget flags fly.

On behalf of everyone who has received a warning side-eye in church or been reprimanded in class for an irrepressible urge to squirm, I say: It's about time this behavior was normalized. Inability to sit still has long been considered a deficiency or a distraction. Yet everybody fidgets, and restlessness is not a 21st-century ailment. In fact, one theory suggests that our brains cannot devote 100 percent of our working memory to a single task because our prehistoric ancestors needed to focus on hunting and gathering while also remaining alert to vicious predators in their surroundings.

When phones were tethered to walls, we coiled the cords around our fingers during long calls. When they became cordless, we paced. Now, we compulsively check our smartphones out of boredom. Long before they were enhanced with addictive chemicals, cigarettes were the original fidget devices. That's why smokers who attempt to quit are advised to find ways to keep their hands busy. At my office, preoccupying "desk toys" — Slinkies, stress balls, and even tiny Zen gardens — adorn almost every workspace. I suppose that makes us doodlers, pen clickers, toe tappers, knuckle poppers, and tabletop drummers fidget hipsters. It's nice to be on the vanguard for once.

Jen Clarke is an unabashed Memphian and a digital marketing strategist.