Whatever Fifty Shades Darker actually is (and let us not look too deeply, my friends, into that fickle mirror of the self), it is definitely the second of its kind. There was a first, called Fifty Shades of Grey, and there will be a third, called Fifty Shades Freed. Before the Fifty Shades trilogy was on-screen, it was in-book, and before it was in-book, it was online. The story of Anastasia Steele and Christian Grey, two dreadfully entwined lovers from the black heart of Seattle, originated as Twilight fanfiction. It was penned by an author named E.L. James, who is now very, very rich. Steele's and Grey's is a story about BDSM and helicopters and what it's like to be a working girl with a billionaire boyfriend. 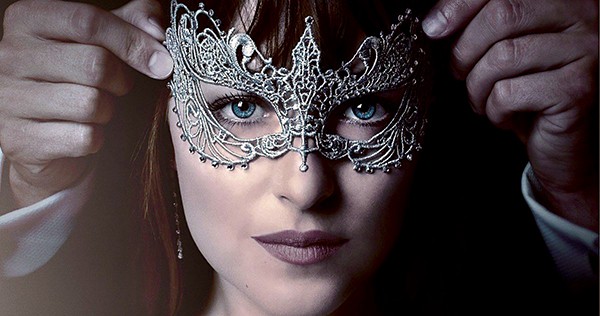 At the beginning of this franchise middle child, we meet Anastasia (Dakota Johnson) on the first day of her new job at an independent publishing company. She is no longer dating businessman Christian Grey (Jamie Dornan) because at the end of the last movie, Christian revealed to Ana his penchant for x-treme sadism, and she was like no way, my man, not happening to this English major. But now Grey wants Ana back. He sends her white roses to congratulate her on her job and shows up uninvited at her friend's photography show. She tries to resist his attentions, but because her character is never allowed to speak above the decibel level of a mournful library-whisperer, she fails. So they go out to dinner, and then (kind of a spoiler?) they are fucking again. Only this time it isn't gonna be about submission. It is going to be a real relationship, on her terms.

Uhhhhggg. Reader, come here. Closer. Closer. Good. Mama is tired. Tired. I want to summarize the rest of this plot for you, but I just can't. These are the few moments in the film that one might mistake for plot points:

• Ana's boss at her new job looms weird and threateningly;

• Someone fires a gun (at this point in the movie, a dude behind me in the theater said, "I didn't pay to see this type of shit.");

But, as with the first Fifty Shades, these narrative points really only serve to punctuate the actual purpose of the whole undertaking, and that purpose is "nice stuff parade." There is so much nice stuff in this movie! There's a super nice masquerade ball to which Anastasia Steele wears a really sexy gray dress and mask. The masquerade ball is thrown in honor of a charity called Coping Together (definitely 2017's leading V-Day sentiment), and "Coping Together" is printed on a drum kit. That's nice! And what else? There's a sailboat, a home gym that includes a pommel horse, lots of flowers, bottled water, and black SUVs. There are lots of scary-but-hot people! Rita Ora is here, presumably playing a character in the movie, and she has blonde hair. There's also new Taylor Swift and ZAYN collaboration that I want to hate but is actually stuck in my head. Nice!

The best part of the whole thing comes in one of the numerous, tedious partial-sex scenes, when Christian Grey is beginning to make sweet love to the dulcet, overproduced tones of some song, and it's doing that subtle techno thing. And then the music stops. And then right when the beat drops, he thrusts.

Please, y'all. Don't go see Fifty Shades Darker. Instead stay home with your partner/a stranger from the internet and try to perfect thrusting to the drop of a club anthem.