I'm on record as saying the gangster movie is a played-out genre, except I think I phrased it more like "If I have to watch another movie about well-dressed gangsters in the Northeast, I'm gonna puke."

I know gangster movies have been a staple since at least 1931, when Jimmy Cagney strutted around in The Public Enemy, and I know that, at their best, they're a commentary on the American dream, capitalism, the immigrant experience, etc. But lately, it seems like they're a shortcut to gravitas for a bunch of writers and directors who are obsessed with a vision of masculinity that, in 2015, seems increasingly toxic. I've gone beyond the point where I think it's fun to watch jowly men scowl at each other across well-appointed tables. We get it. You liked The Godfather. Let's move on.

It would be too much to say that Black Mass dispelled me of that notion, but director Scott Cooper's film is good enough to suggest that maybe there's life left in the old gangster movie carcass yet. To be fair, James "Whitey" Bulger (Johnny Depp) and his totally legitimate business associates in the Winter Hill Gang were not, by any stretch of the imagination, well dressed. 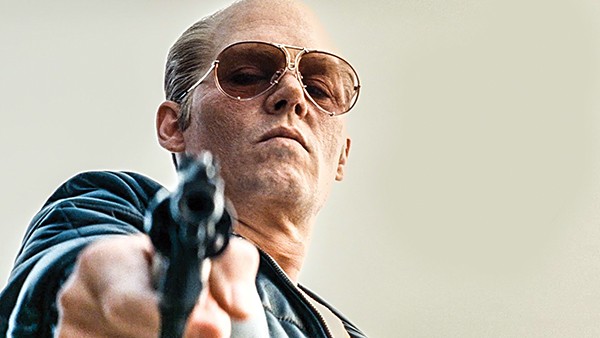 Black Mass is told in a series of flashbacks, as members of Bulger's gang, beginning with Kevin Weeks (Jesse Plemons) are deposed by the FBI. In their memories, Bulger was just as contradictory a figure as Cagney in The Public Enemy. He was a ruthless, violent thug, but he also was kind to children, let his mother win at gin rummy, and was beloved in the South Boston neighborhood where he grew up. By the time we first meet him in 1975, he has already served nine years years in San Quentin and Alcatraz, and was a respected boss in Boston's Irish mob.

Instead of getting mobbed up, Bulger's childhood friend John Connolly (Joel Edgerton) joined the FBI. He reaches out to Bulger's brother Billy (Benedict Cumberbatch), a state senator and one of the most powerful men in Boston, to make contact with Bulger and persuade him to become an informant. Amazingly, Bulger agrees, but as the story progresses through the 1980s, it soon becomes apparent that Bulger is just manipulating Connolly to his own ends and using the FBI as his personal intelligence agency as he consolidates power.

After spending most of the last decade playing over-the-top characters like Captain Jack Sparrow in the Pirates of the Caribbean series, and whatever nutso man-child character Tim Burton was peddling that year, the buzz was that Black Mass represented Depp's return to serious acting. He is easily the best thing about the movie. His Bulger is introduced as a demonic presence in silhouette, and he seems to remain partially in shadow the entire film, even in scenes set in Miami's tropical sunlight. Cinematographer Masanobu Takayanagi never misses a shot to make Depp's partially shaved noggin look like a death's head skull perched atop his ubiquitous black leather jacket. Edgerton, who is excellent at playing men blind to their own flaws, follows Depp around like a puppy as he is drawn deeper into the world of criminals he's supposed to be fighting. Also excellent are Kevin Bacon as a Connolly's FBI boss, and Cumberbatch, whose Southie accent is so perfect you'd think he grew up there.

Unfortunately, the screenplay is not up to the level of the performances and cinematography. Part of the problem is that the real story itself is kind of flat, with no peaks and valleys, just a slow slide into degradation for everyone involved. No matter how well-rendered Bulger is, he's still a singularly loathsome individual who may or may not have been pushed into full blown psychosis during more than 50 LSD experiments he volunteered for while in Alcatraz. Watching him run roughshod over the corrupt city government and weak-willed FBI agents is like reading about World War II's Eastern front—you don't want to root for either Hitler or Stalin. It makes for a bleak view of humanity dressed up in tacky 70s clothes and some of the worst hairstyles ever committed to film. But if you're a fan of gangster movies and/or Depp, Black Mass is the best dose you're going to get this year.