Robert Zemeckis and Joseph Gordon-Levitt tread a fine line in The Walk.

2015 is a big year for Robert Zemeckis. It's the 30th anniversary of his all-time classic Back to the Future. On October 21st, the film's fans will gather for a marathon viewing of the entire trilogy on the very day Marty McFly and Doc Brown traveled to in Back to the Future Part II.

Yes, we're as far in time from 1985 as Marty and Doc were from the Enchantment Under the Sea dance. The Zemeckis of 1985 couldn't have known he was making an enduring masterpiece, but he would no doubt have been pleased to know that when 2015 rolled around, he would have a new movie he wrote, directed, and produced in theaters, and it would be a good one.

The story behind The Walk has been told onscreen before, in James Marsh's 2008 documentary Man on Wire. In 1974, Philippe Petit, a French mime, street performer, and high-wire obsessive, read an article about the 110-story twin towers of the World Trade Center that were about to be completed in Manhattan. The Parisian became obsessed with the idea of performing a tightrope walk between the towers, which would not only be the highest tightrope walk in history, but, as they were the tallest buildings in the world, the highest tightrope walk possible. Neither the fact that the towers were on another continent, nor that the whole enterprise was both absurdly illegal and almost certainly suicidal, could deter Petit from his dream. Such was his confidence that he was the only person who wasn't surprised when he pulled it off. 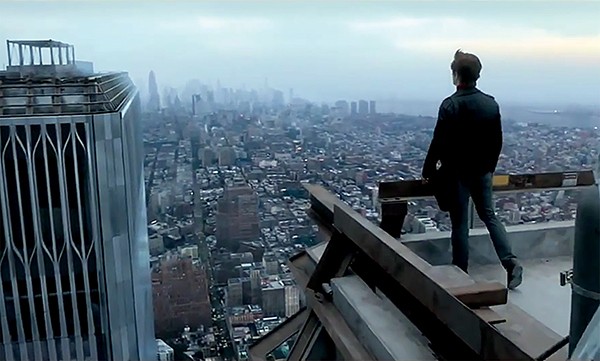 In Zemeckis' version of the story, Joseph Gordon-Levitt has the unenviable task of playing Petit. I say "unenviable" because playing the larger-than-life Frenchman means being saddled with an out-a-rage-ous accent for The Walk's two-hour running time. Even worse, Zemeckis, like the documentary director Marsh, chose to allow Petit to narrate. In Marsh's case, that means letting the interviewee tell his own story from the safety of the ground. But the fictionalized Petit narrates from a precarious perch atop the torch of the Statue of Liberty.

If this sounds eye-rollingly cheesy to you, you're right. It is cheesy. And yet, Zemeckis somehow makes it work. If Petit was a fictional character, he would have to be toned down to be believable. But he's real, and Gordon-Levitt plays him fairly straight. Post-Forrest Gump Zemeckis has often tumbled over into the too-precious abyss, but Petit's natural outlandishness has the perverse effect of grounding the director.

The visuals, on the other hand, are far from grounded. Zemeckis has made a career of being perched on the cutting edge of film technology, from digitally compositing Forrest Gump into real historical footage to the early CGI animation of The Polar Express. In The Walk, he makes one of the few convincing arguments for 3-D I've seen. It's usually just a ticket-price-inflating gimmick—does anyone really think the sweeping vistas of Lawrence of Arabia would be better in 3-D? But the story of the crazy guy who walked a tightrope 1,377 feet above Manhattan is absolutely the right subject matter for stereoscopic photography. Zemeckis has great fun manipulating the viewer's depth perception, especially once Petit steps out onto the highest of wires. Combined with the flawless, photorealistic CGI, he makes The Walk a completely immersive experience. Since he's the narrator, you know Petit is going to make it across unharmed, but it's still a sphincter-clinching journey. If you're prone to vertigo, you should sit this one out. But for the rest of us, The Walk is a movie best experienced from the edge of a theater seat.