How an unknown nanny became an art superstar overnight.

Few took notice in 2009 when 83-year-old Vivian Maier died in Chicago. She was known in her neighborhood as a batty lady who sat on a park bench and watched the world go by. But she would have been shocked, or least darkly amused, to know that events were already in motion that would make her the posthumous toast of the art world.

A year earlier, photography collector and local historian John Maloof, who was looking for images of Chicago landmarks, had bought some boxes of undeveloped film and negatives at a storage-space auction. When he printed a few samples from the film, he was astounded at what he saw: incredible images of ordinary people on the street. But when he searched the internet for the name of the woman he found on some envelopes with the hoard of photos, he found nothing. It was only after he found her death notice a year later that he had his first lead as to the identity of this mysterious artist.

The documentary Finding Vivian Maier expertly traces Maloof's investigation into the photographer whose work is being compared to the father of photojournalism, Henri Cartier-Bresson. And like Van Gogh's missing ear, her backstory, or rather, lack of backstory, adds to the experience of her art. Van Gogh made wildly expressive paintings, so the fact that his passion (or mental illness) led him to cut off his own ear adds to the works' mystique. Anonymity made Maier, a street photographer who teased beauty from random people who mostly didn't know they were being photographed, a disembodied mind, absorbing and reporting from reality. But the similarities don't stop there. Van Gogh sold one painting during his life and only became world famous after his demise. Maier left behind more than 100,000 photographs but never showed them to anyone. The very act of taking the photographs, "the decisive moment, " in Cartier-Bresson's words, was enough for her. 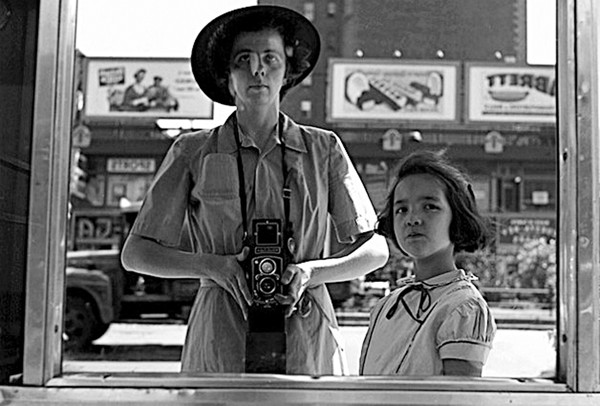 Maloof uncovers many details about Maier's life. She worked as a nanny and housekeeper for well-to-do families on the East Coast and Chicago for decades. She briefly worked for talk show host Phil Donahue in the 1970s, and he remembers her in the film as smart and "not crazy." But as the investigation deepens and the stories pile up, it becomes clear that she was more than just eccentric. Despite her nomadic lifestyle, she was a compulsive hoarder, which is why her work still existed to be discovered. Even though she was a loner, she sought out company from people in the slums of mid-century Chicago to the cottages of the Hamptons. Those who knew her agreed that she had a dark side, hinting that she could be incredibly mean and borderline abusive to the kids in her care.

But the detective story in Finding Vivian Maier wouldn't be compelling without the hundreds of incredible images that flash across the screen. Maier's work is at once compassionate and cynical, bringing out the good in the people whom the world ignored and subtly pointing out the injustices and excesses of America at the height of its golden age. In a way, Maier was ahead of her time. She was a devotee of the selfie. Had she been born 50 years later, she would have expertly wielded her iPhone and amassed a huge following on Flickr and Instagram. The trolls of the web would have only confirmed her worst suspicions about humanity. But because of the accident of birth and a chance discovery, she is instead a legend. It is an irony she might have appreciated.