Think of it as the butterfly effect writ small. In the predawn hours of October 6, 2006, downtown Memphis was in chaos as First United Methodist Church blazed, an act of God that stained red the night sky. Located at the corner of Second Street and Poplar Avenue, the church burned from the basement up and spewed ash and dust and fiery embers into the air as it was consumed.

It was a windy morning. One ember traveled exactly three blocks south and one block west to land on top of the Court Annex Building adjacent to Court Square. "It didn't go four blocks and 10 feet, which would've overshot the building," C. Yorke Lawson says. "Not only that, but the ember had to take a curve, a dogleg, around the 100 North Main Building. It was kind of a great Frisbee shot."

It wasn't the only ember to traverse the Memphis skyline, and the resulting blaze at the Court Annex Building wasn't the only secondary fire downtown. But the Court Annex fire was special for a couple of reasons. First, the century-plus-old building was a key component of the Court Square Center redevelopment project, along with the neighboring Lowenstein Building and Lincoln American Tower — a sizable project with an investment that numbered in the tens of millions of dollars. The development was the long-gestating baby of CGI & Partners and its three principals: Lawson, John Basek, and William Chandler.

Second, the Court Annex fire completely destroyed the building. "The building was already under construction, all of the windows were out, and it was completely empty of walls or any other thing that might slow a fire down," Chandler recalls. "It was a 100 percent wood building, and the wood had been drying out for 100 years. Essentially, once the fire started, it burned the whole building in an hour."

The Lowenstein Building had a fate different from the Court Annex. "Thanks to the fire department, Lowenstein was saved," Basek says. It did suffer significant damage, including an 18,000-square-foot basement that was seven feet deep in water.

The Lincoln American Tower, the third building in the redevelopment, fared better. "All of the windows on the east side were wood varnished windows, and those were on fire," Lawson says. "People were worried about the Lincoln American Tower burning down, but it is not going to burn down. It's a steel frame encased in a concrete building."

The greatest loss for CGI & Partners that morning was the Court Annex Building. But as with other problems that had come up during the redevelopment, it was met head-on and overcome. A new building — called Court Annex 2 for now — is being designed and is scheduled to break ground this summer.

Asked if there was a silver lining to the fire, Chandler replies, with a dry wit, "Well, we learned about insurance."

After some consideration, he adds, "The only silver lining is that it gives us the interesting challenge to design and build a new building. The Court Annex was going to be hard to do — it had a lot of structural challenges — but it was going to be beautiful."

Basek places the downtown fire in his own perspective: "I generally put it in three steps. One: Nobody was hurt; two: great fire department; three: the outcome involves time and money, and we're developers. In theory, we can work with those two items and solve what was already a difficult project and take advantage of anything that allows us to do a bit more with a hole than we did with an existing building. It's a challenge, and this is business."

Lawson says, "A lot of people come up to you and say, 'Well, you had insurance, so you're taken care of, and it may even come out in your favor.'"

The October 6th fire was but one milepost — albeit a spectacular one — in the eventual redevelopment of Lincoln American Tower, Lowenstein Building, and Court Annex.

The Lowenstein is the oldest of the three buildings — "It's probably the biggest, oldest building in Memphis," Chandler says. Built in 1885, it housed the B. Lowenstein and Company department store for the next several decades (Court Annex was built to provide additional storage for the Lowenstein store) before the retailer relocated to Brinkley Plaza. The cast-iron building's other major tenant was the Rhodes-Jennings Furniture Company, which left the building vacant when they departed in 1980.

"If you work on something long enough, eventually you become the expert," Chandler says. "For many years, I had the only keys [to the Lowenstein]. I was taking people through, and I was trying to negotiate with the city.

"The city wanted an outcome. They didn't want to transfer the building to a developer who didn't have a plan."

Chandler met Lawson through a mutual friend. Lawson and Basek were developers in Prague, specializing in the restoration of historic buildings. Lawson came to Memphis in April 2001 and Chandler asked him to take a look at the Lowenstein and Court Annex buildings, which were owned by the city, and the Lincoln American Tower, which was privately owned at the time.

Lawson was hooked, and he and Basek began the arduous task of development. Basek says, "It took from November 2001 — through a tax sale, a Request for Proposal process, and the negotiation of a development agreement — until February 2003, when the City Council approved a binding development agreement for Court Annex and the Lowenstein Building." 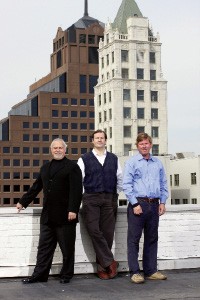 The Lincoln American Tower, considered crucial to the development's success, was also acquired, and the initial architecture and engineering planning for the three buildings, to be collectively called Court Square Center, was begun. Court Square Center had initial design work by CMC architects from Prague, and the supervising architect is Chooch Pickard of the Memphis-based CM Design. Another local company, Montgomery Martin, is spearheading construction.

Financial planning was even more complicated. Basek says, "The financial architecture for this project turned out to be more complicated than the architecture architecture of this development." Along with Telesis Corporation, a Washington, D.C.-based company that specializes in revitalization projects, CGI & Partners used a new federal financing technique called New Market Tax Credits (NMTC). The program, enacted during the Clinton administration, allows for the leveraging and inclusion of large amounts of equity.

Of NMTC, Basek says, "As with any new program, it takes awhile for people to learn how to use it. ... It took from the beginning of 2004 until the middle of 2006 to put the financing together. That included working with architects and contractors doing pre-construction design."

Lawson says investment came from three camps: friends and family; European investors; and local investors. Basek explains, "For the Europeans in particular, the idea that you could put together what is now nearly a $60 million project utilizing only about $3 million in private equity was pretty exciting."

Also crucial to the project's success was Memphis city government. "We have received a tremendous amount of support from the city of Memphis," Basek says. "From Mayor Willie Herenton on down, there was interest and encouragement. ... Whenever we had some problems, the City Council, [Memphis chief financial officer] Robert Lipscomb, and the mayor were all extremely helpful."

Government programs "make it possible," Basek says. "If you're willing to study, it is possible to do these things. These are projects that otherwise could not be done."

With so much hard work completed, it's easier to laugh about the tougher aspects of the job. "There was a reason why these buildings were abandoned and unused for 25 years, and we learned it," Basek says. "It wasn't that anyone didn't think it was cool to rehab those buildings, but it was extremely difficult. It's three completely different structures, three completely different approaches, and we were trying to do it in one phase, at one time."

Having moved mountains of paper — dollars, permits, applications, legal filings, architecture plans, schematics, and on and on — over the course of years, Court Square Center was finally ready to move dirt. "The official start of this project was August 2006," Basek says. "But the story, of course, doesn't end there. Six weeks later there was the catastrophic fire. One-third of the project was destroyed in an hour."

Despite the setbacks, Lincoln American Tower is ready to open on April 1st, only about four months behind the original schedule.

The building will include 31 apartments with premium office and retail space. On the ground floor: New York-based Ceriello Italian food market. Three floors of office space top that; the Plough Foundation, which is relocating from its East Memphis address, has spoken for the second floor. Local architecture firm Looney Ricks Kiss is designing their space.

With large, operable windows letting in light, the apartments take advantage of the natural beauty of the surroundings and the architectural features of the original construction.

The lower floors, in particular, have a sense of the greenery of Court Square Park coming right into the living room. These two-bedroom, two-bath units average about 1,200 square feet and will cost from $1,300 to $1,500 per month.

As the tower reaches skyward, the apartments take a dramatic turn, becoming two-story townhouse-style units. Residents can claim floors 16 and 17; 18 and 19; or 20 and 21. Two-floor units have secured, direct elevator access. The National Ornamental Metal Museum is refurbishing many of the building's fixtures that have been mistreated by time.

The Lowenstein Building is scheduled for opening by the end of 2008. It will feature 28 apartment units on four floors over a ground-floor retail tenant yet to be determined.

Court Annex 2 is scheduled to open a few months later and will bring another 16 apartments to the mix, with a ground-floor retail space and four more floors of apartments. It's being designed by Looney Ricks Kiss in keeping with the original building's architecture.

With the University of Memphis Law School relocating to the Front Street Post Office in August 2009, 500 students and 150 staff and professors will be within a block of Court Square Center every day.

Chandler says, "It's an important corner, it's a historical block of the city, and to put it back together as it was is a great accomplishment. Had we not done it, Lowenstein and Court Annex may have been demolished and Lincoln American may have stood vacant. It's going to trigger more development at this end of downtown."

With redevelopment nearing completion, Chandler reflects on what Court Square Center means to him: "I used to say to people, 'It's a lifetime project,' meaning, if you never do anything else in your life, you've saved this thing from demolition. You've put it back to last another 100 years.

"But on the other hand, it is not a retirement project. People will love these buildings after I'm dead. Are we going to make money? We hope so. Are we retiring on this? Not at all."

Chandler continues: "It's a lifetime accomplishment to know that you've managed to win. You lose so many preservation battles. This was a huge one, and we managed to win it. There were many days, even many years where we didn't know if we were going to get there or not."

Basek says, "If you devote the kind of time and energy that we have to this project over the years, frankly, it's not only about the money. We do expect to, in the long run, do okay. But it's really not about that, because we're building something.

"It was very hard and it was a challenge, but you are in effect giving something back to the community. For me, that's pretty important."