The Church Health Center (CHC) won't be moving into the Crosstown Concourse building until 2017, but it's already focusing on improving it's future North Midtown neighborhood.

Operation Crosstown, the CHC's volunteer-driven effort to make Crosstown "healthier, safer, and more livable" has just released its 2015 lineup of neighborhood improvement projects with a focus on fitness and art.

Last September, CHC hosted an idea lab for Operation Crosstown, and community members were invited to submit ideas for how to improve the neighborhood. In a test run for the organization, Operation Crosstown hosted a trash-can painting event after the idea lab. Afterward, volunteers installed them along Cleveland. 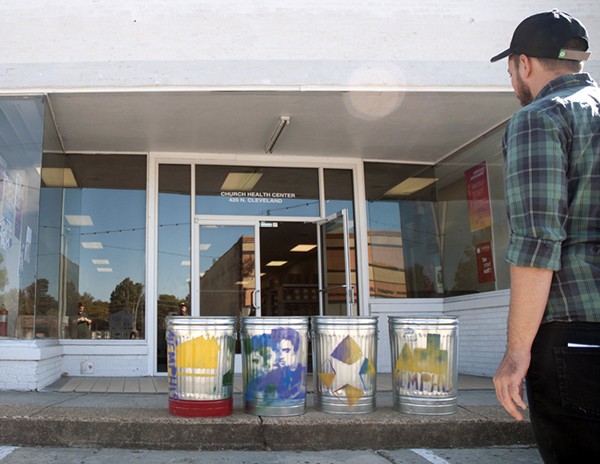 On Giving Tuesday in December, it launched a crowd-sourced fund-raising campaign for Operation Crosstown and netted its goal of $10,000. Operation Crosstown narrowed down a list of feasible projects from the idea lab, and now it will start initiating some of those ideas.

"The project calendar we just announced is about making the ideas that the community sourced a reality," said Dylan Sandifer, program manager for Operation Crosstown.

This spring, volunteers will install a bike repair station near the bus stop shelter at Poplar and Cleveland. The station will consist of a concrete pole with various bicycle repair tools and an air pump. Its installation was originally set for May 9th, but shipping problems have pushed the date back.

"The Poplar/Cleveland bus stop is the number two hub of public transit in the city. It's a very popular area for people who use buses and bikes as their primary transportation," Sandifer said. "We'll have a free bike repair station there so if someone gets a flat tire, they won't have to miss work."

On June 20th, outdoor fitness equipment will be erected on a yet-to-be-announced "prime piece of green space in Crosstown," Sandifer said.

"It will be similar to RiverFit [in Tom Lee Park], but we're making it with what Crosstown wants," Sandifer said. "We'll have some picnic tables and some outdoor games, like bocce and horseshoes. We'll have a community meeting to let people vote on what they want. It's a fitness area, but it's also a community park. It won't be just a workout area."

On the following Saturday, June 27th, the CHC will host an outdoor block party at the new fitness park. There will be food trucks and demonstrations on how to use the equipment.

Operation Crosstown will partner with Clean Memphis on August 22nd to pick up litter and brush on the V&E Greenline, which begins just north of Crosstown Concourse and runs through the Rhodes College area.

And some time in the summer, with a date to be determined, the CHC will host a pop-up dental clinic for people without insurance in the Crosstown neighborhood.

They're also working on adding more public art to the area. Operation Crosstown is currently seeking artist proposals for a mural on the south wall of Midtown Crossing Grill. The application form is available at churchhealthcenter.org, and there is a May 22nd submission deadline.

In October, Operation Crosstown will oversee another public mural project in the area, but the location for the artwork has not yet been released.