The Romance Isn’t The Only Thing That’s Doomed

Ask any high school teacher — or, for that matter, any high schooler — and they’ll tell you the surest way to get two teenagers to fall in love is to tell them they can't see each other. Or you could ask Stephanie Meyer, author of the Obama-era, vampire love juggernaut Twilight. The beautiful, yet tragic Bella can't be with the beautiful, yet tragic Edward, because he's a vampire and will literally kill her and doom her immortal soul to an eternity of thirst for human blood if they, you know, do it. That high-octane forbidden love powered three billion (with a "b") dollars in box office receipts and launched the careers of Kristen Stewart and Robert Pattinson, as well as the other great toxic relationship saga of our times, Fifty Shades of Grey.

The problem for would-be producers of romances targeted toward teens, such as director Justin Baldoni and writers Mikki Daughtry and Tobias Iaconis, has become, how to top vampirism/lycanthrope and borderline psychopathy as forbidden love factors? Somebody got an extra cookie in the writer's room the day they came up with cystic fibrosis. 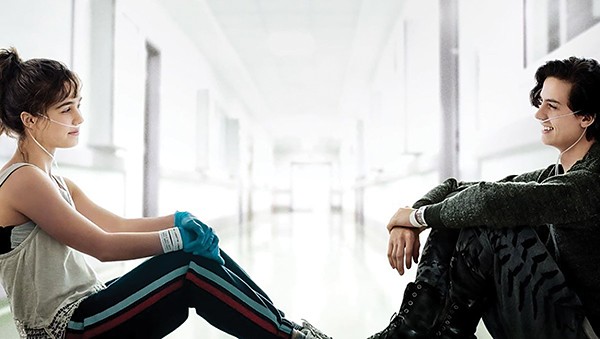 Stella Grant (Haley Lu Richardson) is just like any other teenage girl. We meet her getting ready to go on a beach trip with her friends. Except, she can't go, because she's in the cystic fibrosis ward awaiting a lung transplant. The go-to wasting disease for a romantic lead used to be tuberculosis, as in Moulin Rouge!, but CF, it turns out, is the perfect update. You need something that's not too visually gruesome so your lead actors can still be pretty, which is why there are so few romantic comedies involving, say, leprosy. As if that's not bad enough, Stella's also got OCD. Not the kind that makes you hoard your urine in little jars and wash your hands until they're bloody, but rather the kind that makes you keep several to-do lists and take your meds on time. Aspirational OCD.

Her compliance-based OCD is the reason Stella, whose name in no way resembles Bella from Twilight, is as healthy as she is. She's a perky presence on the CF ward, hanging out with her gay pal Poe (former Hannah Montana hand Moises Arias), sneaking into the NICU to ogle the new babies, and trying to stay on the good side of Nurse Barb (Kimberly Herbert Gregory). But the new guy on the ward Will Newman (Cole Sprouse) doesn't have such a sunny disposition. His cystic fibrosis has given him a dark worldview, which he expresses thorough his comic art and combat boots. Unlike Stella, he can't get a lung transplant because of a secondary infection he picked up when he was a child. So he's a subject in an experimental drug trial, and his devil-may-care attitude toward compliance with his prescriptions drives Stella batty.

But what makes love inevitable between the uptight perfect girl with a deadly cough and the Byronic bad boy fixer-upper opportunity is the fact that patients with cystic fibrosis must stay at least six feet apart at all times or risk cross contamination. (To tell you why the film is called Five Feet Apart instead of Six Feet Apart would constitute a spoiler, but the title has drawn the ire of CF groups.) If Stella gets infected with Will's germs, she will no longer be eligible for the life-saving lung transplant she's been waiting for. That means no kissing, or other, more vigorous forms of fluid exchange. You thought turning into a vampire was bad — this girl writes her own smartphone apps! Her life is valuable!

In what seems to be a developing theme for 2019, Richardson, the female lead, is way better than the material demands from her. Last seen alongside Regina Hall as a waitress in Andrew Bujalski's Support the Girls, Richardson has confidence and charisma to spare. She's game enough to do colostomy bag jokes, but she's got her work cut out for her delivering lines such as "You're not the thief anymore, CF! I'm the thief!"

As her paramour, Sprouse is vapid, well-scrubbed, and doomed. Like every one and every thing in this flaccid, obvious screenplay, he's patched together from bits of other, better films. He's got Timothée Chalamet's haircut and Jack from Titanic's desire to draw you like his French girls. Still, Five Feet Apart handily beat its estimated opening weekend take, and I wouldn't be surprised if it had legs. As writer/director Paul Schrader said after First Reformed lost the Best Screenplay Oscar to Green Book, "Never underestimate the power of mediocrity."