You know what 901 FC looks like? A playoff team.


The visiting Bethlehem Steel on Saturday were only one point behind Memphis in the Eastern Conference standings before the contest, so the potential for a tough match was there. But Coach Tim Mulqueen and his squad revved up the steamroller and flattened any notion of a competitive contest in the first quarter-hour. With a 5-0 drubbing where every player excelled, 901 FC climbed ever closer to that elusive last playoff qualification spot.

It looks like Mulqueen’s roster-tinkering over the course of the season has finally constructed a squad with the right tools for his game-plan. We’ve seen how the attack has clicked into gear over the past few games, but there was always a chance the team’s good run of form could come to an end after the Pittsburgh Riverhounds snapped the team's four-game winning streak last week. But just as he’s done many times before, Elliot Collier stepped up to assuage any nerves with less than seven minutes on the clock when he slotted his shot underneath the despairing Bethlehem goalkeeper.


From there, it was oneway traffic. The midfield looked devastating when picking up the ball between the lines; Lindley and Adam Najem surged forward as often as they could, looking to play positive, forward passes, and the 901 FC attack never let up for a second, raining in shots to seize complete control of proceedings.

The Bethlehem defense had no answer for the home team’s gusto. Press high up the pitch? No problem, defender Liam Doyle can just play an inch-perfect long ball to a streaking Marcus Epps for the second goal. Squeeze the midfield? Lindley and Najem didn’t even look bothered as they sucked in multiple defenders before dispatching an assist to Brandon Allen (the forward’s tally for Memphis rose to eight) for goals three and four.


The icing on the cake came with Doyle’s tap-in after a corner-kick routine. If it hadn’t been apparent by then, that made it game, set, and match. Allen could have even grabbed a hat-trick when Lagos Kunga crossed to the wide open striker, but it wasn’t to be. The game kind of petered out after that, but when you’re five goals to the good, it’s fine to ease up a little.


This was truly an impressive display from the whole squad. Beyond the excellent midfielders and attackers (who mustered 21 shots), goalkeeper Jeff Caldwell and the Memphis defense restricted Bethlehem to zero (!) shots on target for 90 minutes. That puts Caldwell up to six clean sheets for the season. 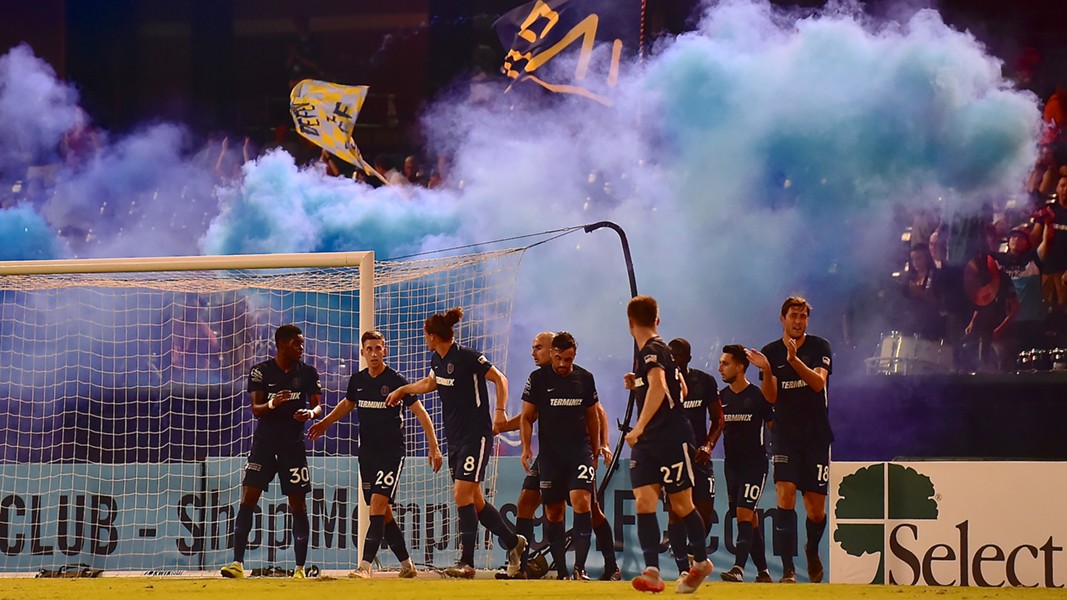 Memphis had already looked like a well-oiled machine over the last month, but an utter thrashing is the perfect tonic after what could have been a morale-sapping narrow defeat to Pittsburgh. And with only four games left in the season, it’s exactly what Memphis needed. The team remains in 12th place, five points out of the last playoff spot; each match from here on out is a must-win contest. Next up is fifth-placed Indy Eleven on Saturday, which on paper seems like the toughest opponent left on the schedule. However, the Indianapolis side has lost its last three games, making it the perfect time for Bluff City to strike.


And who’s to say Memphis can’t pull off the win? Mulqueen has his team’s foot pressed down firmly on the accelerator, with the entire attack in a goal-scoring mood and the rest of the squad on the same page heading into crunch time. It will be a fight to snag that number ten spot in the Eastern Conference, but 901 FC has more than shown lately it’s up for the challenge.