Breaking entertainment industry news: Memphis rapper Blac Youngsta made headlines this week when a couple of strippers at the L.A. club Ace of Diamonds got mad at him for leaving the club without tipping. So the ladies did what people do these days: They posted a video. "We thought at least he was going to throw some ones," a disgruntled dancer said. Youngsta later copped to splitting without tipping, but blamed it on the women wearing "cheap-ass lingerie" and "not getting naked."

"Dean Martin's is the longest, then Roy Horn's. Next is Sammy Davis Jr.'s followed by Jimmy Durante's and then Jerry Tarkanian's. What about Elvis'? Well, his is not very long at all." Don't worry, it's not what the writer wants you to think it is. Vegas just copycatted Memphis by naming its own Elvis Presley Blvd. It's not a very lengthy boulevard, apparently. That's what this opening passage from the Las Vegas Sun's story alludes to. Not the other thing. Probably.

You know what's awesome? Thumbing through Twitter, seeing a post from Avengers director Joss Whedon that reads, "this THIS this," and realizing he's linked to a story about Memphis. What's even cooler is finding out he's linked to a beautiful artist's diary about an inspirational trip to Memphis' National Civil Rights Museum. Artist Christopher Noxon wasn't prepared for what he'd find on Mulberry Street. It moved him to create a visual essay with a URL that's too long to share, but googling "Lessons from Memphis" will get you there. No punch line this time, just a tip. 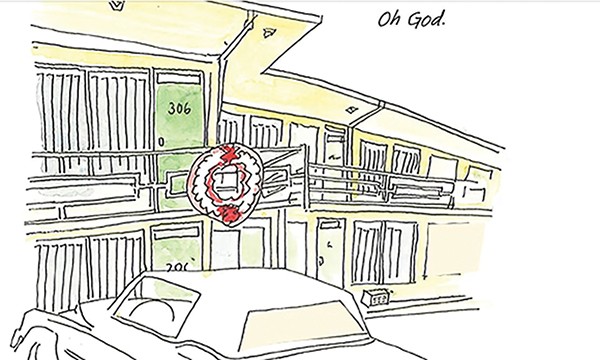