In an interview with The New York Times, radio host/Trump ally Alex Jones described his audience as "the teeth" in the president's "information warfare."

For context, Jones, who thinks 9/11 was a false flag operation carried out by the U.S. government, name-checked The Memphis Flyer in his un-ironically titled 2012 report, "Devil Pyramid Rotting in Memphis." The Infowars host turned the true story of a crystal skull, placed in the Pyramid by Hard Rock Cafe founder/weirdo Isaac Tigrett, into a tale of supernatural horror. 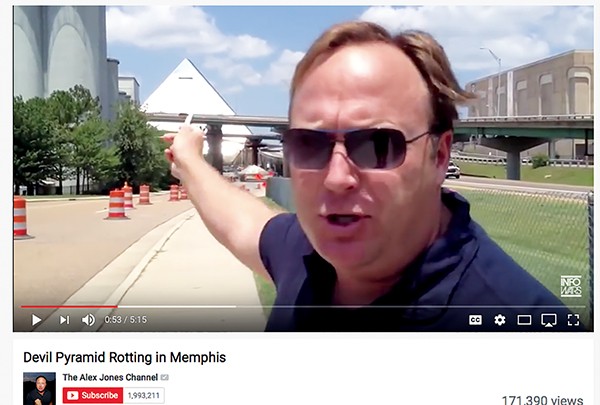 "Now, the [Pyramid] is cursed," Jones declared. "No one would go there anymore because of deaths and flooding and electrical problems. ... There was a skull up in the top, a crystal skull ... a little demon monkey, and little goblin charms hidden up in the capstone in a little metal box. And it just goes to show that the people who run the planet are really into this."

Memphis has inspired many things, including Elvis cosplay. And that has inspired a stream of international headlines like this recent one from England: "Elvis impersonator cleared of stealing charity collection at his mother-in-law's funeral."

Leicester resident C. Burroughs sang "The Wonder of You" at the service and convinced a jury he left the collection money on a pew.