To paraphrase Martin Luther King Jr.'s momentous "Free At Last" speech would be inappropriate for the Food & Drink section, but don't think we're not tempted. For years and years, anytime someone would have a problem with the Flyer's Readers' Poll results, they would say, "Hmmph. What do you expect from a poll that voted Red Lobster as 'Best Seafood'?"

Sure, we could argue about Red Lobster's tasty rolls, exuberant service, money-saving specials, and other things the chain has to offer, but now we don't have to. This year, after an impressive streak of placing number one in the polls, Red Lobster didn't even finish in the top three.

It's only fair to point out that the Readers' Poll has not loosed its chains completely. Of the roughly 110 restaurants that were voted into the top three, more than 20 are chains.

Restaurateur Jimmy Ishii is the king of Japanese cuisine in Memphis, with sushi fanatics and tempura fans flocking to his four Memphis-area Sekisui locations. As if Ishii's grip on first place in this category weren't enough, his East-meets-West fusion eatery Sekisui Pacific Rim bookends the notables with a third-place finish.

Rick Farmer preaches the gospel of buying fresh and local. He has earned a loyal following by bringing elements of classic French, Spanish, and Asian cooking to regional American cuisine. Angus filet of beef with mushroom-truffle Madeira sauce and gratin dauphinoise potatoes, anyone?

No matter how hectic the work, you can always rest assured that there's a Huey's famous burger, amazing onion rings, and a full bar on a street corner near you.

On a Saturday afternoon this laid-back neighborhood breakfast joint on Walker is the hottest meal ticket in town. People from every corner of Memphis cram into Brother J's to feast on homemade bread, fresh fruit, gourmet omeletes, and amazing whole-wheat biscuits that are denser and only slightly more precious than gold.

Ah, romance. It makes everyone act so very French. Walking into Paulette's is like walking into an old neighborhood restaurant on Paris' Left Bank. Hungarian flourishes aside, that's about as French as it gets.

Strawberries and cream to start, followed by turtle soup, then two poached eggs on an English muffin with ham, marchands de vin sauce, a fried tomato and hollandaise, with bananas Foster for dessert. Any questions?

With more than 130 choices and an average price of $30 a bottle, what's not to love about Le Chardonnay? And it's so divinely dark inside.

The most beautiful words in the English language are "a filet mignon, piped with seasoned mushroom purée, wrapped in applewood-smoked bacon, and smothered with sautéed garlic mushrooms." You'll find them on the Prime Cuts menu at Folk's Folly.

Chomping down on a rack of spicy, chargrilled ribs at the Rendezvous is just about the single most Memphis thing a person can do. Maybe they're the best ribs in town, maybe they aren't. Either way, they sure enough represent. And the lamb riblets are nothing to be ashamed of, either.

What, you were expecting someone different? Huey's has so dominated this category that maybe we should change it to "Best Huey's Burger." The spicy Senor Huey? The guacamole-laced West Coast Burger? The extra yummy Smokey Melt? Or just the "World Famous" Huey Burger? Really, you can't go wrong, and with seven locations in the Greater Memphis area, you never have far to go.

What's one measure of a Memphian? Answer: If you hear the term "K-Pie" and know exactly what it is and where to get it. The Kahlua-Mocha Parfait Pie at cozy Midtown bistro Paulette's may be Memphis' most beloved post-meal indulgence. There are also plenty of other delectables to choose from: crème brûlée, fresh Key lime pie, and various crêpes.

The jewel of the Grisanti family restaurant empire fits the bill whether you're looking for red-sauce-soaked Italian basics like homemade lasagna and spaghetti or more upscale fare. And though it isn't considered a steak house, Grisanti's has some of the best.

With a handsome décor and tastefully prepared variations on Chinese favorites (try the Mongolian Beef), this East Memphis-located fave is a cut above what many expect from national chains.

Bhan Thai is located in a large, intimate, converted house (the former home of Maison Raji) on a largely residential stretch of Peabody in Midtown and not on any kind of restaurant row. So it's a destination eatery -- and one worth seeking out, as many Flyer readers apparently have -- for its excellent cuisine. 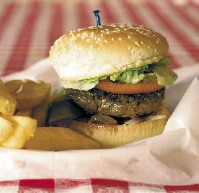 Though Midtown's Cleveland Avenue corridor is bursting with good Vietnamese restaurants, this veteran establishment continues to be the standard-bearer with its generous portions of Vietnamese (and Chinese) favorites made with fresh ingredients at bargain prices. Given its proximity to the Methodist Medical Center, it's a particularly popular lunch spot.

Is there anything quicker or tastier than an Indian lunch buffet? The colorful Midtown India Palace packs 'em in for zesty curries and tender tandoori and such flavorful off-the-menu favorites as chicken tikka masala and lamb saag.

Whether you want to showcase your own culinary skills, get prepared foods to take home for dinner, or just grab a quick eat-in bite, Wild Oats has the diversity and quality to satisfy the needs of any vegetarian or just health-conscious foodie.

Oysters Rockefeller with Thai lemon grass, Malaysian sambal, and Japanese sake; calamari with chipotle aïoli; shrimp with mango salsa: a few reasons why Pacific Rim-inspired seafood ranks high in the kitchen at Tsunami. Ranks highest according to the taste buds of Flyer readers too.

Memphis Pizza Cafe made a name for itself in Overton Square. Now it's also cookin' out east on Park and farther east in Germantown and Cordova. Which proves that Midtowners, East Memphians, Germantowners, and Cordovans know good pizza when they see it -- and taste it. Tomorrow, Collierville? The world?

Fino's Midtown location can't be beat (Madison at McLean), and the sandwiches and sides and pastas can't either. The teamwork behind the counter? Same goes. Fino's "does" a deli proud.

You see that army of waiters with the skewers, the ones walking the packed dining room of Texas de Brazil in Peabody Place downtown? Don't say a word. Just flip the "magic" marker on your table that says "feed me," and there you have it: meat that's hot off the skewer and onto your plate. Flip the marker over and those watchful waiters know just what you mean: bastante!

Memphians love a good restaurant patio. Great case in point, at the happening intersection of Cooper and Young: the patio at Cafe Ole. It's got all the ingredients: shade trees to cool things down; strings of lights to brighten the night. Go for it, frozen or on the rocks, with or without salt, day or night.

How does Camy's do it when it comes to pizza and other goodies, year in, year out, according to our Readers' Poll? By delivering when it absolutely, positively has to be at your door, on your plate, and in your mouth.

Believe it or not, there was a time in town when you couldn't come across a decent baguette. You couldn't come across an authentic baguette, period. La Baguette changed all that how many moons ago. It's still the champ and not only for its baguettes. Think of La Baguette's other traditional breads, pastries, specialty cakes, fruit tarts, and sandwiches. Flyer readers do in winning numbers.

With locations all over town, the brand-name Starbucks says it all: great coffee for customers inside and out, coming and going. For a taste of the real thing, however, try the day's house brew without the flavorings and without the special fixins'. Something so simple ... you never had it so good.

Plenty to chew on in this category but no clear winner.

A hit with Memphians from the get-go, Soul Fish does it right and that goes not just for the fried catfish and hushpuppies. Try the fresh vegetables. Try the spicy chicken and pork. And relax. The atmosphere's stylish but welcoming. And the prices? Your wallet will thank you. Thanks to owners Raymond Williams and Tiger Bryant and a terrific wait staff.