The women’s march was a good first step but much remains to be done.

I wasn't sure what to expect when I arrived downtown Saturday morning. I had some reservations but decided to attend the march at the last second. I didn't even make a sign. If I had, it would have said something like "Oh, FFS." Or "Meryl Streep Is Properly Rated." Or "Make America Read Again." There's always next time. Believe me, there will be a next time.

It wasn't my first rally or protest, but it was definitely the biggest. I don't think I've ever been part of such a large group of women before. But if it was truly a "woman's march," the crowd should have been much larger. I say this because it was about as diverse as an East Memphis yoga class.

People get defensive when this is brought up, and I don't mean to sound dismissive. Yes, people of varying ages, races, and genders showed up. I'm proud of the thousands of marchers who gave their time to stand up for women.

It was a good first step. The next step is intersectionality.

As I was leaving, I overheard a conversation between two black women.

"This was good. I needed this."

"Me too, but I wish I'd seen this many people out for MLK Day."

I feel bad if women of color didn't feel welcome or included in last Saturday's march, but I can't exactly blame them. 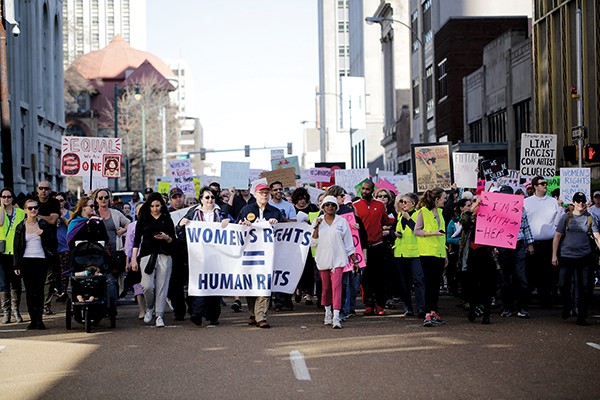 Why should they trust white women who keep siding with white men? Fifty-two percent of us voted for a candidate who openly boasted about "grabbing them by the pussy" without their consent. Four years prior, more than half of us voted for a guy who counted women by the binder-full in a debate. Too many white women either don't vote with their own interests at heart or are counting on everyone else to get it right. Now we've got a mess to clean up.

The day after the march, I attended a friend's birthday brunch. I didn't know everyone at the table, which is always a bit of a social landmine for me because I have no poker face. Here's what happens: Someone says something with which I disagree. I am physically unable to supress an eyeroll. People I know either engage me or move along. People who don't ask if there's something I'd like to say. Cue rant, followed by debate or awkward silence.

We were talking about safe topics like football (well, not safe in the literal sense, but you know what I mean) and work. Everything was fine. And then a woman at the other end of the table said "So, like, these — air quotes — marches. What are they protesting exactly?"

That's when the room started spinning and everything went dark. All was silent but for the echo of her voice. What are they protesting? Really? And what's with the air quotes?

Because the new president needs to be reminded at every turn that he is accountable to the entire country, not just the people who voted for him.

Because the Affordable Care Act insures millions of people, and if the GOP has a better idea, well, what's the holdup?

And if we can't have health insurance for all, we need Planned Parenthood more, not less.

Because our bodies belong to us, and we're smart enough to make choices for ourselves. We want to be able to start our families on our own terms with affordable reproductive care and child care.

Because Idiocracy wasn't supposed to be a documentary.

Because democracy doesn't end the day after the election. Or the inauguration. You don't have to agree, but this is how I feel. And this is America, and it's our right.

But I didn't want to ruin my friend's brunch, so I bit my tongue and stared at my plate. Yes, that's right. In less than 24 hours I went from "We won't be silenced" to "I don't want to make it weird."