Foster’s Beer: How the “Oil Can” Got to America

The last time I spoke with an editor in New Zealand, we left it at: "That's a great project, but you've got to get your own boat." I couldn't stay angry because I've always had a soft spot for the Kiwis and their Australian neighbors. They are staunch U.S. allies, yet refuse to take us seriously. Also, I like Christopher Koch novels, and their army has those really cool hats.

For me, it likely started back when cable television was scrambling for 24-hour content and introduced an entire generation of insomniacs to Australian Rules Football and Paul Hogan. Now that's football, I thought. These guys are really gonna hurt each other!

And then there was the great whacking Foster's Oil Can — at 24.5 oz., it made quite an impression on me: "No, Mom! I only had two beers!" The twist is that Foster's was created by a pair of American brothers who sailed from New York to Melbourne in 1885. Their beer wouldn't get to the United States until 1972, and when it did, it went big. 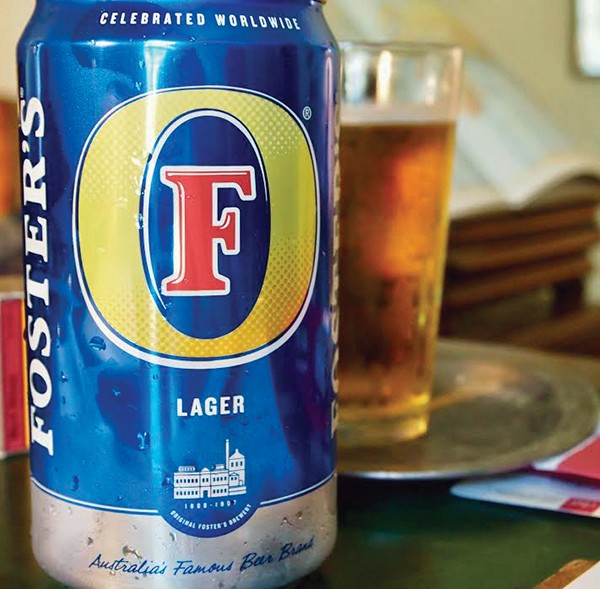 Before entering the U.S. market, Foster's was considered a premium brand in Australia and then, suddenly, it wasn't. Hard to say why really; the Aussies are not snobby as a rule. Perhaps they didn't appreciate our military's attempts at the time to napalm the length and breadth of Southeast Asia. As the brand fell from grace at home, however, it boomed stateside and in the U.K., where it is now their second-most popular beer.

In the 1970s and 1980s, premium beer in the U.S. merely meant "from far away," which posed something of a problem, as light lagers have a pretty short shelf-life, even under the best of circumstances. Australia is very far away — so far that it is already tomorrow over there.

To better recreate what's being quaffed in Sydney, the quintessential Australian beer is, in fact, made by Miller at Oil Can Breweries in Fort Worth, Texas, and Albany, Georgia, under the direction of a brewmaster they poached from down under.

Honestly, and this is going to sound like a cop-out, Foster's tastes like a Miller with an Australian accent. More accurately, it is a good example of one of those East Asian lagers that tastes like beer while managing a lightness that floats above that sour aftertaste of mass-market beers. And in a hot climate with spicy foods, those options are seriously underrated.

There was no telling that to one Leif Nelson, a Manhattan physical therapist and self-proclaimed beer aficionado, who sued Miller for false advertising for giving the impression that the beer was imported from Australia. The case struck me as odd because a) Leif obviously didn't read the side of the can before filing his lawsuit, and b) what beer aficionado would go to the mat over a brand like Foster's?

Again, it is a good, light, hot-weather beer, and I thoroughly enjoyed researching this column. But Foster's Lager is not intended to be discussed at length ... and certainly not by lawyers. It goes well with spicy Thai and Vietnamese food and, closer to home, with fried catfish and chicken. You might want to order it in draft or bottles though. While the 24-ounce Oil Can is great fun, it does force you to drink the thing in double time if you want to keep the last half of it cold. And you do.

In the end, Nelson's lawsuit was dismissed. He admitted that he really liked Foster's and would keep drinking it if the printing on the can had been more obvious. The crux of the psychological complaint behind the legal one seems to have been a Manhattanite's desire to feel "authentic" by drinking a beer made by the descendants of convicts exiled from the old Empire. And if you hoist a pint brewed in Georgia, that's exactly what you are doing.