John du Pont was the heir to a vast fortune his ancestors had acquired making powder for the U.S. Military, beginning in the Revolutionary War, and founding DuPont Chemicals. He was, Wikipedia tells us, an ornithologist, conchologist, philatelist, and the biggest benefactor the American Olympic wrestling team has ever seen, spending more than $400,000 a year on training and travel for wrestlers on his private Team Foxcatcher during the 1980s and early '90s. Then, one day, this scion of American establishment wealth and power shot and killed 1984 Olympic gold medal winner David Schultz in cold blood. That's when stories of his psychotic behavior emerged in the press. He had paranoid delusions, believing his ex-wife was a Russian spy. His relationships with some of his wresters bordered on sexual predator status. He consumed copious amounts of scotch and cocaine. As you might expect from someone who grew up in the arms industry, he really liked guns. The guy was a ticking time bomb protected by his wealth and privilege, until his crimes became too blatant to ignore.

The story seems ripe for a movie. There's violence, sport, and fodder for commentary on wealth and power. But director Bennett Miller's film about du Pont, Foxcatcher, is just mediocre, which is strange when you consider it was nominated for several Academy Awards. 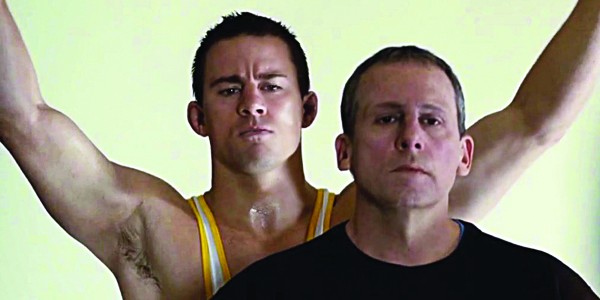 Foxcatcher is told from the point of view of Mark Schultz (Channing Tatum), who, along with his brother David (Mark Ruffalo), won gold at the 1984 Olympics. When it opens, Mark is struggling to make ends meet as a wrestling coach. So when he's approached by John du Pont (Steve Carell) and offered a salary of $25,000 plus free room and board to train full time for the 1988 Olympics, it's an offer he can't refuse. Du Pont seems sincere, but what at first seem like eccentricities become more sinister over time.

Or at least, that's how it would go if Foxcatcher were a good movie. In fact, Carell's du Pont is so clearly nutso from the first time we lay eyes on him, there's very little doubt that this dangerously inbred lunatic is going to explode into violence at some point. Carell is a gifted comic actor, and that skill set can translate into a truly inspired and versatile dramatic actor. But Carell's performance consists of a set of tics, a funny walk, and a raspy voice wrapped around a (granted, impressive) prosthetic nose.

Tatum is slightly more successful as Mark, who at least makes decisions and generally acts like a human being during the course of the film. But the best part of Foxcatcher is Ruffalo's subtle, empathetic portrayal of David. I can't object to his Best Supporting Actor Oscar nomination.

But I can object to Miller's Oscar nomination as Best Director, especially since he edged out Selma's more deserving helmer Ava DuVernay. Miller's got a good eye for visual composition, and the film is at its best when he and cinematographer Greig Fraser rove their camera around the du Pont's idyllic estate. But Miller's motto seems to be, "You like that shot? I got four more just like it!" The final product seems flat and often downright boring. The central question Foxcatcher should answer is, "Why did a rich and powerful guy like John du Pont kill an American hero and devoted father of three like David Schultz?" I saw the movie, and I still don't know.

Foxcatcher is a classic example of having all the right ingredients for a good movie but somehow they don't gel. Why that sometimes happens — why talented people get together with plenty of resources but still can't make a good movie — is one of the mysteries of the art.