From Scratch: Sara Embrey Bakes Sweet Treats Down on the Farm

It takes a lot for a new dish to break into that clique of traditional holiday favorites at the dinner table.

But Sara Embrey's mini coconut cream pies did just that this past Thanksgiving at our small outdoor family gathering.

Maybe not this Christmas, but in future holiday functions with the family, those little pies everyone was gobbling up will be there with the pumpkin pie, sweet potato and green bean casseroles, and turkey with cornbread dressing.

I asked Ruth McClallen Thompson, who brings the pies, where she gets them. She told me Sara Embrey in Coldwater, Mississippi, bakes them.

So I gave Embrey a call. 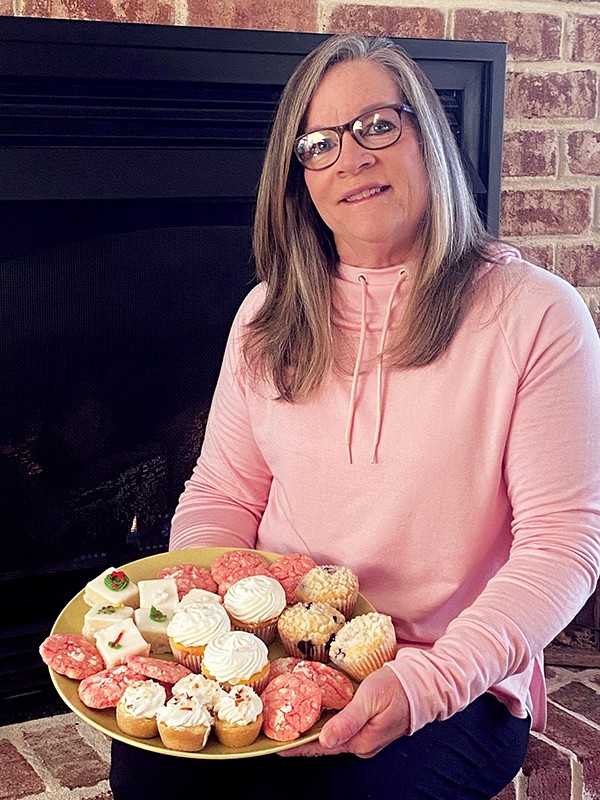 "Oh, gosh. My story is not exciting," Embrey says. "I couldn't cook when I got married. I didn't have a clue. My sweet husband cooked the first year. Thank goodness my mother taught me to read. So I know how to read a recipe.

"The first thing I ever cooked was spaghetti. And it was a package, a Lawry's packaged seasoning. It just told you to add water, and I succeeded."

Not all of Embrey's efforts were successful. "I'd put it in the garbage can before my husband got home."

She took a cake decorating class after they moved to Jackson, Mississippi. Students had to bake a cake before they decorated it. "I would come home with the cake and my husband would very quickly take it to work the next day. He's all about, 'Let's make a dollar here.'

"My family got sick of birthday cakes real quick, so we became pie people — or cobblers or something like that — for birthdays. And you learn to stick candles in that."

After they moved back to Tate County 30 years ago, Embrey began baking petit fours, which she learned how to make in another class in Jackson, and selling them at little league baseball games and church functions. People began ordering them for their children's birthday parties.

Embrey branched out to baking other things, including the coconut cream pies. "I kind of put three recipes together on those."

One recipe was for the filling and another for the topping. "But the bottom part is such a simple thing," she says. "All the crust is that store-bought cookie dough in those rolls that you cut. Just that with some flour added. You mix that up and put that in your tins and mash it around and make a pie crust."

Embrey is particularly proud of her lemon-filled cupcakes. "It's very similar to a lemon icebox pie, [with] that thick custard. I have a certain decorating tip you put down in there and you shoot that stuff down in the cupcake. The topping is some Cool Whip with the filling."

The Embreys live on a farm, where they have 30 head of cattle. "We moved out to the family farm about six or seven years ago. And listen to me, it's the best thing I've ever done. I'm feeding a calf right now."

Embrey, who doesn't even have a name for her business, does all her baking in her kitchen. "I have to keep my eye on the Mississippi Cottage Law to make sure I'm okay."

She bakes everything except wedding cakes, which make her too nervous. "If somebody calls me for a birthday cake or anything, I'll say, 'Let me have a picture of what you're thinking.' And, I'm going to be very honest. If I feel I can't do it justice, I'm not going to embarrass you or me.

"This is not going to pay my house note, so I can say, 'No.' It's not something I'm trying to make a living doing, but I have enjoyed doing it. There are some weeks where I may do 400 petit fours. But, as we say at my house, it's either feast or famine, where [the orders are] massive and then weeks when we're not doing anything. And that's the week where you go fish."