Dudebro superheroes smash into each other with cars in this prefab migraine of a movie. 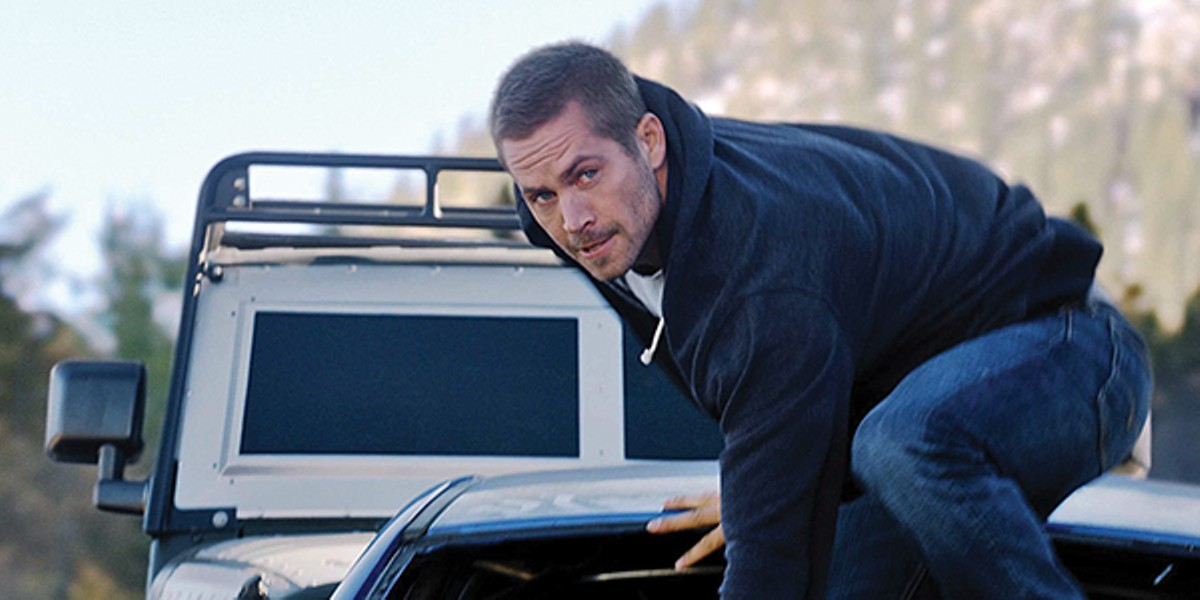 [After a preview screening of Furious 7, my wife Laura Jean Hocking and I sat on our back deck and pondered what we had just watched. Neither of us had ever seen a Fast & Furious movie before. What follows is an approximate transcript of our conversation.]

Laura Jean Hocking: I am now a person who has seen a Fast & Furious movie.

Chris McCoy: Did it live up to your expectations?

LJH: I wasn't expecting to get a migraine, but in retrospect it was inevitable. My head hurts all over — behind my eyes, on my forehead, on top.

CM: It was pretty punishing.

LJH: My eyes were twitching and I kept catching whiffs of random aromas, like perfume that smelled like candy and cake. I thought I was having a stroke.

CM: It was a giant commercial. Did you notice how all of the bad guys drove Mercedes, and the good guys drove domestics? Except for the time Paul Walker was driving a Subaru.

LJH: And the Corona.

LJH: Why does the supposed hero of the movie drink such shitty beer?

LJH: At least Kurt Russell had some taste.

CM: Kurt Russell was the best part of the movie.

CM: He was funny. But the rest of the movie was a bunch of bald white guys punching each other.

LJH: AND RUNNING THEIR CARS HEAD-ON INTO EACH OTHER! WTF?

CM: Seriously, the protagonist and the antagonist were too stupid to avoid killing themselves in a game of chicken. Except that they didn't die, because they're dudebro superheroes.

LJH: The hacker chick had no personality except for British.

CM: She had an accent instead of a personality.

LJH: Also, there's no way that wifey person could have known the sex of her baby. You have to be more pregnant before you find that out. Or she was the skinniest pregnant woman ever. And Michelle Rodriguez just looked like she smelled something bad the whole time.

CM: She had one expression: constipated.

LJH: Maybe she had a migraine from all that camera movement.

CM: That damned stuttery video effect kicked in every time there was a fight. They wanted it to look like a Bourne movie.

LJH: I spent a lot of those scenes with my eyes closed so I wouldn't puke.

CM: It was like it was trying to be a James Bond movie, too. It even had three exotic locations, like the James Bond movies of the '70s did. This is the seventh one of these, which makes it the equivalent of Diamonds Are Forever, which seems about right, quality-wise. And they kept ripping off James Cameron movies. They had the aircraft in the tunnel thing from Terminator 2, and the Mary Elizabeth Whatshername fake drowning gag from The Abyss.

LJH: Vin or The Rock?

CM: He didn't drown. Michelle Rodriguez did the "Don't you die on me!" thing with him after he jumped his car into a helicopter. Every time he got a plan, it was pretty much "drive the car off the cliff." That skyscraper jump was cool, though.

LJH: Vin Diesel and The Rock seemed like the same person to me. Also the bad and guy and the dead guy. Although I did have my eyes closed a lot, so I might have missed some important character development.

CM: The Rock was the one in the hospital who miraculously healed himself with the force of his man-rage and then shot up the helicopter with a handheld chain gun.

LJH: He was in the hospital for like 90 minutes.

CM: Speaking of which, the military was taking a pretty lackadaisical attitude toward the widespread use of heavy ordinance in downtown Los Angeles.

LJH: I debated leaving and walking over to Whole Foods to drink beer in the BBQ shack.

CM: Do you wish you had?

LJH: No. I survived. Now that I have seen one of those movies, I can have an opinion. Which was pretty much what I thought it would be, except for my new boyfriend Ludacris. He has nice eyes.