Jordan Peele makes the transition from comedian to horror auteur

Daniel Kaluuya in Get Out.

In his 1983 HBO comedy special, Delirious, Eddie Murphy had a bit about why the protagonists of horror movies are always white. Black people, he said, would just run at the first sign of supernatural trouble. He imagined a black couple inserted into the Amityville Horror scenario, buying a house that turned out to be haunted. "Oh, baby, this is beautiful. We got a chandelier up here, kids outside playing, the neighborhood is beautiful. ..."

Then a spectral voice whispers "Get oooout."

I don't know if that's where Jordan Peele got the name for his killer new horror flick, Get Out, but it makes sense. Both Murphy and Peele are black comedy geniuses in the vein of Richard Pryor, so Peele almost certainly remembers Murphy's routine. Get Out runs with Murphy's basic premise — that the black guy is never the protagonist in mainstream horror movies — and teases out the full implications. On the surface, the joke is that white people act stupid in horror movies, and that black people would be smarter in those situations. Ha ha, my team is better than your team. But the deeper joke is that white people are so swaddled in privilege, they can't imagine anything bad could really happen to them when the house whispers "Get out!," but black people, who get the shaft every day, are rightfully more paranoid. 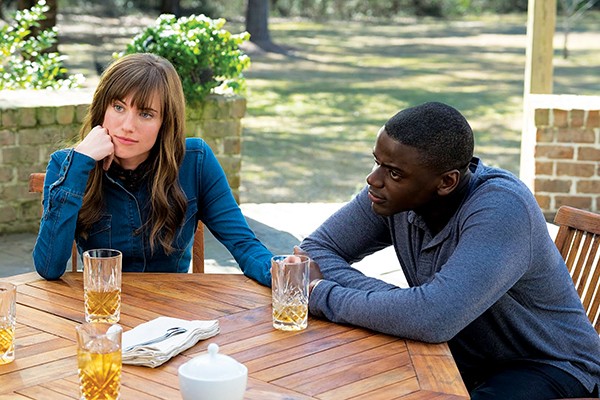 For the younger crowd reading, yes, Eddie Murphy was once a cutting-edge stand-up comedian with something to say, not just the Nutty Professor. Peele is in the same place in his career that Eddie Murphy was in 1983: trying to successfully manage a transition from TV to the movies. Murphy morphed into an action-comedy leading man, while Peele seems much more interested in being behind the camera. If Get Out is any indication, this is a wise move.

I'm a firm believer that if you can do comedy, you can do anything. Comedy is just technically harder than drama; so much depends on precise timing, crisp delivery, and a perfect reveal. These are also the tools of horror, so I wonder why it's taken so long to see a comedian make the genre move. Peele is going to be the biggest boost for the horror comedy genre since the coming of Sam Raimi's Evil Dead. But Raimi's idea of horror comedy is anarchic slapstick, while Peele is following his own race relations muse.

Chris (Daniel Kaluuya) is getting ready for a trip to rural New York to meet his girlfriend Rose's (Allison Williams) parents. Since Chris is black and Rose is white, his friend, Rod (LilRel Howery), warns him to not to go. Obviously, this upper-class white girl's parents are going to freak out when they find out she's dating a black guy. But Chris and Rose are quite smitten with each other, and he feels like he's got to get over this hurdle in their relationship. Besides, Rose urges, her parents are totally cool. Her dad, Dean (Bradley Whitford), is a doctor, and her mom, Missy (Catherine Keener), is a psychotherapist. They're educated professionals, so they're naturally liberals. Dean, Rose assures Chris, would have voted for a third term of Obama if he could! Later, when Dean repeats the same line to Chris, it sounds rehearsed — one of the many red flags that slowly raise Chris' paranoia level past the "GET OUT!" threshold. Turns out, Rod was right: Chris shouldn't have gone home to meet the parents, but not for the reason Rod thought. He envisioned a nightmare weekend of microagressions and racist sneers for Chris. Instead, our hero finds himself in a nest of gaslighting hypno-slavers with dashes of Re-Animator and Being John Malkovich for existential seasoning.

From the John Carpenter references (Rose's last name is Armitage, which was Carpenter's pen name for They Live) to the finely tuned tonal clashes that make an innocuous garden party into a skin-crawling creepshow, Peele shows his total control of the proceedings. By working on both the level of social satire and scary horror flick, Get Out is one of the finest directorial debuts in recent memory.