by Stephen Deusner and Chris Herrington

"We are the Pipettes," sing the Pipettes by way of introduction. "If you haven't noticed yet, we're the prettiest girls you've ever met." A prefab girl group not unlike the Shangri-La's or the Spice Girls, the Pipettes rock matching polka-dot dresses, horn-rimmed glasses, lacquered make-up, and cute nicknames (Gwenno, Rosay, and RiotBecki) as a means of repackaging prepunk sounds for post-punk audiences. More blatantly retro than Lily Allen or Amy Winehouse, but also just as modern, they're as much a project as a band, one that emphasizes their physical as well as musical attributes.

In one sense, this girl group might seem as suspicious as a boy band, but the Pipettes have a lot of fun with their constructed image. Their debut cleverly updates girl-group sounds to address modern concerns from a distinct — and playful — female perspective. In other words, what Ronnie Spector could only hint at, the Pipettes can sing about openly. On "Sex," which kicks off with a "Be My Baby" drum intro, they shut up a talkative date with a trip to the bedroom; "Dirty Mind," about an imaginative lover with OCD, could be a response to the Prince song of the same name. And of course there are (slightly more) innocent songs about boys ("I Love You"), romantic confusion ("Why Did You Stay?"), and dancing ("It Hurts to See You Dance So Well," which could get by on title alone).

Ultimately, it's the Pipettes' musical attributes that truly sell these dramas. Each has a strong and expressive voice individually, but together, they sound even better, mixing their vocals up in harmonies that are compelling and surprisingly complex. It helps that the Pipettes have a resourceful backing band, the Cassette, who effortlessly re-create the swing and shake of the '60s while pulling a few tricks from '80s English synthpop — all without intruding on the Pipettes' vocals. Everything comes together on the album's two best tracks, "Your Kisses Are Wasted on Me" and "Pull Shapes." The former features their most ecstatic vocals and catchiest kiss-offs, and in a just world, the latter would inspire a global dance craze. — Stephen Deusner. 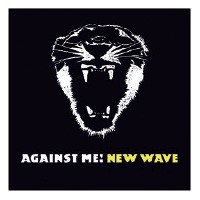 On their recent single "White People for Peace" (its self-deprecating title crucially revealing), four-piece Florida punk band Against Me! rails against a bad war with a "protest song in response to military aggression."

But, like so many great punk bands before them, they're most articulate when keeping politics local — trying to change the larger culture by changing their own scene first.

The title/lead track on this endlessly rocking major-label debut — produced by Butch Vig, who sweetens and strengthens Against Me!'s sound as he once did with Nirvana — refers not to a genre of music but to a metaphor for greater change that starts with bandleader Tom Gabel himself and extends to his fans, friends, and scene cohorts. Gabel actually opens the album by singing these lyrics: "We can control the medium/We can control the context of presentation/Well, is there anybody on the receiving end?/Reaching out for some kind of connection?"

Those lyrics don't exactly scan, but they do sing when backed up by a rush of anthemic guitar rock and gang vocals, and when they're underscored (but not undercut) by Gabel's self-conscious wit, by a personal touch, as on "Thrash Unreal," the raggedy, empathetic portrait of a young woman who might be an Against Me! fan, and by a willingness to implicate themselves in their own cultural critiques, as on "Americans Abroad," where the band relives a European tour by wondering how different they are from the "arrogant, ignorant American" stereotype.

"We can be the bands we want to hear/We can define our own generation," Gabel sings — no, promises — on "New Wave." This is not the kind of thing you hear from young, white guitar bands anymore. The spirit of hopeful punk defiance evokes Hüsker Dü, while the band's combination of direct, somewhat academic-sounding political language with an otherwise working-class perspective recalls the Minutemen. Those '80s indie bands were both smarter and less collegiate than the generations that followed them. In this regard, Against Me! is a throwback, and, with indie/alt rock in a particularly mumbly, navel-gazing state, a welcome one. — Chris Herrington