The Benghazi committee hearings were an unmitigated disaster for the GOP.

Congratulations, Tea Party. You set out to destroy the presidency of Barack Obama and ended up destroying the Republican party.

It's not that they don't deserve it. Pick your idiom: "Lie down with dogs, get up with fleas;" "Reap what you sow;" "Chickens coming home to roost." They're all appropriate descriptions of what happens when a radical fringe takes over an organization that first gave them succor. In this case, the "Freedom Caucus," the far-right wing of the GOP, made public fools of themselves twice in one week: first, by not being able to choose a leader of their own party; and second, with their grotesque performance at the so-called House Select Committee on Benghazi. The current chaos in the Republican party could be the parting practical joke by former speaker John Boehner, who couldn't abide the Tea Party in the first place. He appointed the seven obscure, back-bench, malevolent mad dogs to the committee and sent them off to do battle with Hillary Clinton. Big mistake. 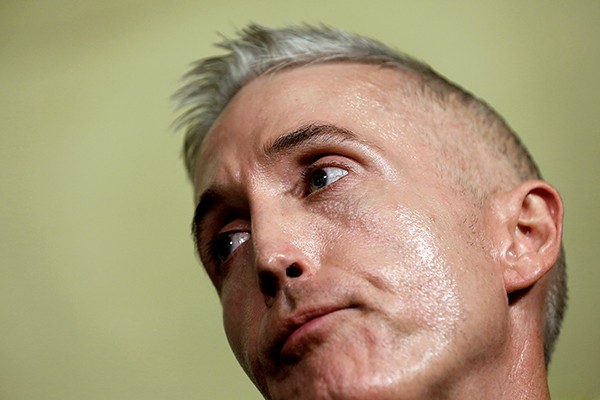 Committee Chairman Trey Gowdy had been whipping the steeds for months in anticipation of their much-publicized and nationally televised showdown with Hillary Clinton, but only the horses' asses showed up.

I'm sorry. I know better than to criticize someone's looks. That's Trump's bailiwick. But doesn't Trey Gowdy look like someone squeezed his head in a vise? The GOP's feral beasts tore into Secretary Clinton for 11 hours, unprecedented in American history. MSNBC's Mike Barnicle said if the Benghazi committee had "been in charge of the Watergate hearing, Richard Nixon would have finished his term."

Speaking of Nixon, Trey Gowdy has captured the crown as the sweatiest politician to appear on television since, well, Nixon. I was hoping an aide would hand him a towel. The attacks on Clinton were so vicious, that this was the first Congressional hearing with a cut man. The seven Republicans took turns releasing their unbridled rage at Clinton and President Obama — or anyone in his administration. Their tormented hysteria, compared to Hillary's unflappable demeanor, made the secretary look absolutely presidential. This Republican display of "Clinton psychosis" may well have elected her president. Nice one, Boehner.

Although the perpetually damp Gowdy insisted the hearing was not about Hillary, but gathering the facts about Benghazi, nothing new emerged from the previous eight congressional investigations. All along, Clinton has admitted that there was a well-documented security breach and has accepted responsibility for the tragedy. One must only Google "Khobar Towers" to find the moral equivalency. Still, one by one, the frothing mini-mob had to get their licks in and hope for that cable-news moment when they force Hillary to confess to the killing of Ambassador Chris Stevens. After all, she had previously murdered Vince Foster.

The "Freedom Caucus" acted like a bunch of frustrated prosecutors grilling a witness. All that was missing from the 11-hour harangue was the cigar smoke and a naked lightbulb hanging from the ceiling. I think they forgot that Clinton is a lawyer too. Like Whitewater led to Lewinsky, Benghazi led to emails. You and I both know that nobody emails anymore. The secretary could be reached by secure cable or phone at any time. This 17-month, $4.2 million inquisition was a forum to hurt Hillary Clinton politically and nothing else. Even Gowdy said the hearing produced no new information. Former Nixon aide John Dean said, "It's really embarrassing what the Republicans have done here."

In the end, the Benghazi hearings turned out to be a very long commercial for the Clinton campaign. No one likes to see a bunch of angry men screaming at a woman. In the final grueling hour, Hillary began to cough. I thought we were seeing a recreation of the filibuster scene from Mr. Smith Goes to Washington. At long last, Representative Elijah Cummings demanded the hearings come to a close saying, "This is not what America's about. We're better than that."

No, we're not. The butt-scratchers still think Hillary is part of some shadow conspiracy to overturn the Constitution, confiscate their guns, and make everyone wear black pajamas. I may have to recalibrate my opinion of Hillary. After her debate performance, and now her escaping from that right-wing coven of ghouls unscathed, I think we should start getting used to the phrase "Madame President." Alabama Congresswoman Martha Roby, after being told that Clinton returned to her Washington home following the Benghazi attacks asked, "Were you alone (at home)?" "I was alone," Clinton said. "The whole night?" asked the inquisitor. "Well, yes, the whole night," Clinton laughed, along with all the spectators, proving Hillary would have to get caught with a teenage intern for anything to stop her now.

Randy Haspel writes the "Recycled Hippies" blog, where a version of this column first appeared.