"How much of human life is lost in waiting?" is a line by Emerson quoted in one of the worst movies of all time, Indiana Jones and the Kingdom of the Crystal Skull. I could not help but think of it while watching M. Night Shyamalan's Glass, the capper to a trilogy that took 20 years to make. It started with 2000's Unbreakable, a drama whose ending twist explained that it was really the prologue to the adventures of a superhero, David Dunn (Bruce Willis), and a mad genius, Mr. Glass (Samuel L. Jackson). 2017's Split was about James McAvoy's dissociative identity disorder-suffering villain, The Beast, with an ending twist that this took place in the same universe as the previous film, with the director resurrecting earlier characters. Glass is here to let these superbeings finally be unbound, which it tries to accomplish by stranding them in an insane asylum and locking them in cells for most of the film.

Shyamalan was hailed as a wunderkind after The Sixth Sense. He quickly fell into self-parody: His twists strayed to left field, his quirky dialogue turned odd. I prefer his films when they got weird. The Village has so much craft and prestige wrapping its silly, trashy plot. The Happening had none, and I love it the most: the cast speaking entirely in non sequiturs about a world taken over by angry plants, who in the end are defeated by love. Pure, glorious schlock. 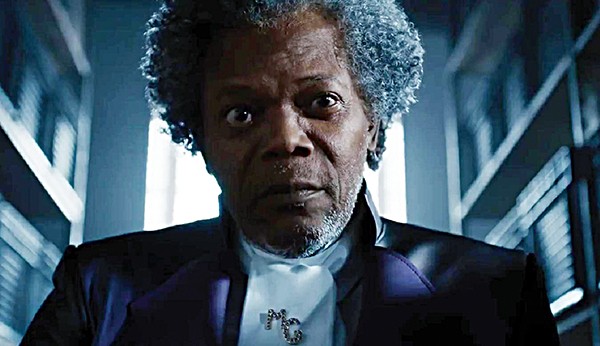 Like Spielberg, Shyamalan is good at dramatizing neurotic childhood fears of loneliness and abandonment, but when the emotion becomes positive, it gets manipulative. Orchestral music tells you to feel happy, but you might feel alienated instead. Shyamalan is great at showy long takes. He loves to hold on a medium or close-up reaction shot well past the point most movies cut. It's both economical and unnerving.

I watched all of his unclassifiable trilogy in one day, like a child forced to smoke a pack of cigarettes in order to hate them. Unbreakable is a dour retread of The Sixth Sense, enlivened by Jackson in a purple jacket and shock hair dramatizing the nightmare of brittle bone disease. Split is buoyed by McAvoy.

Unfortunately, Glass is horrible, but it's as odd and idiosyncratic as his other films. Psychiatrist Dr. Ellie Staple (Sarah Paulson) captures Dunn and The Beast and moves them into an asylum with Glass. She tries to convince them that their superheroic abilities are just delusions. When Dunn believes her, he does so because the story needs to sideline him, and the seams of threadbare writing start to show. Most of the budget may have gone to the salaries of the three headliners, and their schedules might not have connected, as they rarely share the same screen.

For half the runtime, Jackson is in a comatose state, staring emptily from a wheelchair, and when he wakes he says meta lines that might have been fresh 20 years ago, when Unbreakable opened with text explaining what comic books are.

Memphis filmmaker Chad Allen Barton has pointed out that Shyamalan is a religious storyteller. He often shows characters needing to believe in themselves, their family, and the afterlife. This is usually expressed in a spiritual way and affirmed with an inspirational twist. This faith serves an additional role of keeping expensive special effects to a minimum.

In what other superhero movie would the final fight between good and evil (in a parking lot) cut away at first punch to the viewpoint of nameless extras looking at a van? Or be preceded by Jackson pointing at a skyscraper where the fight would have occurred had the film had more money? Shyamalan is interested in not just twists, but delayed gratification.

In the theater on opening weekend, you could feel the excitement slowly go out of the audience. The final twist here is a conscious wrongheaded choice that is bugfuck in its disconnection from viewers' enthusiasm, yet lovely for its wrongness. Marvel is sleek and sometimes great, but when it doesn't fire on all cylinders, it smothers you like a committee-made sitcom. Glass is terrible but at least feels personal.

The finale doesn't work as storytelling, but it might make sense as an accidental middle finger to the idea that superheroes are inherently inspirational, when the reason for their omnipresence is monetary, as with westerns and Roman movies before them. Remove the money, and you lose the faith.