Élodie Yung as the Goddess of Love.

I still remember the excitement I felt seeing the first trailers for 2004's Sky Captain and the World of Tomorrow. Kerry Conran's film had a visual style derived from the pulp sci-fi of the prewar era, complete with ray guns, rockets that were silver and shaped like rockets, and giant transforming robots that evoked the Fleischer Studios classic animated Superman serial. The special effects were done entirely by CGI — there were almost no sets built, with the actors working in empty rooms against green screens, which promised a cheaper, more flexible way of making images of epic scope. The film's aesthetic sense was unlike anything else in theaters at the time. Sign me up.

But once I saw the film, it became clear that the filmmakers had put so much energy into perfecting the visual aspects, they neglected to write a script. And while the design sense was near perfect, the technology to seamlessly integrate CGI images and real characters just wasn't as good as advertised. I was incredibly disappointed.

You'd think I would have learned my lesson, then, when I saw the first trailers for Gods of Egypt. The imagery looks like nothing else in theaters. Better yet, it wasn't based on either Marvel or DC intellectual properties, but the rich, and to Western eyes, bizarre world of ancient Egyptian mythology. Sure, it was clear this was going to be a big ole cheese plate, but it seemed like the pieces were in place for something different and entertaining.

It must have seemed like that to Australian producer/director Alex Proyas, too, whose directing credits include The Crow, the underrated Dark City, and the massively overrated I, Robot, which came out in 2004, the same year as Sky Captain and the World of Tomorrow. Take the Egyptian pantheon — Ra, Horus, Hathor, Osiris, and Set — and their mythic sibling rivalry for the throne of Egypt, reserve plenty of render time for your computer graphics people, and boom, instant blockbuster. 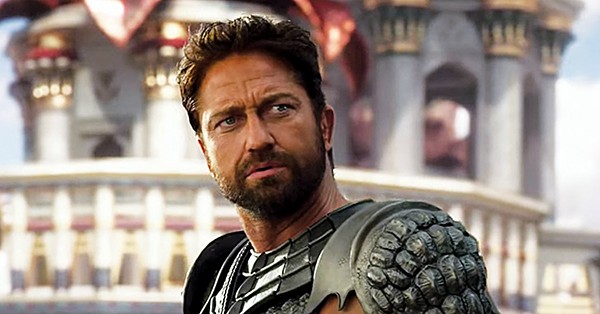 But a funny thing happened on the way to the pyramids. Proyas made exactly the same mistake as Kerry Conran: He didn't hire a writer — or rather, he hired Matt Sazama and Burk Sharpless, who penned my personal worst film of 2014, Dracula Untold. I'll give the writers this much credit: Gods of Egypt is a step up from their entry in the vampire story sweepstakes. Dracula Untold was a work of gut-wrenching stupidity, whereas Gods of Egypt is just drooling tedium.

The intended hero is Bek (Brendon Thwaites), an acrobatic thief free from the burdens of personality and charisma. We meet him stealing a dress for his lady love Zaya (Courtney Eaton) to wear to the coronation of Horus (Nikolaj Coster-Waldau) as king of Egypt, and thus, the entire world. Like The Witch, Gods of Egypt is firmly within the point of view of the place and time in which it's set. This is effective in The Witch, because it evokes terrors made obsolete by the Age of Reason. It doesn't work in Gods of Egypt because the writers just shoved Egyptian mythology through a Save the Cat screenplay formula and knocked off early for cannabis smoothies. The gods Horus and Set (Gerard Butler) assume winged form and dogfight with magic fire lasers as Apophis the Giant Worm of Chaos literally drinks the Nile River in the background, and yet it's deathly boring.

But it's not just the screenwriters' fault — there's plenty of blame to go around for this debacle. The gods are arrogant and powerful beings who walk among mortals for some mythically obscure reason, but there's little difference between Coster-Waldau's portrayal of the alleged hero Horus and Butler's glowering, testosterone-poisoned Set. With their birthright rule and golden blood, Proyas wrings fascist overtones out of the gods' struggle for power. Nor will love save us: Horus and Hathor (Élodie Yung) have no visible chemistry — the jerk-god hero's idea of romance is humiliating the Goddess of Love by repeatedly dunking her in pools of water. The occasional attempts at humor fall completely flat, but in the screening I attended, there were plenty of laughs. This is the kind of film where a major character's death was met with an audience member loudly exclaiming "You have got to be KIDDING me!"