The quest for a first, middle-school kiss makes for some good, if familiar, comedy

Few films of the 21st century have had as long a shadow as Superbad. Written by high school friends Seth Rogen and Evan Goldberg, it was a huge hit in 2007, launching one of the young century's premiere comedy teams and spawning a legion of imitators. In it, the two high school protagonists (named Seth and Evan) try to score some booze for a party that takes on almost mythical status for them as they run from the cops (Rogen and Bill Hader, in star-making turns) and try to live up to the impossible standards of coolness they have developed in their heads.

Superbad is itself part of the legacy of Freaks and Geeks, the millennial high school TV series created by Paul Feig where Rogen, James Franco, and a number of other actors such as Lizzy Caplan got their start. Together, the show and the movie took the Hughesian vision of American high school as a rigid caste system of the rich, the popular, the athletic, the nerdy, the poor, and the slutty and adapted it to the new realities on the ground. Just as Animal House inspired countless numbers of frat party comedies, every coming-of-age comedy since Superbad worth its salt has been based around young misfits on a quixotic quest for fun. 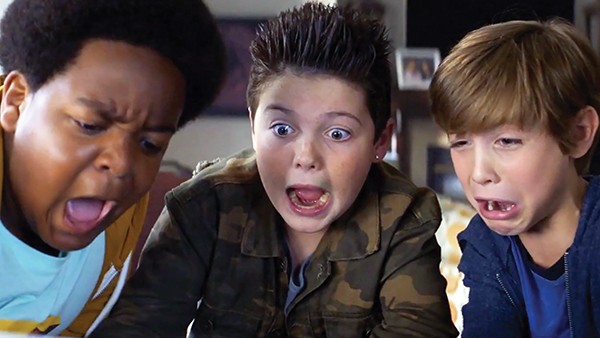 Max's first crush is a girl named Brixlee (Millie Davis), and he's been making a ceramic necklace in art class for her as a gift. After following her to a skate park, the Beanbag Boys improbably manage to wangle an invitation to a party at the home of cool kid Soren (Izaac Wang). Brixlee will be there, Soren tells Max — and there will be kissing.

That's just the beginning of the trio's descent into low-grade vice that unfolds naturally over the day of the party, as the trio tries to prove, in Max's inspiring words, "Are we fifth graders — or are we sixth graders!?" The key to this kind of comedy is getting the characters right and balancing the comedy beats with enough genuine peril so that the stakes drive the conflict forward without much laughter-killing real danger. On the character front, the film succeeds. The Beanbag Boys fit together naturally. Tremblay, who got his start opposite Brie Larson in Room, seems destined for leading-man status in a decade or so. Williams gets a laugh for crying through a choir rehearsal of "Walking on Sunshine" after finding out his parents are divorcing. Noon is a musical theater nerd who must reclaim his enthusiasm for singing in the face of bullying. At times, the sixth grade dynamic seems to be more Hogwarts than Shermer, Illinois, with Atticus (Chance Hurstfield) and his scooter gang playing the roles of Draco Malfoy and the Slytherins.

The script has its high points as well. The boys' attempt to spy on teenage neighbors Hannah (Molly Gordon) and Lily (Midori Francis) leads to what must be the best drone-based comedy sequence ever put to film. But the film has the misfortune of being released only a few months after Booksmart, and it simply isn't in the same league as that coming-of-age comedy masterpiece. The Beanbag Boys' painful naiveté works for a while but becomes a one-note joke as the film wears on. Good Boys knows how to successfully apply the Superbad formula but never manages to rise above it.