Good Morning, America. How Are You?

You want a first-world problem? Here's one: Try writing a topical newspaper column on the day your fellow Americans are voting in one of the most significant elections of your lifetime. You have no idea how it's going turn out. Will the tide of racial and political divisiveness, bigotry, science-denial, media-bashing, misogyny, corruption, and blatant daily lies and exaggerations as presidential policy be turned back? Or will the course we embarked upon in January 2017 continue unabated? Your call, America. Don't screw it up.

By the time this column is being read, we will, I hope, have a pretty good idea of where America is heading. But as I write it, on this first Tuesday in November, I have no idea. None. And only a fool would make a prediction and risk looking like, well, a fool. 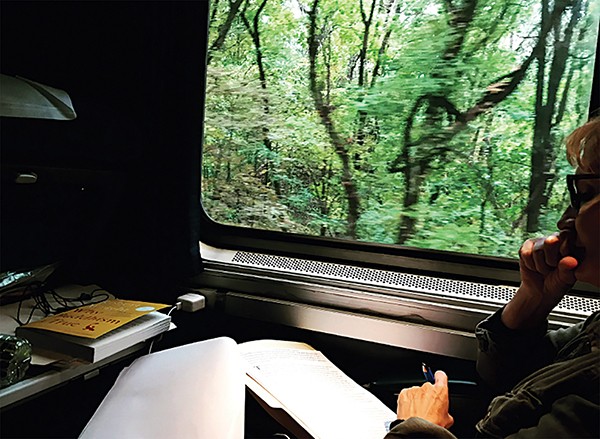 So, let me tell you about my weekend.

My wife and I took the train to New Orleans last Thursday for a little getaway to the land of beignets and booze. We hopped on the City of New Orleans at 6:45 a.m. and settled in for the eight-hour ride, which, at the ticket price, comes out to around $7 for each hour of travel — quite the bargain, honestly.

The pace is slow, but it doesn't take long until you just give in to it. You're on the train. You can't get off. There's no hurry. The rhythm seduces. The spacious, comfy seats recline like a Barcalounger, replete with leg- and foot-rests. There are outlets for your electronics, and nice reading lights. The Delta slides by outside the window — swamps and forests and fields and tiny forgotten towns with names known only to the locals. You can't stop humming that song.

You want a drink or something to eat? You stagger up through the passenger cars to the club car and order like a boss. Stagger, because the train rocks enough to keep you grabbing passenger seat-backs on your journey down the aisle. There's a running joke: "You been drinking?"

Every couple of hours, the train slows, and the conductor announces a stop: "This is Yazoo City. All my smokers got five minutes, but don't leave the platform or we will leave you in Yazoo." A fate worse than emphysema, no doubt.

We've been to New Orleans enough to know that the French Quarter at night is for amateurs and young folks — especially on a weekend when LSU is playing Alabama and the Saints are playing the Rams. Half the town is walking around in football jerseys and carrying big plastic drinks. The other half is in Day of the Dead apparel. And carrying big plastic drinks. After dark, the Quarter is a freak show of drunks, strippers, souvenir shops, and loud, awful music. Been there, done that.

But the Audubon Insectarium and Aquarium are wonderful, and the Ogden Museum of Southern Art was a revelation. The food, as always, was splendid, especially in the CBD, just west of the Quarter. We tried Josephine Estelle, Memphis chefs Andrew Ticer and Michael Hudman's restaurant in the Ace Hotel, and it was aces. We also were delighted with a new-to-us Vietnamese/Southern fusion spot called Maypop. Check it out.

On Sunday, weary from power-shopping and the miles we'd walked, we headed back to the Amtrak station. It's located near the Superdome, where the undefeated Rams were playing the beloved hometown Saints. We fought our way through numerous impromptu tailgate parties — on sidewalks, random patches of grass, parking lots, street corners. Apparently, in NOLA, when the Saints play, any spot near the stadium is fair game for tailgating, even the lawn of the train station. Who Dat!

As we settled into our seats for the long ride back, I was struck again by the diversity and easy camaraderie of my fellow passengers. Everyone's friendly. Everyone knows we're all in it together for the next eight hours. So the vibe is, 'chill, enjoy the ride.' With any luck, everything will stay on track. And with any luck, by the time you read this, the country will be back on track — or at least headed in the right direction.

Good morning, America. How are you?