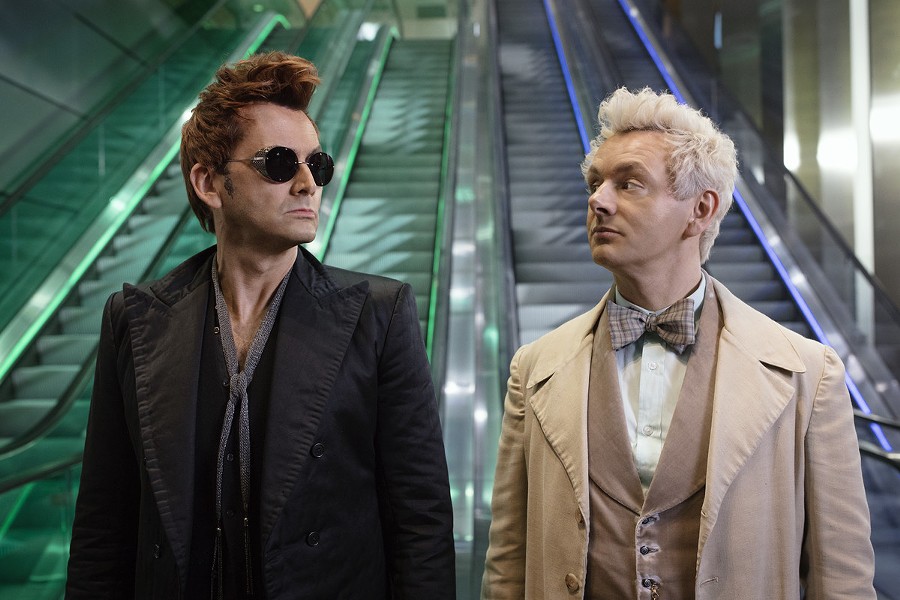 If there’s one specific genre trick the British seem to do a lot better than Americans, or any other English-speaking writers, it’s combining comedy and sci fi/fantasy. The quintessential example is Douglas Adams. He was a writer and story editor (what we would now call “showrunner”) for Doctor Who in the late 1970s whose speciality was punching up scripts where the Time Lord slyly acknowledged how silly it was to be saving the world from stuntmen in rubber suits. He originally pitched The Hitchhikers’ Guide to the Galaxy as a BBC radio play, and it metastasized into a bestselling book and hit TV series, before becoming, after a long delay, a mediocre-at-best film in 2005.

Neil Gaiman was Adam’s biographer before becoming a one-man publishing juggernaut with the seminal Sandman comics series and a run of novels such as American Gods. Early in his career, Gaiman had the incredible good fortune of co-writing a novel with Terry Pratchett, whose Discworld novels were the underground darling of the fantasy community. Pratchett’s work has plenty of social commentary, and they’re dripping with British wit, but they’re not, strictly speaking, satire, because he was able to make you care deeply about his comic characters, even as they fell down and humiliated themselves in baroque manners.

The novel they wrote together was Good Omens, and it's been a classic for two decades. Pratchett died in 2005, and since Gaiman had good fortune converting American Gods to TV (at least one season of it), Amazon and Aunty Beeb teamed up to create a big-budget adaptation.

Remember that Looney Tunes cartoon where the sheep dog and the wolf are friends until they clock in to their respective, adversarial jobs? That’s pretty much the relationship of the two co-protagonists of Good Omens. Crowley (David Tennant) is a demon from hell who took the form of a snake and tempted Eve in the Garden of Eden. Aziraphale (Michael Sheen) is the angel who was given a flaming sword and tasked with keeping the fallen humans out of the Garden. They’re minor characters in a famous, sweeping story — in this case, the traditional Judeo-Christian narrative of creation and revelation or at least the Anglican/Catholic version. Like Rozencrantz and Guildenstern in Tom Stoppard’s play, they take a jaundiced view of their role in the sweep of cosmic history. After being on Earth for a few thousand years, they come to like the humans they’re tasked with helping and/or tempting. And more importantly, they like the finer things in life the humans have invented. Since their respective home offices don’t really care too much about the details of what happens on Earth, occasionally they fill in for each other when one of them, say, wants to see this excellent new play called Hamlet that is currently playing at the Globe Theatre in London.

They’ve got a pretty good scam going on until it hits a snag. Crowley is tasked with delivering the baby antichrist to his prospective parents, an American diplomat who will be well positioned to help kick off Armageddeon. Unfortunately, there’s a mixup at the Satanic convent masquerading as a hospital where the baby switch is to take place, and the son of Satan goes home with the wrong set of parents—an average English couple who make the Dursleys from Harry Potter look positively fascinating.

Crowley and Aziraphale, faced with the possibility that they won’t be able to get good sherry in either heaven or hell, conspire to stop Armagedeon by subtly sabotaging the Divine Plan. Their biggest enemy turns out not to be The Adversary, but their own decadent incompetence. By the time they realize, 11 years too late, that the Antichrist has been misplaced, the Four Horsemen of the Apocalypse are getting saddled up.

And there are other complications. The subtitle of Good Omens is "The Nice and Accurate Prophecies of Agnes Nutter, Witch." Nutter (Josie Lawrence) was the last witch burned in England, and the only person who ever wrote a book of prophecy that was actually accurate. Her distant descendant Anathema Device (Adria Arjona) has the only remaining copy of the book and, since Agnes specifically told the family to invest in Apple early, a lot of money. It’s her job to stop the Antichrist, while the descendant of the Witchfinder General who burned Agnes, played by Michael McKean, searches England for her.
Good Omens has the kind of byzantine literary plot that inevitably gets flattened into incoherence when you try to make a two-hour movie out of it. The six-part miniseries is the perfect amount of time to devote to it, and Gaiman, who wrote the scripts, knows exactly how to use the format. With Frances McDormand narrating as the Voice of God, the result is like The Hitchhiker’s Guide to the Apocalypse.

Tennant, the best 21st-century Doctor Who, absolutely shines as Crowley. He puts his whole lithe body into the performance. Even glimpsed in silhouette as he rescues his friend from Nazi spies during the London Blitz, he’s instantly recognizable. Sheen, a veteran actor who has done everything from Emperor Nero to a minor part in Twilight, is his exact opposite, a twee goody-goody who secretly wants to be talked into some fun. The par are like an infernal/holy version of Molly and Amy from Booksmart, and every minute they’re on screen together is electric.

Gaiman and Sherlock director Douglas MacKinnon fearlessly play with form, such as in the third episode which stretches the cold opening out for 25 minutes before rolling the opening credits. It looks great, it’s full of twists and turns, and most importantly, it’s subtly hilarious. Some may find Good Omens too twee and byzantine for their tastes, but I’ve loved every second of it.