Good Trouble: The Life and Times of John Lewis

One of the most remarkable scenes in John Lewis: Good Trouble comes near the end, when the civil rights icon presides over a reunion of his former congressional staffers. Lewis was elected to the House in 1986 to represent Georgia's 5th district, which includes much of Atlanta, and served until his death last week at the age of 80, so there are a lot of people working in politics and government today who got their start in his office. One of the former staffers asks him to tell the story about the chickens, and Lewis just laughs. Haven't they heard that story enough?

At that point, the audience is already familiar with the story of how the young man from Troy, Alabama, got the nickname "Preacher." He was born the son of a sharecropper (the third of 10 children) and was 5 years old when his father spent the $300 he had managed to save to buy a farm of his own. The Lewises raised chickens, and John, who was known to wear a tie to school and carry a Bible everywhere, would herd the chickens into a corner of the barnyard and preach to them. Lewis told this part of his own superhero origin story to crowds throughout his political career, often using it to set up the punchline "... and every one of those chickens paid better attention to the truth than our opponents do!" His staffers had heard it over and over again, and yet they wanted to hear the old man tell it one more time because they loved him. 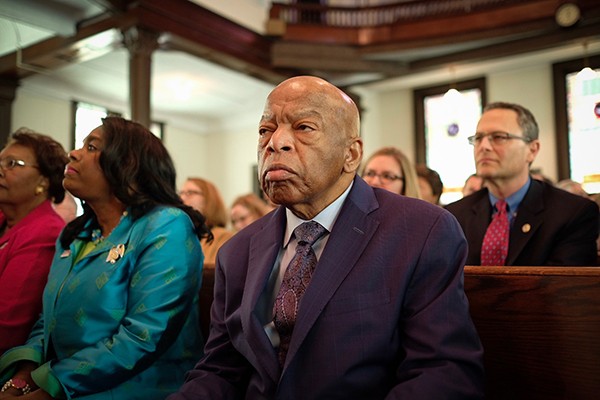 Produced by CNN's documentary films division and directed by veteran documentarian Dawn Porter, John Lewis: Good Trouble is not purely a work of hagiography. Porter devotes some time to the story of Lewis' contentious congressional election campaign of 1986, where he scraped out a runoff victory against longtime friend Julian Bond, a fellow co-founder of the Student Nonviolent Coordinating Committee (SNCC) and the Southern Poverty Law Center (SPLC). Lewis' scorched-earth tactics against Bond alienated many in the Atlanta Black community and ruined a friendship that had been forged in marches on Selma and Montgomery.

But Lewis' determination to win the election was part and parcel of his pugnacious personality. Anyone who thought they could outfight or outlast the person whom Martin Luther King Jr. called "The Boy from Troy" had another think coming. Lewis met Dr. King after being denied entry into the University of Alabama. He wrote the civil rights leader, whom he admired greatly, for help at the age of 18. Dr. King couldn't get him into Tuscaloosa, so Lewis went to college at Fisk University in Nashville, where he was in the thick of the lunch counter sit-ins and street protests that created some of the first integrated public spaces in the Jim Crow South. Fresh from that victory, he became one of the original 13 Freedom Riders — and the first one to be physically attacked by racist white mobs.

In 1963, Lewis, who had ascended to the chairmanship of the SNCC, helped organize the March on Washington for Jobs and Freedom. At age 23, he was the youngest speaker on the program that day. Two years later, he was at the head of the line of 600 marchers who attempted to cross the Edmund Pettus Bridge in Selma, Alabama, when they were attacked by Alabama State Troopers. Lewis absorbed the first truncheon blows on what would become known as Bloody Sunday. "I thought I was going to die on that bridge," says Lewis in one of the documentary's contemporary interviews.

The footage from the Pettus Bridge protest comes at about the halfway point in Porter's documentary, and she wisely lets it play unedited, from the standoff, to the police captain's order to disperse, to the charge. The scene is shockingly relevant today, as Black Lives Matter protesters continue the tradition of protest pioneered by Lewis, and many civil authorities continue the tradition of shooting themselves in the foot by responding to protests against police violence with more police violence. But that is the purpose of Gandhi- and King-style nonviolent protests — citizens put their bodies on the line to challenge the powers that be. They disobey immoral laws. They disrupt everyday activities to signify the withdrawal of the consent of the governed. Lewis says nonviolence is a "militant position" as Porter shows footage of the training sessions before the Nashville sit-ins. "As he strikes you in the cheek, look him in the eye," says the trainer.

"We had changed, so we continued to give them the opportunity to change," says Lewis.

"Congressman Lewis gave us the blueprint," says Rep. Ayanna Pressley. Pressley is not the only politician singing Lewis' praises in Good Trouble. Bill and Hillary Clinton are interviewed, as are House Speaker Nancy Pelosi and Representatives Alexandria Ocasio-Cortez and Ilhan Omar. President Barack Obama is seen giving a fiery speech at the Pettus Bridge in support of the Voting Rights Act. (Lewis says he "cried uncontrollably" when Obama was elected.) Representative Rashida Tlaib recalls how watching Lewis lead a sit-in on the floor of the House inspired her to get into politics.

Porter's cameras follow Lewis as he campaigns during the 2018 midterms and stays with him on election night as he makes congratulatory and conciliatory calls. The candid footage reveals a little of the man behind the legend. Even as a septuagenarian, he still liked to dance, and his favorite song was Pharrell Williams' "Happy." Lewis may have been a happy warrior, but he spent his last days fighting the Trump Republicans' assault on voting rights. "My greatest fear is that we will wake up one day and our democracy is gone."