It's easy to get distracted at the Agricenter Farmers Market. If the handmade olive oil soaps don't get you, then Mama D's Italian Ice will. Fortunately, Jeff Dunham is a man who knows what he wants. On a balmy Saturday morning, he strides up to Peach World Farms and places an order.

"I'll take a case of peaches and case of cukes. Picklers. Oh, and I better get some corn, too."

"Bread and Butter or Silver Queen?" asks the attendant. 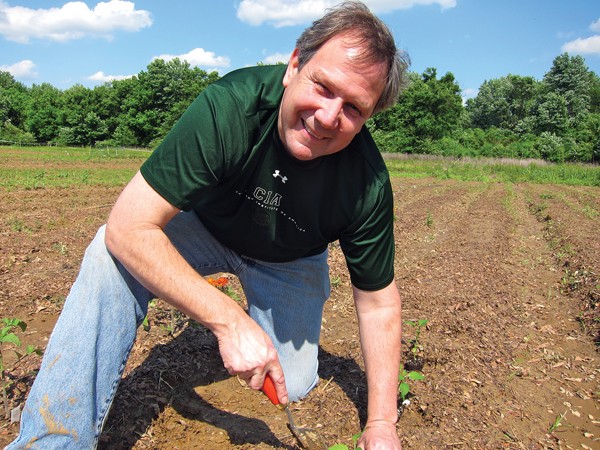 At 6'4" and built like a backhoe, Dunham can put away his fair share of food. But the cucumbers aren't destined for his dinner table. Rather, he's stocking the pantries of his Ivy Award-winning restaurant, the Grove Grill. Later that day, the peaches will turn up in a grilled peach salad with arugula, barbecued pecans, and fresh goat cheese. The corn is destined for a tasty Tasso ham succotash.

Today, Dunham also happens to be shopping for lunch. He's agreed to take the Flyer's Farmers Market Challenge, in which I team up with a local chef, we go shopping at the farmers market, and the chef cooks a delicious meal with what we bought. (Because why make your own lunch if you can get an award-winning chef to do it? Am I right?)

Keeping up with Dunham is harder than you might think. He walks quickly, and almost before I can write down what he's bought, he's on to the next stall. Today, he's keen on the red fish fillets at Paradise Seafood. This particular fish was caught yesterday off the coast of Gulf Shores, and the fillets are something to behold: pale pink, the color of rose quartz, with white veins zigzagging throughout. We buy a pound.

Before we head home, Dunham rounds out our shopping bag with eggs, Anaheim peppers, and eggplants from Windermere Farms. Then it's time to start cooking.

Dunham lives with his wife Tracey — with whom he owns the Grove Grill — in a ranch-style house near the White Station and Mendenhall area. The two met at culinary school in the 1980s. Today, we're also expecting the Dunhams' daughter, Christine, and her husband, Aaron Lamey.

"Oh, there's Aaron," says Tracey, hearing her son-in-law at the door. "We better plug in the waffle maker."

"Every family has somebody with quirky tastes," says Dunham, by way of explanation. "Aaron likes some of this stuff, but what he really likes is waffles — so we're making him waffles."

While the waffle maker heats up, we wet our whistles with a virgin cocktail: juiced cantaloupe and basil mixed with San Pellegrino Pompelmo, a sparkling grapefruit drink. It's refreshing and crisp — equal parts melon sweet and citrus tangy — perfect for a lazy summer morning.

Cocktail in hand, Dunham tosses some veggies on the grill: corn, zucchini, okra, and the Anaheim peppers. The okra and zucchini are from his plot at Shelby Farms Community Garden, where he spends one to two hours every day.

"Gardening is how I stay sane," Dunham confesses, turning the peppers. "There are days I'll go out there and just pull weeds for two hours. It's one of those mindless tasks that helps you unwind."

After the veggies come off the grill, it's time to roast the red fish. Dunham stokes the fire with some fallen tree branches, courtesy of the ancient oak trees in his backyard. This, he explains, will allow the fire to burn hotter than charcoal, while also flavoring the fish.

Back in the kitchen, he prepares a puree of roasted eggplant, tomatoes, and onions. He peels the peppers and stuffs them with corn and zucchini — a vegetarian relleno for summer. Last of all, he fries the eggs, flipping them as though it were no big deal. Had he been planning this all along?

"If you're asking me if I knew in advance what this plate was gonna look like," Dunham replies, snacking on a cherry tomato, "then the answer is, no. Really, I'm just making it up as I go along."

For an off-the-cuff brunch, it's pretty darn impressive. The fish is immaculately plated, served over eggplant puree with a tomato-and-onion slaw. It's wonderfully light and flaky — but is it weird that I like the eggplant puree best of all? It's savory and just a little sweet, flavored with basil, lemon, thyme, and oregano.

After a short grace, we tuck into our food, attacking the fried eggs and cornering the chili rellenos. As for Aaron, he's happy as a clam with his waffles.