Tom Leatherwood, the Republican state representative in House District 99, was greatly relieved on Tuesday of this week. He had just relocated in a temporary hotel after damage from the tornado that swept through Nashville on Monday night had made his regular hotel unliveable.

But he was forced to take note of a new threat taking place over the course of the current election season. That comes from an ongoing challenge to his renomination from Lee Mills, who, until a change of guard last year, served as chairman of the Shelby County Republican Party.

After former longtime State Representative Ron Lollar unexpectedly died in July 2018, with that year's election season underway, the local GOP steering committee met to select an alternate candidate for the District 99 position on the general election ballot. Mills was one aspirant; Leatherwood was another, and he ended up prevailing.

"It wasn't but two weeks or so later that I heard they were getting ready for an effort to see me defeated the next time," said Leatherwood, the "they" being Mills and his wife, Shelby County Commissioner Amber Mills. "She's using her office to promote her husband's political ambitions," he said.

Friends of Mills are now circulating a story that a delegation from the Shelby County Commission headed by Amber Mills was snubbed by Leatherwood, who allegedly declined to meet with the commissioners when the group was in Nashville last week on the occasion of Shelby County's official Day on the Hill, an annual pilgrimage to the state capital.

"That's a lie," Leatherwood said emphatically, when asked about the story. "No one ever made an appointment to see me." He said he could affirm that he himself was never contacted by the delegation. Members of his staff, like those of other legislators, could not confirm or deny the fact of an appointment request, having been asked to stay away from the Hill on Tuesday in the wake of the tornado damage.

Leatherwood said he did not fear the challenge from Lee Mills, contrasting his campaign war chest of some $100,000 with a far lesser amount he said had been raised so far by his GOP opponent.

"I've never wanted to destroy an opponent the way I want to destroy him," Leatherwood said of Mills. He boasted his own support from within Republican ranks and said the activities of Lee and Amber Mills could have the effect of indirectly helping Democrats in their designs upon other legislative positions, particularly the open District 97 House seat and the District 83 seat now held by Republican Mark White.

There are Democratic candidates in both of those races, but so far not in District 99.

In District 97, now held by the retiring Republican Jim Coley, two Democrats — Allan Creasy and Gabby Salinas, both veterans of hard-fought but losing races in 2018 — vie for the nomination, along with Ruby Powell-Dennis and Clifford Stockton III. Two Republicans, Brandon Weise and John Gillespie, who has been endorsed by Coley, also seek the seat.

Democrats once dominated the Shelby County legislative contingent but in the last few decades have had to yield the suburbs to Republicans. They have had one signal victory in their recent effort to make inroads in eastern Shelby County: Democrat Dwayne Thompson won House District 96 in 2016 in an upset over then-Republican incumbent Steve McManus; in 2018 Thompson successfully defended the seat against Republican challenger Scott McCormick.

This year, Thompson faces a primary challenge from fellow Democrat Anthony Johnson, while Republican Patricia Possel will seek the office on the Republican side. 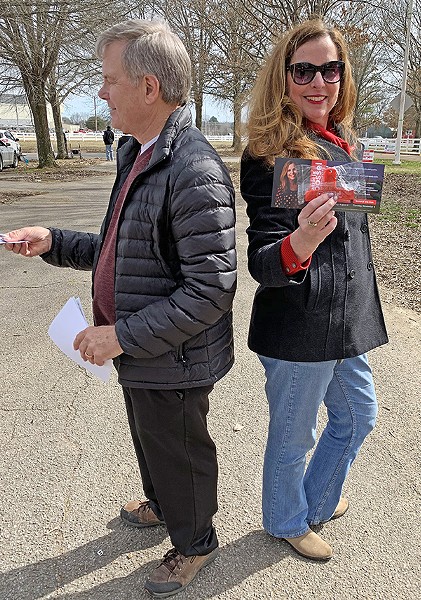